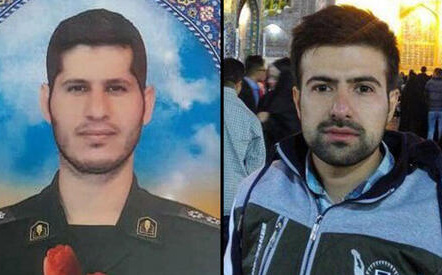 In the three weeks since Israeli operations assassinated a Revolutionary Guards colonel and killed an engineer in Iran’s Parchin military complex, a series of Guards officers and scientists have died in mysterious circumstances.

Another Guards colonel, Ali Esmaelzadeh, died at his home in a Tehran suburb in late May. Reports said he fell from a balcony, leaving open whether it was an accident, a suicide, or a murder.

Like Col. Hassan Sayyad Khodayari — killed by gunmen at his Tehran home earlier in May — Esmaelzadeh was reportedly part of the Guards’ Unit 840, which allegedly targets and other foreigners abroad for assassination or abduction.

An “Iranian official and two other people with ties to the government” said Israel is suspected of poisoning the scientists.

Entezari worked on projects related to missiles and airplane turbines for a government aerospace center in Yazd in central Iran. He developed symptoms of food poisoning after attending a dinner to which he was invited. The host of the party has disappeared and authorities are searching for him.

Israeli and Iranian diaspora outlets claimed Aghamolaei worked at the Natanz nuclear facility. His friends maintain that he worked for a private geological research company.

He had returned to Tehran from a business trip to Tabriz in northwest when he developed intense nausea and diarrhea, leading to organ failure.

“Two senior Israeli defense officials” said Israel did not kill Col. Esmaelzadeh. The Israelis have not commented on the alleged poisonings.

But Israeli Prime Minister told a Parliamentary committee, “The past year has been a year of changing course in Israel’s strategy vis-à-vis Iran. We have shifted into a higher gear. We are acting at all times and places, and we will continue to do so.

In the latest sudden deaths, Ali Kamani of the Guards’ Aerospace Division, was “martyred” in Markazi Province in central Iran on Sunday.

Later that day, Mohammad Abdous, an employee of the Defense and Armed Forces Logistics Ministry and also working in aerospace, was “martyred…during a mission” in Semnan Province in northern Iran.

Saudi-backed outlet Iran International claimed, from an unidentified source, that both men were involved in “developing arms for Lebanon’s Hezbollah”.

For years, Israel has tried to disrupt Iran’s missiles and weapons transfers to Hezbollah through bombing of sites inside Syria. An attack last Friday on Damascus International Airport, damaging runways and operational facilities, has closed the complex.