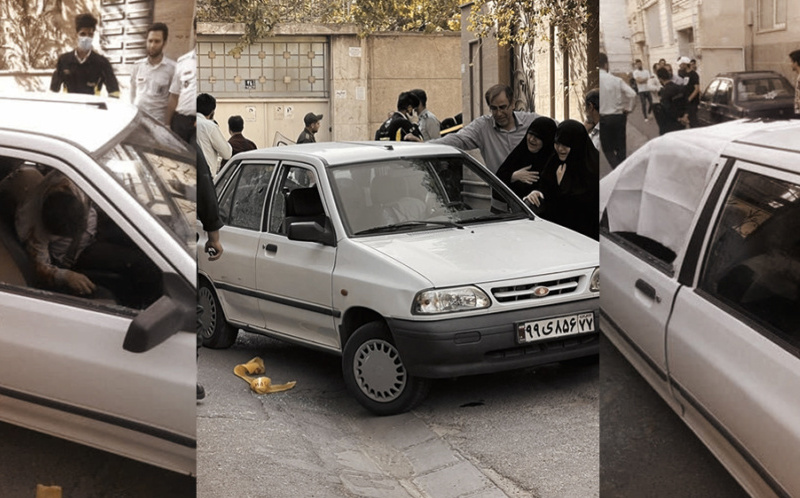 The scene of the assassination of a Revolutionary Guards member in Tehran, Iran, May 22, 2022

Israel has informed US officials that it organized the killing of Revolutionary Guards Colonel Hassan Sayyad Khodayari, according to “an intelligence official briefed on the communications”.

The Israelis said the assassination is a warning to Iran to halt the operations of Unit 840, a covert group within the Quds Force, the Guards’ branch for operations outside the Islamic Republic.

Israeli officials say Unit 840 is responsible for abductions and assassinations of foreigners around the world, including Israeli civilians and officials.

They claimed Col. Khodayari was the unit’s deputy commander and involved in the planning of cross-border plots against foreigners. Targets included Israeli, European and American civilians and government officials in Columbia, Kenya, Ethiopia, the UAE, and Cyprus.

Iran’s officials have never acknowledged Unit 840. They have said Khodayari served in Syria, where the Qods Force propped up the Assad regime and transferred weapons and technology to the regime and Lebanon’s Hezbollah.

Corroborating Iranian sources cited by Amwaj Media (see below), “two people affiliated with the Revolutionary Guards” says Khodayari was a specialist in logistics with a central role in the transfer of drone and missile technology to Assad forces and Hezbollah. They said he was also a tactical adviser to the Iran-backed militias.

Citing an Iranian source close to the Quds Force of the Islamic Revolutionary Guards Corps, Amwaj Media says the assassinated Guards Colonel Hassan Sayyad Khodayari — who served in Syria — was responsible for technology transfers to the Assad regime and to Iran’s Lebanese ally Hezbollah. Corroborating a report in Israeli media, the source said Khodayari’s expertise was in drones.

Despite that role, Khodayari was not on the Guards’ list as a potential target of assassination. He was not guarded by the IRGC’s special protection unit, Ansar Al-Mahdi, or by other Iranian security agencies protecting targets of Israel’s intelligence agency Mossad.

There is heated speculation over the motive for Sunday’s killing of Revolutionary Guards Col. Hassan Sayyad Khodayari.

Channel 13 claimed Khodayari supervised Guards member Mansour Rasouli, who targeted an Israeli diplomat in Turkey, a US general stationed in Germany, and a journalist in France.

An “Iranian security source” said Khodayari, who served in the Guards’ Quds Force during the Syrian conflict, played an “important” role in Iran’s military industry, “especially when it came to drones”.

“I insist on the serious pursuit [of the killers[ by security officials, and I have no doubt that the blood of this great martyr will be avenged,” Raisi said on Monday.

He repeated the Guards’ implicit blame of Israel and the US, “There is no doubt that the hand of global arrogance can be seen in this crime.”

Khodayari’s funeral in Tehran is scheduled for 5 p.m. today.

#Iran president said that Iranian security officials will pursue the assassination of an IRGC member, adding “I have no doubt that revenge against the criminals is inevitable”. pic.twitter.com/l4TEwCCElJ

ORIGINAL ENTRY, MAY 22: A member of Iran’s Revolutionary Guards has been assassinated in Tehran.

The victim, Hassan Sayyad Khodayari, was inside his car near his house about 4 p.m. on Sunday when he was shot five times, three times in the head and twice in the hand, by two motorcyclists. The attack was in an eastern neighborhood of the capital, ner Iran’s Parliament.

An Iranian journalist identified Khodayari as a Guards colonel. Iranian outlets said he served with the Guards’ overseas branch, the Quds Force, in Syria’s conflict as Iran propped up the Assad regime.

The Guards blamed “counter-revolutionary elements” and the “global arrogance” — its term for the US and Israel — for the attack, saying necessary measures will be been taken to identify and arrest the attackers. The head of the Tehran Court of Justice, Ali Alqasi, ordered the Tehran Prosecutor General to escalate efforts to find the perpetrators.

In recent years, Guards members have been killed by insurgents in both northwest and southeast Iran, and in September 2018, 29 people were slain in an attack on a Guards parade in Ahwaz in the south of the country.

See also Who’s Behind the Attack Killing 29 in Ahvaz in Southwest Iran?