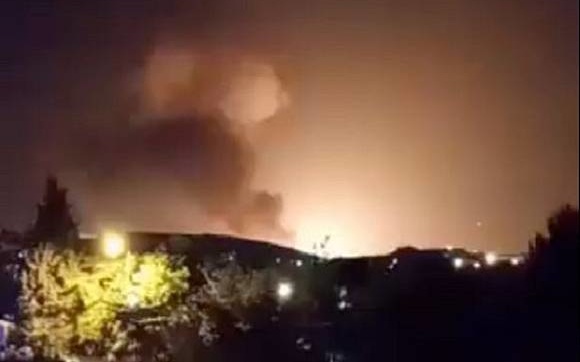 A fire burns near a military complex at Parchin, Iran after an explosion, June 26, 2020

Iran’s Parchin military complex was struck in a drone assault on Wednesday, killing an engineer, according to “three Iranians with knowledge of the attack” and a US official.

Parchin, 37 miles southeast of Tehran, is a center for development of missile, nuclear, and drone technology.

Iranian officials have not publicly acknowledged a strike, but the Iranian sources said quadcopter suicide drones hit a building for research on drone development, killing the young engineer and injuring another person.

The sources said the drones were launched from inside Iran, not far from Parchin.

Breaking the official silence on the cause of the explosion, the senior editor of the conservative Iranian news site Tabnak, Mostafa Najafi, wrote — but later deleted the tweet — that “Israel attacked a ministry of defense facility with a few suicide quadcopter drones”.

The strike was carried out a few days after the Israeli-organized assassination of Revolutionary Guards Col. Hassan Sayyad Khodayari, who reportedly oversaw the transfer of technology — including drones — to Syria’s Assad regime and Lebanon’s Hezbollah.

Iranian drones have been deployed in numerous attacks against Israel, Saudi Arabia, the UAE, Yemen, and a US base in Syria.

In early February, Israel used six quadcopter drones to damage a facility near Kermanshah in western Iran. The complex was Iran’s main manufacturing and storage plant for military drones, according to a “senior intelligence official briefed on the operation”.

Dozens of Iranian drones were destroyed. Tehran retaliated by firing ballistic missiles at a house in Erbil in northern Iraq, reportedly used by Israeli agents in the planning of attacks inside Iran.

Last June, a quadcopter drone struck the Iran Centrifuge Technology Company. Located in the city of Karaj, the company is one of Iran’s main manufacturing centers for the production of advanced uranium centrifuges.

To cripple Iran’s military and nuclear capabilities, Israel has carried out strikes and assassinations inside Iran and in countries like Syria for more than a decade. In November 2020, an Israeli-led operation assassinated Mohsen Fakhrizadeh, the chief of Iran’s nuclear program.