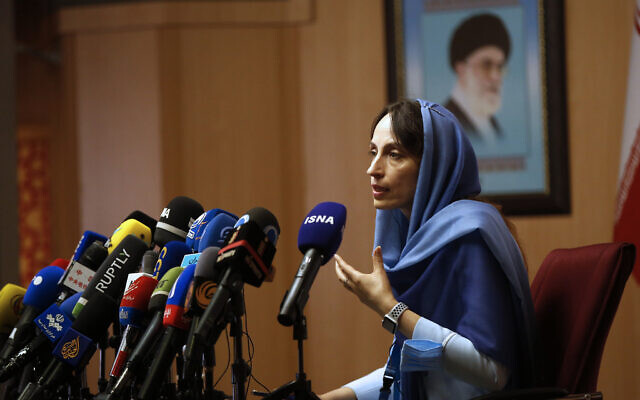 A UN official has called for the removal of “devastating” and “illegal” US sanctions on Iran.

Alena Douhan, the UN Special Rapporteur on sanctions, said after a 12-day trip to Iran:

During our visit, we were able to identify [the] devastating humanitarian impact of sanctions.

The measures imposed against Iran violate international law — they are illegal….

The best option is that they are lifted.

The Belarusian lawyer said, “I am gravely concerned about the life-threatening consequences of the high costs and in certain cases complete absence of specialised medicines and medical equipment.” She spoke of sanctions’ contribution to “inflation, growing poverty rates, and scarcity of resources to guarantee the basic needs of those most in need”.

Talks between Iran and the 5+1 Powers (US, UK, France, Germany, China, and Russia) on renewal of the 2015 nuclear deal — including American re-entry and the lifting of Washington’s sanctions — were close to resolution early this year. However, they have been stalled for months, particularly over the US designation of Iran’s Revolutionary Guards as a “foreign terrorist organization”.

Douhan told reporters, “I do not expect that [sanctions] will be lifted immediately or it will be lifted in a month. My purpose here, and the purpose of the country visit, is to analyze the situation and to bring the facts for the discussion of the world community.”

She said she hoped for further UN trips for face-to-face discussions, “I’m very much aware that no country visit took place for 17 years. I know that the government is currently cooperating with the UN to draw [up] a program of cooperation.”

Critics have questioned whether Douhan upholds the standard of an independent Special Rapporteur, noting her past activism and the circumstances of her appointment.

Reminder of who Alena Douhan is. Her position was created by a @UN_HRC res. introduced by Iran. She has defended dictatorships from Belarus (her native country) to Syria. She uses her title and its institutional legitimacy to back authoritarian regimes. Add #Zimbabwe to the list. https://t.co/dtdB3RpzxE

As the official visited, protests spread across Iran over rising food prices because of changes to Government subsidies, including on imported commodities such as wheat.