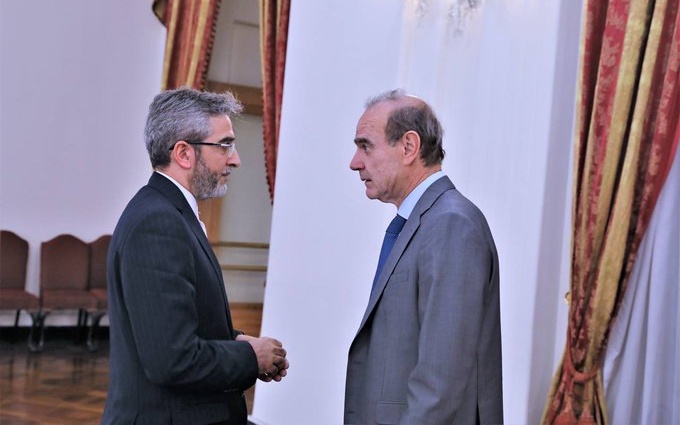 The European Union’s Enrique Mora has been embroiled in “difficult” discussions in Iran over the stalled talks to renew the 2015 nuclear deal between Tehran and the 5+1 Powers (US, UK, Russia, China, Germany, and France).

Mora, the broker of the Vienna talks, arrived in Tehran on Tuesday and left early Friday. Iran’s Foreign Minister Hossein Amir-Abdollahian posted a general statement this afternoon, restating the official Iranian line but offering no other signals.

Enrique Mora’s visit to Tehran was another opportunity to focus on initiatives to resolve the remaining issues in the #ViennaTalks. A good & credible agreement is within reach if the US makes a political decision & adheres to its commitments. Contacts continue.

The EU’s foreign policy head Josep Borrell put a positive spin on the discussions while avoiding any reference to a breakthrough.

The important thing is the outcome of his mission to Teheran. It has gone better than expected — the negotiations were stalled, and now they have been reopened. So, the travel has been very much profitable.

The negotiations — over US re-entry to the agreement, lifting of American sanctions on Iran, and Tehran’s return to compliance with the terms — were close to resolution early this year.

But they were then briefly impeded by Russia’s ultimatum, amid its invasion of Ukraine, that sanctions be removed on Moscow as well as Tehran. Facing Iranian criticism, the Kremlin stepped back, but the talks then deadlocked over the US designation of Iran’s Islamic Revolutionary Guards Corps as a foreign terrorist organization.

The US has offered to discuss removing the designation, imposed by the Trump Administration, in return for an Iranian concession on non-nuclear issues. Tehran has rejected that proposal.

The EU’s Borrell said in his statement:

The negotiations had been stalled for two months due to this disagreement about what to do the Revolutionary Guards. Mr Mora visited Iran with a concrete message from my side, saying that we could not continue like this. The answer has been positive enough in order to believe that we can relaunch the work between the parties.

But the discussions have been rocked by other developments this week. The International Atomic Energy Agency assessed that Iran has 42 kg (92 lbs.) of 60% enriched uranium, which could potentially be further enhanced to 90% grade for military use.

IAEA head Rafael Grossi told the European Parliament on Wednesday, “This is an unprecedented level of enrichment for a non-nuclear weapons state party to the [Nuclear Non-Proliferation Treaty], and it is cause for serious concern.”

Summarizing the current state of the discussions, an EU source said, “I would not be too optimistic.”