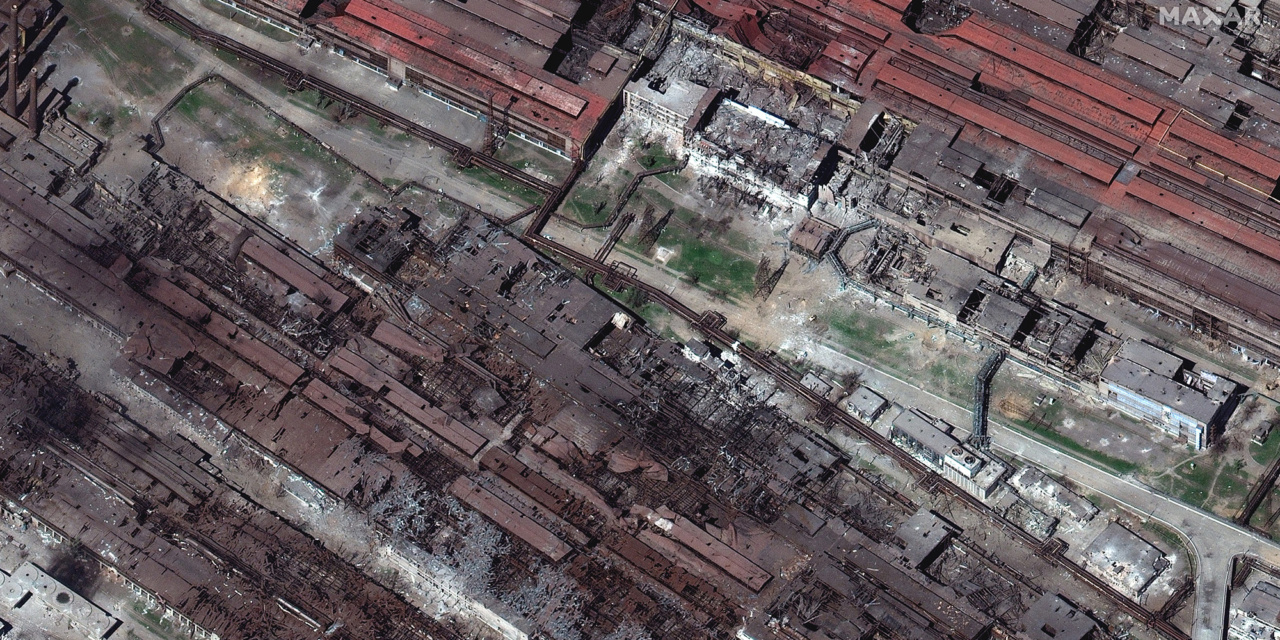 Satellite image of Russian destruction of the Azovstal steel plant in Mariupol, Ukraine (Maxar via CNN)

The European Union is expected to include a phased halt of Russian oil imports in its sixth set of sanctions on Monday.

Germany has added to the expectation with statements of its reduced dependence on Russian energy supplies.

From a German official in Brussels:

Germany is reducing its energy dependence on Russia rapidly:

Berlin has said it will halt imports of Russian gas by 2024, and of Russian oil and coal much sooner than that.

I spoke with @JosepBorrellF on the next round of EU sanctions on Russia which must include an oil embargo. I also emphasized there can be no alternative to granting Ukraine EU candidate status. We paid separate attention to further safe evacuation from besieged Mariupol.

Russia’s Defense Ministry claims that 80 civilians have now left the besieged Azovstal steel works in Mariupol for a Russian-proxy area in the Donetsk region of eastern Ukraine.

Ukraine President Volodymyr Zelenskiy says another group of 100 civilians from the besieged Azovstal steel plant in Mariupol are being evacuated by the UN.

This group — unlike about 55 civilians who were taken early in the day to a Russian proxy area in eastern Ukraine — are being transported to the Ukraine-controlled city of Zaporizhzhia, 132 mile northwest of Mariupol.

Evacuation of civilians from Azovstal began. The 1st group of about 100 people is already heading to the controlled area. Tomorrow we’ll meet them in Zaporizhzhia. Grateful to our team! Now they, together with #UN, are working on the evacuation of other civilians from the plant.

The President added that evacuations will continue on Monday at about 8 a.m.

A defense facility inside Russia is on fire.

Bryansk regional governor said there are no details yet about damage or casualties.

#Russia'n ammo depot in Kozychevo is on fire
near #Belgorod close to #Ukraine's border pic.twitter.com/SfqgLT2r3J

Allowed to leave the besieged Azovstal steel works in the city of Mariupol, another 14 civilians have arrived at a temporary accommodation center in the Russian proxy area of the Donetsk region.

The arrivals in the village of Bezimenne take the total to about 55 today.

A UN spokesperson confirmed that an evacuation is underway. Details are not being given to ensure the security of the operation.

About 40 civilians have left , and are now at a temporary accommodation center in the village of Bezimenne in the Donetsk region.

The civilians were on buses with Red Cross placards, in a convoy with Russian forces and vehicles with United Nations logos.

The Russian Defense Ministry said a total of 46 people left the steel works in two groups.

Bezimenne is in an area held by Russian proxy groups in eastern Ukraine. In late March, Ukrainian officials accused Russian forces of transferring about 5,000 Mariupol residents to “filtration camps” in Bezimenne.

Kharkiv regional governor Oleh Synyehubov has told residents of Kharkiv city not to leave shelters amid Russian attacks: “In connection with the intense shelling, we urge residents of the northern and eastern districts of Kharkiv, in particular Saltivka, not to leave the shelter during the day without urgency.”

Kuleba asked China to be among the security guarantors in a resolution of Russia’s invasion, “This is a sign of our respect and trust in the People’s Republic of China.”

Xinhua also carried Kuleba’s criticism of Russian leaders and military: “European countries panic because they cannot guarantee Russia will not invade them tomorrow. If Russia is not stopped now, it will lead to more crises a few years later.”

The Foreign Minister summarized, “Escalation is not caused by Ukraine. We are exercising our right to self-defence,” and implicitly rejected demanded for Kyiv’s “neutrality”: “Geographically and historically, Ukraine is a European country. Ukrainians… will not agree to playing a role of an East-West buffer.”

Kuleba also noted that Russia’s invasion has “compromised” China’s Belt and Road infrastructure initiative, and that the global food security crisis will threaten the Chinese economy.

Surely Xinhua asked questions in line with government wordings, but to publish Kuleba’s words verbatim — with lots of criticism of Russia — is fascinating.

The Russian Defense Ministry alleges that shelling by Ukrainian forces has killed and injured civilians in Russian-occupied areas of southern Ukraine.

The Ministry declared that shelling of villages in the Kherson region damaged a school, a kindergarten, and a cemetery.

No evidence was produced for the claims.

Russian forces seized Kherson city and the surrounding city in the first days of their invasion, but have faced regular protests by residents. Ukraine President Volodymyr Zelenskiy and other Ukrainian officials have warned that Russia is seeking to annex the area, using a staged “independence referendum” as a pretet.

ORIGINAL ENTRY: After weeks trapped inside the Azovstal steel works in besieged Mariupol in southern Ukraine, 20 civilians have been allowed to leave by Russian forces.

The wounded civilians may be on their way to Zaporizhzhia, 132 miles to the northwest, where other Mariupol residents have made their way in private vehicles. The Russians, still failing to suppress all of the city on the Sea of Azov, have rafused all organized evacuations or aid to civilians — about 100,000 of whom are still inside Mariupol — during their nine-week siege.

Satellite images released on Saturday showed that almost all the buildings of the Azovstal plant have been destroyed. Up to 1,000 civilians are in an underground shelter below the complex.

There was no further word on the deal permitting the 20 civilians to escape. Russian State outlet TASS said 25 people, including six children, had left the Azovstal plant without saying where they were heading.

“We are getting civilians out of the rubble with ropes – it’s the elderly, women and children,” Ukrainian commander Sviatoslav Palamar said.

The evacuation came amid a high-profile PR offensive by Russian Foreign Minister Sergey Lavrov, as Moscow tries to push back international economic and military aid to Ukraine.

Lavrov gave lengthy interviews to Al Arabiya TV and the Chinese news agency Xinhua on Thursday. Long extracts were reproduced, without critique, in many outlets around the world.

Among Lavrov’s lines have been a dismissal of civilian casualties in the besieged city. Russian troops are estimated to have killed twice as many civilians in two months — up to 21,000 — as German forces did throughout World War II. Satellite imagery has confirmed three recently-dug mass graves to bury victims.

Lavrov proclaimed in his interviews that almost a million Ukrainians have been moved to Russia, insisting that they were voluntary evacuations.

The Foreign Minister will appear on Italian TV on Sunday.

Ukraine Deputy Prime Minister Iryna Vereshchuk announced a prisoner exchange with Russia on Saturday. Seven Ukrainian soldiers, including a woman who is five months pregnant, and seven civilians were freed. No information was given on the number of released Russian troops.

“Ukraine Will Be Free”

In his nightly video address to the nation, President Zelenskiy pledged:

Ukraine will be free. Kherson, Nova Kakhovka, Melitopol, Berdyansk, Dniprorudne and all other temporarily occupied cities and communities in which the occupiers are now pretending to be “masters” will be liberated. The Ukrainian flag will return.

There is still a lot of work ahead. The occupiers are still on our land and still do not recognize the apparent failure of their so-called operation. We still need to fight and direct all efforts to drive the occupiers out. And we will do it.

Of course, the occupiers still have equipment in stock. Yes, they still have missiles to strike at our territory. But this war has already weakened Russia so much that they have to plan (to have) even fewer military equipment for the parade in Moscow.

In its latest report on Sunday morning, Ukraine’s military summarized the Russian offensive in the east, with more of Moscow’s forces and weapons brought in for attacks south of Izyum.