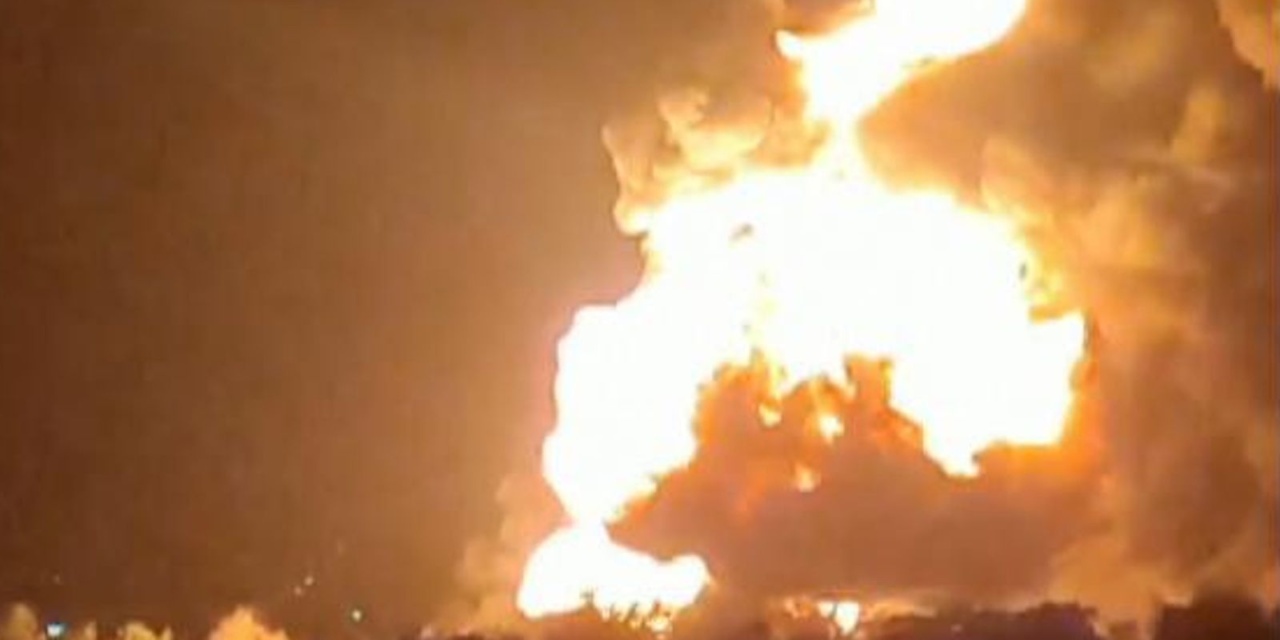 As strikes hit fuel depots in Russia’s Bryansk region, a key logistics hub for Vladimir Putin’s invasion of Ukraine, Kyiv’s officials are edging towards acknowledgement of responsibility for the attacks.

Presidential aide Mykhailo Podolyak tweeted on Friday, “Ukraine will defend itself in any way, including strikes on the warehouses and bases of the killers in Russia. The world recognizes this right.”

Josh Manning, a US-based military and intelligence analyst, and I speak with James Lee of the Daily Express about the Zelenskiy Government’s calculations over maintaining and expanding the strikes inside Russia.

Ukraine has yet to openly hit and admit striking targets on Russian soil for several key reasons according to experts who claim Kyiv does not want to start “waking the bear”.

The news comes as British Defence Minister Ben Wallace and Armed Forces Minister James Heappey both hinted that, should Ukraine decide to attack targets on Russian soil, this would not breach the international laws of conflict. With the war now into its third month, very little is known about explosions at an oil storage facility and arms dump in Russia, with some suggesting they were a result of Ukrainian strikes.

Speaking exclusively to the Express, political-military analyst Josh Manning, who was assigned to the US-European Command at JAC Molesworth, and Professor Scott Lucas both discussed their views on why Ukraine has so far held back, at least openly, when it comes to attacking Russia.

Ukraine has made it clear this is an imposed war on them and wants to defend itself first and foremost. By acting solely in a defensive manner, Ukraine is able to gain global support in its conquest to defend its territory. Attacking Russia may not gain the approval of those sponsoring Kyiv.

The professor added, “Should Ukraine strike targets in Russia, this could see Moscow blame Western powers for supplying Ukraine with weapons to do so, and cause the conflict to spread into Eastern Europe and possibly beyond.”

“The Timing is Very Right”

I think Ukraine is trying to walk the tightrope between ensuring Russia doesn’t have strategic maneuver room near the border to refit and serve its military forces without “waking the bear”.

Though, as we have seen the last months, the bear is awake and slapping at the country in a very ham-handed way.

So I’m not sure the Ukrainians are factoring in the idea of further angering Russia. Honestly, the wider they try to make the conflict by attempting strikes outside of eastern Ukraine, the better the chances are for Ukrainians to really deal another fatal blow to the Russian military.

With Britain hinting at a “green light” for Ukraine to hit Russia, Mr Manning was asked whether he thought the timing was right to do so.

Yes, the timing is very right.

Russia is deeply wounded and trying to take some time to do what it does best: a more limited conflict in its nearer abroad and with the border close for better logistical support. This is what it did in Georgia pretty well and really well with the hybrid conflict in eastern Ukraine in 2014.

“So if the goal is to further limit the Russian military’s ability to take parts of eastern Ukraine, you need to make sure you cut off the potential for success.

Both within Ukraine and, if you can covertly gum up the works inside of Russia, then you do so — but quietly. Accidents happen.

Much like Professor Lucas, Mr Manning was concerned Russia would blame the West should any strikes occur within its territory. The former intelligence analyst said:

The Kremlin will blame the West, especially NATO for any and all problems inside of Russia. They can’t say it’s Ukraine because they are supposedly winning this “special operation. If the Russian populace thinks Ukraine has this ability, they might question the regime’s messaging.

This would ramp up Russian attacks and missiles into NATO members Romania and Poland. It could also lead to wider cyber-attacks into the UK, US and elsewhere.

But I think Russians have been trying and have learned a good deal about the cyber-defense to their attacks over the last couple of decades. So they can try, but as we have seen in the last couple of months, it probably not going to be effective.