The Casualties of Trump’s Wall With Mexico 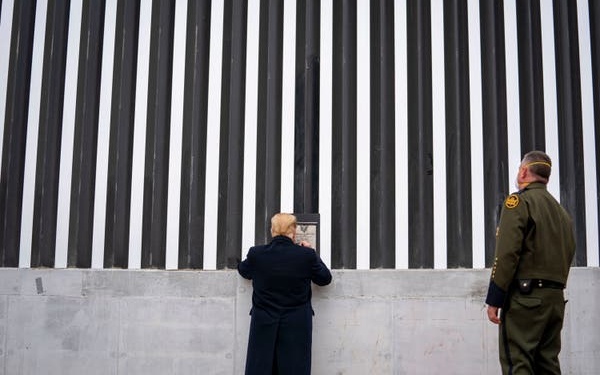 Only about 25% of Donald Trump’s “Wall with Mexico” was constructed during his four years in the White House, but that portion, costing $11 billion, has killed 16 people and injured hundreds of others.

The Washington Post reports on immigrants who have fallen from the 30-foot wall as they tried to climb it and enter the US. Nick Miroff visits hospitals in San Diego, California where patients have “gruesome injuries: skull fractures, broken vertebrae and shattered limbs, their lower extremities twisted into deranged angles”.

Customs and Border Protection officials do not keep count of deaths and injuries from the falls. However, University of California at San Diego physicians have tallied them in an article in the journal JAMA Surgery.

Since 2019, the number of border crossers treated at the UC San Diego Medical Center’s trauma ward has risen 400% to 375. There were 16 deaths, compared to zero in the period before 2019.

Hector Almeida, a 33-year-old dentist from Cuba, said as he recovered in the trauma from a fracture of his left leg, “I never expected we would have to climb the wall. He saw one woman fall and break both legs, and an older man suffer a severe head injury.

Jay Doucet, chief of the trauma division at UC San Diego Health, explained that the older, shorter version of the wall, ranging from nine to 17 feet, was not lethal.

Once you go over 20 feet, and up to 30 feet, the chance of severe injury and death are higher. We’re seeing injuries we didn’t see before: pelvic fractures, spinal cord injuries, brain injuries and a lot of open fractures when the bone comes through the skin.

At San Diego’s Scripps Mercy Hospital, border wall victims were 16% of the 230 patients treated in the trauma ward last month, a higher share than gunshot and stabbing victims. The ward admitted 139 border wall patients last year, compared to 41 in 2020.

“He Was Trying To Get Back To His Family”

The prototypes for The Wall in 2017 had a rounded, barrel-shaped top. However, Congressional funding of the barrier limited development to existing designs, and Trump preferred the intimidation of “spiky” steel bollards.

The height of 30 feet took no account of safety. Instead, it balanced cost with Customs and Border Protection’s mandate to give agents more time to respond to crossing.

Despite the risk, crossings of the barrier have increased. San Diego border agents made 16,660 arrests in March, about four times as the monthly average in 2019.

Improvised ladders are made from sections of metal rebar. More sophisticated versions use lightweight aluminum. But most injuries come from the 30-foot descent where there is no assistance.

UC San Diego Health’s Doucet says, “One thing I have noticed is the people who are falling are not as athletic as you think they would be to go up ladder like that,” Doucet said. “They are middle-aged, and a fair number of women, even pregnant women.”

Among those who have died are recent deportees, seeking a return to homes, jobs, and spouses and children. The brother-in-law of Efren Medina Villegas, 56, said simply, “He was trying to get back to his family.”

Amet Garcia Mendez, 31, was found dead in March 2020 when fell 35 feet and suffered cranial and chest fractures and multiple perforated organs. Marifer Jimon Rojas, 19, died in 2020 from a broken neck and multiple fractures to the skull and sternum. An expectant mother fell from the wall in 2019, broke her pelvis and lost her unborn son, weeks before expected delivery.

Last year activists raised almost $10,000 to medevac an 18-year-old woman who fell from the wall and suffered five broken vertebrae and a leg fracture. Taken a hospital close to her relatives in northern California. she regained the ability to walk.

But her attorney Priscilla Higuera noted the many others who do not recover. Citing Coronavirus-era border restrictions and ongoing Trump programs returning asylum seekers to Mexico, she says, “You couple this bigger, taller wall with Title 42 and ‘Remain in Mexico,’ and it’s a recipe for disaster.”

Meanwhile, with many victims lacking insurance and needing long-term care, hospitals are seeking assistance. Amy Liepert, the director of acute care surgery at UC San Diego Health, said the hospital has incurred at least $13 million in costs from border wall patients: “We need policies that fund the care that’s being delivered, in order to make sure we’re providing access for our other populations that need trauma care.”