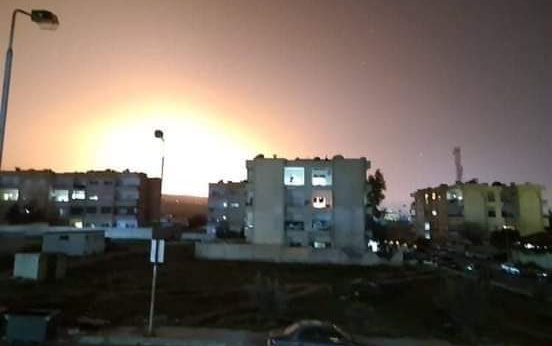 Unconfirmed claims said that the strikes targeted sites in Sayyidah Zaynab, south of Damascus, or that they set a fire near Damascus International Airport.

A leading analyst of military developments said the strike was on the airport, delaying some commercial flights.

He said that a fourth victim, the head of the Cargo Department, later died of injuries — evaluating that this pointed to an attack on an Iranian weapons shipment.

The strikes came one week after an Israeli strike killed six regime troops, all member of an air defense unit, during an attack in the Masyaf area in northwest Syria.

No target was identified, but the Assad regime’s conventional and chemical weapons complex, the Scientific Studies Research Center, is located in Masyaf.

An Israeli missile attack at 3 a.m. on Wednesday struck a site in southwest Syria, according to Syrian State news agency SANA.

The agency said the attack was near the town of Hader near the Israeli-occupied Golan Heights. It did not cite casualties, but acknowledged “material damage”.

The Assad regime’s military says four troops have been killed and three injured by Israeli strikes near Damascus.

The attack is the third by Israel this month, and the first since April 14.

A military official said surface-to-surface missiles were fired from Tiberias in northeast Israel. He issued the standard statement that most were downed by anti-air defenses.

An Israeli military drone crashed in Syria on Tuesday, with the Israeli Defense Forces investigating the cause. The IDF said no sensitive information was lost and there is no risk of intelligence being taken from the device.

Israeli warplanes have struck Assad regime territory for the second time within a week, according to the regime’s military.

The official said there were material losses, while repeated the regime’s standard line thata some of the missiles were downed.

Syrian State news agency SANA reported, “The Israeli enemy launched an aerial assault from the direction of northern Lebanon targeting a number of positions in the central region.” It did not cite any casualties.

The apparent target in Masyaf was the regime’s Scientific Studies and Research Center, which oversees development of conventional and chemical weapons.

As usual, the Assad military proclaimed that some of the Israeli missiles were downed.

The Israel Defense Forces, following standard practice, did not comment on the strikes.

The Israelis have attacked the Scientific Studies and Research Center on several occasions during Syria’s conflict, and has also targeted other chem

Satellite imagery shows the extent of damage by Israeli missile strikes on an Assad regime base near Damascus on February 9.

The strikes killed one Assad regime soldier and injured five, including three members of an air defense crew who were seriously wounded.

The University of Tehran’s Seyed Mohammad Marandi, a de facto spokesman for Iran’s authorities, has admitted that two Iranian military personnel were killed in Israel’s airstrikes on Monday.

Marandi made the admission while pushing standard propaganda lines from officials such as the Supreme Leader. He did not explain why members of Iran’s Quds Force were in “residential areas”.

The apartheid regime will pay. pic.twitter.com/BE81yjRAgf

Iran’s Revolutionary Guards later confirmed the deaths of Colonels Ehsan Karbalaipour and Morteza Saeidnejad and said Israel would “pay for this crime”.

Assad regime media said two Syrians were killed, claiming they were civilians rather than military personnel.

The Assad regime’s military claimed two civilians were killed as it admitted “material damage” from the 5 a.m. attack. The targets were not identified, but a series of Israeli strikes this year have been on regime bases with an Iranian presence.

Assad outlets said the damage was in Dahyat Harasta, an area near a regime base with housing for officers and their families.

As usual, the military asserted that it had downed most of the Israeli missiles, launched from jets flying over Lebanon.

A tweet from the State news agency purporting to show damage:

The Assad military has acknowledged the deaths of three troops in the latest Israeli airstrikes near Syria’s capital Damascus.

Military officials said the attack was about 1:10 a.m. on Thursday. They issued their standard declaration that most of the missiles were downed, but admitted “some material damage”.

Social media posts claimed the attack was on a base in the Zakiya, which Israel also struck on February 16.

On Wednesday, Israel fired surface-to-surface missiles on Assad positions in Quneitra in southwest Syria, near the Israeli-occupied Golan Heights.

The Israeli military dropped leaflets on Assad regime positions, warning troops that they could be targeted for collaborating with the Iran-backed Lebanese group Hezbollah: “To the leaders and members of the Syrian army, we have warned you and continue to warn you, we will not stop as long as your cooperation with Hezbollah continues.”

There were no reports of Syrian anti-air defenses trying to down the missiles, in contrast to claimed defense against strikes by Israeli warplanes.

The Assad military said there was “material damage” but no casualties.

Israeli warplanes have fired missiles on targets near Damascus for the second time this year.

A pro-opposition activist reports that the attack, on the northwestern outskirts of the Syrian capital, killed one Assad regime soldier and injured five, including three members of an air defense crew who were seriously wounded.

The regime’s military acknowledged the casualties, saying the Israelis struck in two waves, just before and after 1 a.m. Wednesday. It said the attack was in the Qudsaya suburb of Damascus, causing “material losses”.

The Israel Defense Forces said that it carried out a further strike, after an Assad regime missile exploded in mid-air near the city of Umm Al-Fahm in northern Israel: “In response to the anti-aircraft missile launched from Syria earlier tonight, we just struck surface-to-air missile targets in Syria, including radar & anti-aircraft batteries.”

ORIGINAL ENTRY, JAN 31: Israel’s warplanes have fired missiles on targets near Damascus, a week after joint air patrols by Russian and Assad regime forces along the Israeli-occupied Golan Heights.

Syrian State news agency SANA reported the strikes on Monday at 3:05 a.m., citing “material damage” without details or reference to casualties. As usual, the Assad military issued the unsupported claim that anti-aircraft defenses downed several of the missiles.

In December, Israel twice bombed containers at the major Syrian port of Latakia on the Mediterranean, causing substantial damage. There was widespread criticism, by Syrians in Assad regime territory, of Russia’s failure to challenge the attacks despite positioning S-400 advanced anti-air systems in the country.

The regime and Iran were further unsettled by Russia not including regime personnel in its air maneuvers, leading to last week’s high-profile announcement of joint patrols.

Israel has regularly attacked during the 129-month Syrian conflict to prevent Iran transferring missiles, weapons, and equipment to its Lebanese ally Hezbollah, another essential backer of the Assad regime. The strikes have escalated since the autumn, as the Israeli press for Iran’s military withdrawal and the prevention of an Iranian-Hezbollah presence in southwest Syria near Golan Heights.

Monday’s strikes were the ninth set in three months. Most of the targets have been regime and Iranian bases and warehouses near Damascus and Homs.