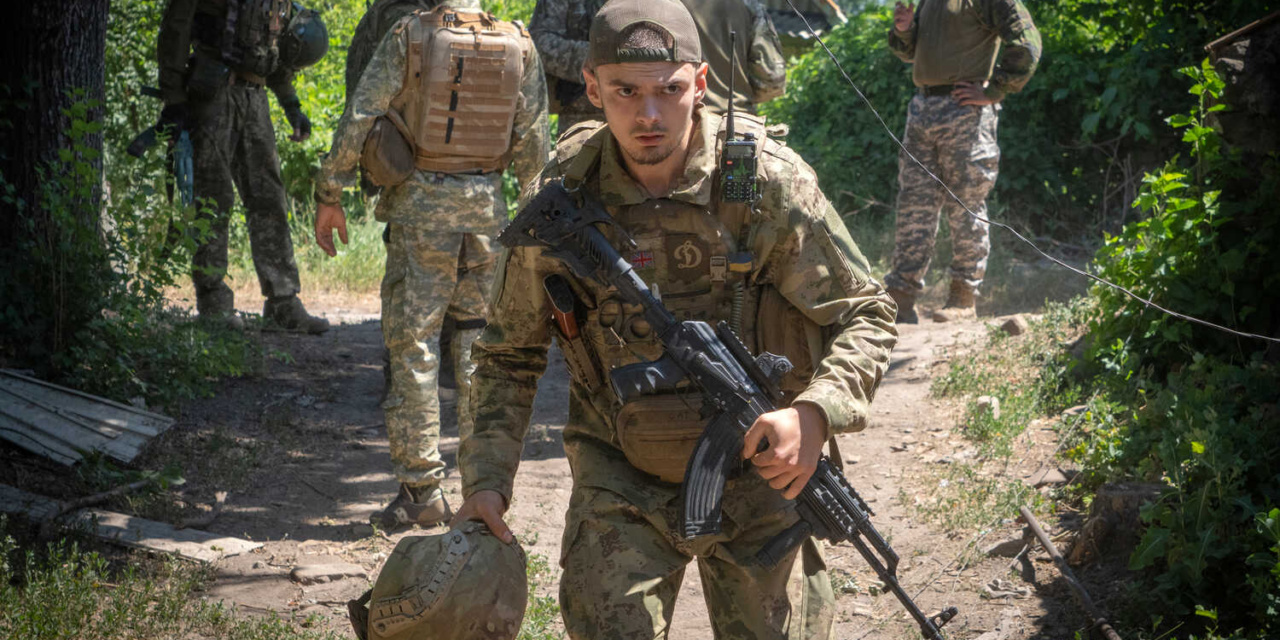 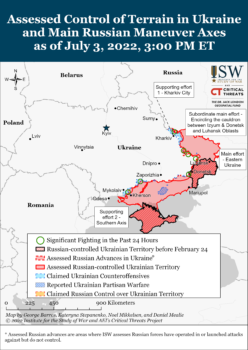 The cases were established by field visits and interviews conducted with more than 500 victims and witnesses of human rights violations, and with other sources of information.

The DPR told shipping companies that the Liberia-flagged Smarta bulk vessel and Panama-flagged Blue Star I are the subject of “forcible appropriation of movable property with forced conversion into state property”.

The Liberian ship was hit by shelling on March 20. Its 19-member crew were detained and taken by the Russian military to Donetsk, where they were released in April.

Switzerland has pushed back on a Ukrainian proposal to fund its reconstruction through seizure of frozen Russian assets.

On Monday Ukrainian Prime Minister Denys Shmyhal told the Ukraine Recovery Fund conference, in the Swiss city of Lugano, that up to $500 billion of frozen assets could be part of the $750 billion reconstruction.

Swiss President Ignazio Cassis said at the conference’s closing press conference, “The right of ownership, the right of property is a fundamental right, a human right.” That right could only be overtaken, as in the Coronavirus pandemic, only on a legal basis.

“You have to ensure the citizens are protected against the power of the state. This is what we call liberal democracies,” Cassis asserted.

The mayor of Slovyansk in the Donetsk oblast, facing Russian assault, has told remaining residents to evacuate.

Donetsk Governor Pavlo Kyrolenko summarized, “Once again the Russians are intentionally targeting places where civilians assemble. This is terrorism pure and simple.”

Slovyansk Mayor Vadim Lyakh said 144 people, including 20 children, have been evacuated on Tuesday.

Slovyansk is about 43 miles east of Lysychansk in the Luhansk oblast, which Russian forces occupied last weekend.

An advisor to Mariupol’s exiled mayor claims that only 3% of the occupied city’s remaining residents have access to water.

He added that there are no doctors left in the city.

Mariupol had a pre-invasion population of about 400,000, reduced to about 100,000 following Russian bombardment, siege, and ground attacks. Mayor Vadym Boychenko said more than 22,000 people died during the three-month Russian assault.

#Mariupol mayor's advisor Andryushchenko informs there are no doctors there anymore. The last 17 russians have just left. More than 100k ppl incl kids are left w/o healthcare or medications, in town w no drinking water & amidst many chaotic burials. Let alone the heat. Terrifying

AM bringing the Finns and Swedes into the protection of collective defense.

Meanwhile, Finland and Sweden can join in NATO meetings and have greater access to intelligence.

NATO Secretary General Jens Stoltenberg, said, alongside the Finnish and Swedish Foreign Ministers, “This is truly an historic moment. With 32 nations around the table, we will be even stronger.”

Just took part in historic NAC meeting where 🇸🇪 and 🇫🇮 accession protocols were signed by all NATO allies. Thank you for your support! Now the process of ratification by each of the Allies begins. Look forward to working together in ensuring our collective security. #WeAreNATO pic.twitter.com/9VNyBwk0Es

US basketball star Brittney Griner, detained in Russia since mid-February, has asked for help from President Joe Biden to free her.

Griner was seized a week before Vladimir Putin’s invasion of Ukraine, with Russian officials claiming that she was smuggling hashish oil in vape cigarettes.

I’m terrified I might be here forever. I realize you are dealing with so much, but please don’t forget about me and the other detainees. Please do all you can to bring us home….

On the 4th of July, our family normally honors the service of those men who fought for our freedom, including my father who is a Vietnam War Veteran. It hurts thinking about how I usually celebrate this day because freedom means something completely different to me this year.

Unable to overrun the port city of Mykolaiv, Russian forces have regularly fired missiles on civilian areas, killing scores of people. Mayor Oleksandr Sienkevych said rescuers, medics, emergency crews, and utility workers are working on the sites hit this morning, but there is no information yet on casualties.

The Russians fired seven missiles on the Dnipropetrovsk region overnight. Governor Valentyn Reznichenko said six were downed, but one hit a residential area in the city of Pokrovsk, damaging a few houses.

ORIGINAL ENTRY: With Russia occupying all of the Luhansk oblast in eastern Ukraine, Kyiv’s forces have taken up defensive positions in their areas of the neighboring Donetsk region.

The last Ukraine-held city in Luhansk, Lysychansk, was seized by the Russians last weekend as defenders pulled out before they were surrounded. Lysychansk’s sister city Sievierodonetsk was finally occupied almost two weeks ago, after a 3 1/2-month defense.

Luhansk Governor Serhiy Haidai noted that the Ukrainian defense had drawn in most of Russia’s troops, preventing them from fighting elsewhere, and had given Ukraine time to build fortifications in the Donetsk region to make it “harder for the Russians there”.

He echoed the calls of Ukrainian leaders, such as President Volodymyr Zelenskiy, for international allies to provide more weapons, countering Russia’s 10:1 advantage in artillery that was decisive in the Luhansk attacks.

The governor said the arms supply would not ensure a successful defense, but also enable Ukrainian forces to launch a counteroffensive when they had sufficient long-range weapons.

Russia turned to an all-out offensive in the east in early April, after failing to capture cities such as the capital Kyiv and second city Kharkiv and withdrawing from northern Ukraine. Moscow and its proxies now hold about 75% of the Donbas region, comprised of Luhansk and Donetsk.

This is the last victory for Russia on Ukrainian territory….

Taking the cities in the east meant that 60% of Russian forces are now concentrated in the east and it is difficult for them to be redirected to the south.

And there are no more forces that can be brought in from Russia. They paid a big price for Sievierodonetsk and Lysychansk.

Zelenskiy said in his nightly video address to the nation:

The Armed Forces of Ukraine respond, push back and destroy the offensive potential of the occupiers day after day.

We need to break them. It is a difficult task. It requires time and superhuman efforts. But we have no alternative.

He said “the key war battle is still yet to come”, probably not in the east but in the south with Ukraine’s counter-offensive in the Kherson region and along the Black Sea coast.

We see the Ukrainians are making progress around Kherson. There are counter-attacks beginning there and I think it’s most likely that we’ll see the momentum swing to Ukraine as it tries to then mount a large-scale counter-offensive to push the Russians back.

The US-based Institute for the Study of War noted Vladimir Putin’s comment on Monday that Russian units who attacked Lysychansk should rest and recover combat capabilities. While the remark is likely a public signal of Putin‘s concern for the welfare of troops, amid complaints over treatment of Russian soldiers, it is “also likely accurate — Russian troops that fought through Severodonetsk and Lysychansk very likely do need a significant period in which to rest and refit before resuming large-scale offensive operations”.

The ISW adds, “It is not clear, however, that the Russian military will accept the risks of a long enough operational pause to allow these likely exhausted forces to regain their strength.”

Perhaps the most significant assessment comes from inside Russia. Former military commander Igor Girkin, who led Russian proxy fighters during the 2014 war in Donbas, questioned the significance of the seizure of Lysychansk and suggested that Russian forces paid too high a price for a limited gain.

Girkin noted that the Ukrainian defense was deliberately designed to inflict maximum damage on Russian troops and use up Russian manpower and equipment. While noting — before Putin’s remarks — that Russian troops need time to rest and replenish, he said this will allow Ukrainian troops to seize the initiative and further threaten Russian gains.

“A Conference for the Recovery of Ukraine”

In his nightly address, Zelenskiy hailed the Ukraine Recovery Conference, which began in Lugano, Switzerland on Monday.

Ukrainian Prime Minister Denys Shmyhal told the conference $750 billion is needed for reconstruction, with more than $100 billion of direct damage to infrastructure from Russia’s attacks so far.

He added that the Ukrainian Government believes some of the funding can come from assets confiscated from Russian oligarchs.

Ukrainian forces liberated more than a thousand settlements from the occupiers, and new ones are added every week. Now, for example, in the south of our country. All of them suffered large-scale destruction. And this also means the need for colossal funds for the restoration of infrastructure, for the return of medicine and social services, for the restoration of normal economic life. There are tens of thousands of destroyed houses alone in the liberated areas….