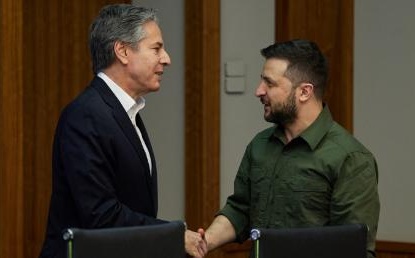 EA on RTE: Holding Back Russia in Ukraine

Ukraine's Defense Minister says Ukraine is already starting to receive 155mm calibre artillery — the standard Nato size — from the US and from other partners, including France. He predicts that longer-range weaponry will ‘fundamentally’ change fight with Russia. – @FT

Russian strikes have killed four people, including a 9-year-old girl and a 14-year-old boy, in the Donetsk region in eastern Ukraine, according to governor Pavlo Kyrylenko.

Four people, including two children, were killed in eastern Ukraine on Monday.

The governor of the Donetsk region, Pavlo Kyrylenko, said on Telegram that a nine-year-old girl and a 14-year-old boy were killed in the region where Russia is on the offensive.

UK Defence Minister Ben Wallace says about 15,000 Russian troops have been killed in Vladimir Putin’s invasion of Ukraine. He added:

Alongside the death toll are the equipment losses and in total a number of sources suggest that to date over 2,000 armored vehicles have been destroyed or captured.

He added that Russia has lost more than 60 helicopters and fighter jets.

The Ukrainian military has said that more than 21,000 Russian troops have been slain. A pro-Kremlin outlet, quoting the Russian Defense Ministry, said last week that 13,414 troops have been killed and 7,000 are missing. It soon deleted the report.

A senior Russian diplomat has ruled out any ceasefires with Ukraine, only hours after Moscow posed with the offer of a halt to attacks on besieged Mariupol.

Dmitry Polyanskiy, Russia’s first deputy permanent representative to the UN, said a ceasefire is not “a good option” as Kyiv could use it to “stage provocations”.

Earlier on Monday, the Russian Defense Ministry had again said it would allow trapped civilians out of the Azovstal steel works in Mariupol, but — as on previous occasions — showed so sign of fulfilling the offer.

Russian officials have previous issued “surrender or die” ultimatums to the defenders in the steel works.

The UK has announced a new package of military equipment to Ukraine.

Defence Secretary Ben Wallace told the House of Commons that the aid includes “a small number” of Stormer missile launcher vehicles and 250 Starstreak anti-air missiles, in addition to anti-tank 5,361 NLAWs and 200 Javelins.

In addition, Challenger 2 tanks will be sent to Poland to “bridge the gap” between Warsaw’s donation of Soviet-era T-72s to Kyiv and the arrival of new US-made tanks.

Forensic doctors have spoken of evidence that Ukrainian women were raped before they were shot and killed by Russian forces.

A team of coroners has carried out dozens of autopsies on victims from the Kyiv-area towns of Bucha, Irpin, and Borodyanka. Details are not being given until hundreds more bodies are examined.

The coroners examine about 15 bodies a day, many of them mutilated.

Dr. Vladyslav Pirovskyi said, “There are many burned bodies, and heavily disfigured bodies that are just impossible to identify. The face could be smashed into pieces, you can’t put it back together, sometimes there’s no head at all.”

He said the bodies of some women indicated they were killed by automatic gunfire, with up to six bullet holes in their backs.

The company will restore them armored vehicles over coming months before shipping them to Kyiv.

However, Switzerland has held up any delivery, blocking the re-export of Swiss-made ammunition used by the vehicles, according to the Swiss paper SonntagsZeitung.

Russian missile strikes on Sunday night killed one person and injured seven in the industrial city of Kremenchuk, according to Poltava regional governor Dmytro Lunin.

“Nine enemy missiles…hit the Kremenchuk thermal power plant and the Kremenchuk oil refinery,” Lunin wrote on Telegram. He said shelling of the city was the heaviest since the Russian invasion began.

Five railway stations in western and central Ukraine were attacked within an hour. Ukrainian Railways head Oleksander Kamyshin said there are casualties.

The governor of the Luhansk Oblast in eastern Ukraine, Serhiy Haidai said “the entire region was shelled heavily by the Russians” on Easter Sunday. An oil refinery was struck for the third time. Three high-rise buildings and four private houses were burned and destroyed, and several vehicles damaged.

“People were rescued not only from underneath the rubble, but from the crushed vehicles as well,” Haidai wrote.

Ukraine will prosecute the Russian pilot of a downed Su-34 fighter-bomber for war crimes, with the possibility of a life sentence if he is convicted.

The Prosecutorʼs Office said there was “reasonable suspicion” that Alexander Krasnoyartsev “was bombing the territory of Ukraine, including civilian objects, with air bombs”

Krasnoyartsev was detained on March 5 in Chernihiv in northern Ukraine after allegedly bombing the area. They claim that the pilot shot and killed a civilian as he tried to evade capture.

Another pilot, Konstantin Krivolapov, was killed in the downing.

Activists say Krasnoyartsev also bombed civilian areas in Syria between 2015-2017 and in 2020, with more than 200 sorties.

The UK Defence Ministry notes that its Russian counterpart is suggesting that compensation for the families of dead servicemen should be overseen by military rather than civilian officials.

The British analysts assess, “This likely reflects a desire to hide the true scale of Russia’s losses from the domestic population.”

The UK report also says that while Russian forces have made ”minor advances” in its offensive in eastern Ukraine, “without sufficient logistical and combat support enablers in place, Russia has yet to achieve a significant breakthrough”.

A Russian oil depot is burning in the city of Bryansk.

Residents heard explosions about 2 a.m. and said there were fires in several districts. Reports said another blaze is in the area of a unit of the Defense Ministry’s Main Missile and Artillery Directorate.

[Russian state media later said the first fire occurred at a civilian facility with 10,000 tons of fuel, and the fire at a military fuel depot holding 5,000 tons.]

Russian officials have not yet commented on the cause of the fire.

ORIGINAL ENTRY: Ukraine President Volodymyr Zelenskiy has hosted top-level American officials, who pledged more military assistance and a return of US diplomats to the country this week.

The US officials announced $322m in foreign military financing for Ukraine and almost $400m for 14 other allied and partner countries, covering their supplies to Kyiv.

The US has now provided $3.7bn to Ukraine since the invasion. Last week President Joe Biden announced a $800m package includes howitzers, ammunition, and advanced drones.

Blinken said career foreign service officer Bridget Brink will be nominated by Biden as US Ambassador to Ukraine. Brink has been Ambassador to Slovakia since 2019, previously serving in Serbia, Cyprus, Georgia, and Uzbekistan and with the National Security Council.

The Ambassador’s post has been vacant since 2019, when Donald Trump removed Marie Yovanovitch over her opposition to Trump’s attempt to coerce Zelenskiy into speaking Biden, then running for the Democratic nomination for President.

The Secretary of State added that US Embassy staff, who have relocated to Poland, will begin making day trips to Lviv in western Poland in coming days.

Defense Secretary Austin will now go to Germany, meeting counterparts from more than 20 countries and NATO Secretary General Jens Stoltenberg at the US air base at Ramstein.