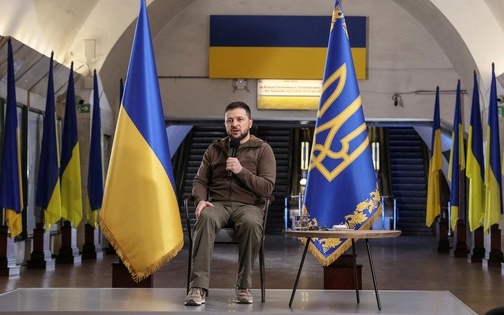 Will Ukraine Unite A Divided America? (No.)

Dozens of civilian victims of mass killings in Bucha, northwest of Kyiv, were slain by tiny metal arrows, fléchettes, from shells used by Russian artillery units.

Pathologists and coroners said the fléchettes were embedded in victims’ heads and chests.

Each tank or field gun shell can contain up to 8,000 darts, which disperse in a conical arch about 300m wide and 100m long.

The Organization for Security and Cooperation in Europe is “extremely concerned” after several of its Ukrainian staff have apparently been arrested in Russian proxy areas in eastern Ukraine./p>

The OSCE is extremely concerned that a number of @OSCE_SMM national mission members have been deprived of their liberty in Donetsk and Luhansk and is using all available channels to facilitate their release.

Russian proxy security services in the Luhansk area said this month that they arrested two OSCE members. According to the Russian State outlet TASS, one “confessed” to passing “confidential military information to representatives of foreign special services”, leading a high treason investigation.

The UN refugee agency UNHCR said the number of refugees from Ukraine since Russia’s invasion is 5,186,744.

The UN’s International Organization for Migration estimates more than 7.7 million people have been displaced within Ukraine.

The total of about 14 million internally displaced or refugees is almost 1/3 of Ukraine’s population of 44 million. Almost two-thirds of Ukrainian children have had to flee their homes.

The majority of the refugees — almost 2.9 million — have gone to Poland.

Speaking at the St Sophia Cathedral in Kyiv, he continued:

The Lord and the holy heavenly light are on our side. We are going through very difficult ordeals. Let us reach a just end on this path, the beginning of a happy life and prosperity of Ukraine.

On Easter, we ask God for great grace to make our dream come true. This is another great day, the day when great peace will come to Ukraine.

Switzerland has held up the delivery of German infantry fighting vehicles to Ukraine, blocking the re-export of Swiss-made ammunition, according to the Swiss paper SonntagsZeitung.

The Marder armored vehicle use the munitions, but Switzerland restricts the re-export of war materiel to conflict zones.

The office of Ukraine’s Prosecutor General says the Russian invasion has killed 213 children and injured 389.

The toll does not include casualties from areas such as besieged Mariupol.

The Ukrainian military says 21,800 Russian troops have been killed during the invasion.

These are the indicative estimates of Russia’s combat losses as of April 24, according to the Armed Forces of Ukraine. pic.twitter.com/iUOV7RaDle

Turkey has closed its airspace to Russian planes flying to Syria.

The step is a significant limit on a 2016 agreement between Turkish President Recep Tayyip Erdoğan and Russian counterpart Vladimir Putin, establishing each side’s military freedom of action in their respective spheres of influence amid Syria’s 11-year conflict.

Turkish Foreign Minister Mevlüt Çavuşoğlu said he had informed Russian counterpart Sergey Lavrov, “We closed the airspace to Russia’s military planes – and even civilian ones – flying to Syria. They had until April, and we asked in March.

Four days after the February 24 invasion, Turkey closes the Bosporus and Dardanelles Straits to Russian warships.

ORIGINAL ENTRY: In an event with both symbolic and political significance, Ukraine President Volodymyr Zelenskiy has held an underground press conference in Kyiv.

Saturday’s conference showed the defiance and immediate defeat of Russia’s invasion, almost two months after Vladimir Putin failed to seize the capital and detain or kill Ukrainian leaders. But it also showcased Zelenskiy’s message that more weapons are needed to vanquish Russia’s effort to seize territory in the east and south of the country.

More than 200 journalists were summoned to the Khreshchatyk metro station, descending several hundred meters into a Soviet-era chamber for the Independence Square stop. The President spoke from a silver dais, in front of a Ukrainian flag and trident, as trains rolled past the gathering.

The president arrived at 7.30pm local time, flanked by Ukrainian commandos. It was Zelenskiy’s biggest media event since Moscow promised in February to “demilitarise” and “de-Nazify” Ukraine. The Kremlin plan to seize Kyiv within days failed and has now morphed into an open-ended war of conquest.

It was held a day before US Secretary of State Antony Blinken and Defense Secretary Lloyd Austin arrive in Kyiv, the first visit by high-level American officials since the February 24 invasion.

Zelenskiy said the US and UK had provided the “best military support”, but the new phase of the war required action on an “armaments list” that he will present to the Americans. The military materiel will ensure Ukraine retakes Russian-occupied areas.

He praised European leaders who have come to Kyiv for meetings and to see the evidence of Russia’s war crimes, including mass killings of civilians, and added the hope that US President Joe Biden will visit once the security situation allows the trip. However, Zelenskiy He said Ukraine does not need “tragic selfies” but planes and tanks.

“A War for Ukraine’s Freedom”

Asked if illness might have driven Putin to order the invasion, Zelenskiy responded:

The Russian Federation always wanted something like this to happen. A lot of Russians don’t believe we are independent. We are attempting to repel an encroaching invasion. We are struggling for the right to live. It’s a war for Ukraine’s freedom.

He said of the Russian military, as he cited its murder of civilians, including women and children, and widespread rape, “These are Russian Nazis. They will for ever be inscribed in the history books as barbarians.”

The President referred to Saturday’s attack by five Russian missiles on Odesa in southern Ukraine, killing eight people and wounding 18. Among the dead was a three-month-old baby.

Try to grasp it. The war started when the child was a month old. These are pure bastards. They are monsters. It’s horrifying. They don’t care.

In another Russian attack on Saturday, six civilians were killed in the village of Girske in the Lugansk region in eastern Ukraine.

Zelenskiy also mentioned Russia’s “monstrous” ongoing siege and bombardment of about 100,000 trapped people in Mariupol in southeast Ukraine. Noting the latest attacks on the Azovstal steel plant, the main area of resistance, he said Kyiv had offered to trade the 1,000 civilians trapped inside for captured Russian servicemen; however, the Kremlin had refused offers of “pragmatic dialogue”.

The President added that if Russia kills any Mariupol defenders, or proceeds with an “independence” referendum in occupied areas of southern Ukraine, he will suspend peace negotiations.

“How Did She Threaten Russia?”

In his late-night video address to the nation, Zelenskiy again cited Russia’s killings in Odesa, asking about the slain three-month old girl, “How did she threaten Russia?”

He noted the confirmation of mass graves to bury the slain civilians of Mariupol, saying, “We are talking about tens of thousands of dead…residents.”

And he referred to Russian “filtration camps”, where Ukrainian citizens are taken for forcible transfer to Russia, likening them to Nazi concentration camps.