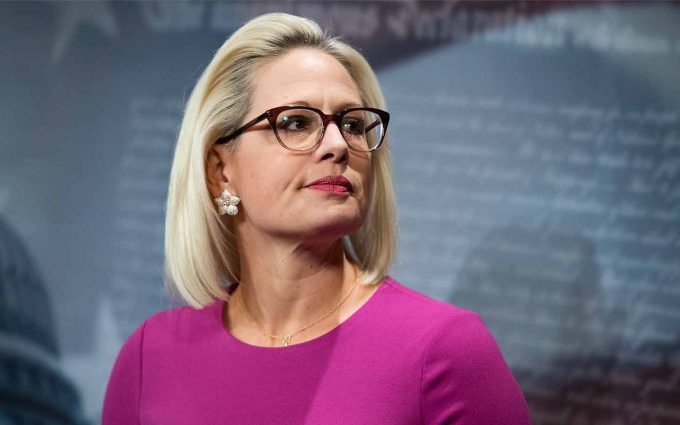 Sinema pre-empted Biden’s meeting with senators at the Capitol, declaring on the Senate floor that she would not accept any change to the filibuster blocking most Government legislation.

In a 50-50 Senate, the votes of Democrats Sinema and Sen. Joe Manchin of West Virginia are needed to remove the filibuster. For months, each has stood in the way of alterations, holding up Biden’s social and environment as well as the two voting rights bills: the For The People Act and John Lewis Voting Rights Advancement Act.

Biden appeared to concede defeat after the session with senators, “Like every other major civil rights bill that came along, if we miss the first time, we come back and try it a second time. We missed this time.”

The President met with Sinema and Manchin on Thursday night, after Senate Majority Leader Chuck Schumer of New York deferred any consideration of the legislation until next Tuesday.

Sinema insisted that she backed the bills but maintained that a change in the filibuster would stoke political division:

These bills help treat the symptoms of the disease, but they do not fully address the disease itself. And while I continue to support these bills, I will not support separate actions that worsen the underlying disease of division infecting our country.

While Democratic colleagues questioned Sinema’s maneuver and arguments, Senate Minority Leader Mitch McConnell of Kentucky — who blockaded most legislation in the Obama and Biden Administration — cheered a “conspicuous act of political courage” that “saved the Senate as an institution”.

Earlier on Thursday, the House had passed a repackaged combination of the two voting rights bills by 220 to 203. Almost all ll Republicans voted No.

Rep. Debbie Wasserman Schultz, Democrat of Florida, said on the House floor: “There are people who don’t want you to vote, and they are using every tool in the toolbox to make it harder. Voter suppression has not been consigned to the history books. It is here today, right now.”

ORIGINAL ENTRY, JAN 12: President Joe Biden calls for a new voting rights law to “protect the heart and soul” of the US.

After months of hesitation, Biden endorsed a change to the rules of the Senate filibuster, “getting rid of” it in the case of voting rights.

The President highlighted the challenge to democracy by juxtaposing civil rights icons and those who had held out against them, standing for segregation and racial discrimination.

I ask every elected official in America: How do you want to be remembered?

The filibuster has allowed Republicans to block indefinitely any advance on voting rights and other major legislation. Currently, in a 50-50 Senate, 60 votes are needed to end the blockade of a bill.

A change to the rules requires the support of all 50 Democrats. However, Senators Joe Manchin of West Virginia and Kyrsten Sinema of Arizona have fervently objected to any alteration, including over voting rights.

Biden spoke in Georgia, which is at the heart of the challenge over voting and democracy. In November, Biden narrowly won the state in the Presidential election, the first Democrat to do so since 1992. Two months later, Democrats Raphael Warnock and Jon Ossoff defeated incumbent Senators Kelly Loeffler and David Perdue. Republican State officials withstood pressure from Donald Trump, including a series of phone calls and threats, to overturn the outcome.

But this spring the Republican-controlled Georgia legislature was among the first in the US to pass legislation restricting voting rights and access, hoping to prevent further Democratic victories.

Biden summarized on Tuesday, “The goal of the former president and his allies is to disenfranchise anyone who votes against them. Simple as that.”

The Freedom to Vote Act, introduced in the US Congress early this year, blocks the restriction of mail-in or absentee voting, declares Election Day a holiday, and prevents state legislators from redrawing districts to discriminate against minority voters. The John Lewis Voting Rights Advancement Act restore anti-discrimination provisions of the 1965 Voting Rights Act, which has been weakened by a series of Supreme Court rulings.

Sen. Manchin responded cautiously to Biden’s speech, saying that the Senate needs “some good rule changes to make the place work better, but getting rid of the filibuster doesn’t make it work better”.

Republican Minority Leader Mitch McConnell of Kentucky pledged to oppose any change to the filibuster on Monday, “Republicans will show how this reckless action would have immediate consequences.”