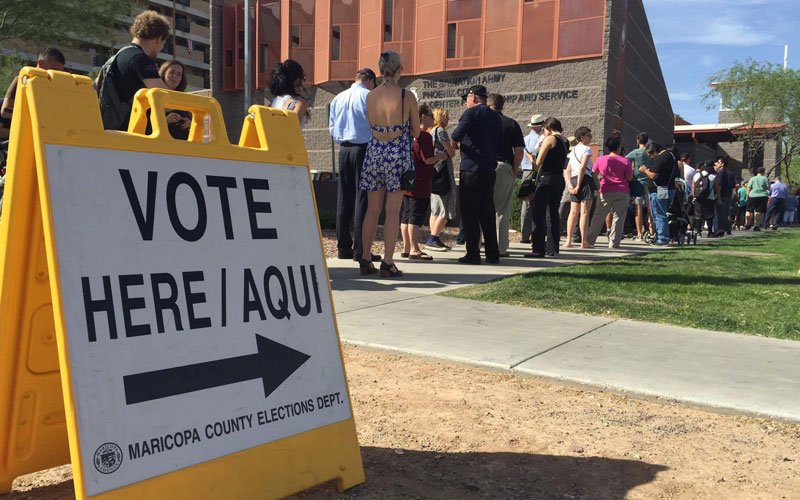 The Supreme Court has upheld voting restrictions in Arizona, indicating that it will protect efforts by Republican-controlled state legislatures to implement measures across the country.

The Court voted 6-3 on Thursday in the most significant case in decades over the Voting Rights Act of 1965.

The six conservative justices ruled that the Act can only block restrictions when they effectively prevent minority voters from casting a ballot at all.

Justice Samuel Alito wrote for the majority, “Where a state provides multiple ways to vote, any burden imposed on voters who choose one of the available options cannot be evaluated without also taking into account the other available means.”

Justice Elena Kagan argued in the dissent that the majority had diluted the Act, reinstating the discrimination that the historic legislation addressed:

Wherever it can, the majority gives a cramped reading to broad language. And then it uses that reading to uphold two election laws from Arizona that discriminate against minority voters….

Congressional Democrats are pursuing passage of the For the People Act to protect and expand voting rights. However, Republicans are using a filibuster — which can only be overturned with 60 votes in the 100-seat Senate — to prevent consideration of the measures.

Meanwhile, Republican-controlled legislatures in Florida and Georgia have pushed through restrictions after Donald Trump’s efforts to overturn the November 2020 election. A bill in Texas was only blocked by a Democratic walkout in the Senate.

The Justice Department has filed suit against the Georgia law, but Richard Hasen, a law professor at the University of California, Irvine, wrote, “The Court today also makes it harder to prove intentional racial discrimination in passing a voting rule, making it that much harder for D.O.J. to win.”

The Supreme Court had already effectively removed the central provision of the Voting Rights Act. It ruled that federal approval of state changes was not required, even over restrictions in parts of the US with a history of discrimination.

President Joe Biden responded on Thursday in a statement about the “severe damage” to the Act:

After all we have been through to deliver the promise of this nation to all Americans, we should be fully enforcing voting rights laws, not weakening them.

While this broad assault against voting rights is sadly not unprecedented, it is taking on new forms. It is no longer just about a fight over who gets to vote and making it easier for eligible voters to vote. It is about who gets to count the vote and whether your vote counts at all.

In her dissent, Justice Kagan noted the likely consequences of the ruling as Republicans try to limit participation in electinos:

In recent months, state after state has taken up or enacted legislation erecting new barriers to voting. Those laws shorten the time polls are open, both on Election Day and before. They impose new prerequisites to voting by mail and shorten the windows to apply for and return mail ballots. They make it harder to register to vote and easier to purge voters from the rolls. Two laws even ban handing out food or water to voters standing in line.

Some of those restrictions may be lawful under the Voting Rights Act. But chances are that some have the kind of impact the act was designed to prevent — that they make the political process less open to minority voters than to others.