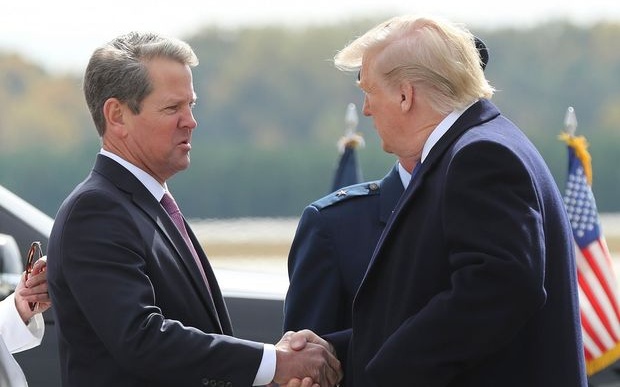 Donald Trump made a third call to Georgia State officials demanding they overturn the November election. Legal analysts say the pressure could amount to criminal obstruction of justice.

The Washington Post revealed a Trump call in late December to a top Georgia election investigator, telling him to “find the fraud”. He said the official would be a “national hero” if he did so.

The call came a week before Trump’s January 2 call to Secretary of State Brad Raffensperger, ordering him “to find 11,780 votes, which is one more than we have because we won the state”, and threatening Raffensperger and his general counsel Ryan Germany with criminal prosecution if they did not do so.

In early December, he called Republican Governor Brian Kemp and Raffensperger, seeking a session of the Georgia legislature to dismiss the vote and appoint Trump electors rather than President-elect Biden’s for the Electoral College vote on December 14.

Biden’s victory by 11,779 votes in Georgia, which had not voted for a Democratic Presidential candidate since 1992, was confirmed after a full audit and then a complete hand recount of the ballots.

The Justice Department added to Trump’s pressure with the command to the top federal prosecutor in Atlanta to resign.

Trump called Trump called the investigations chief for Raffensperger’s office on December. The investigator was leading an audit of more than 15,000 ballots in Cobb County, an Atlanta suburb that favored Biden by a large margin.

The Trump camp claimed the county’s election officials improperly accepted mail ballots with signatures that did not match those on file. State officials ultimately found no basis for the allegations.

Raffensperger confirmed on Friday that Trump placed the call. He said he was not familiar with the specifics, but added, “That was an ongoing investigation. I don’t believe that an elected official should be involved in that process.”

Trump has repeatedly attacked Gov. Kemp and Raffensperger, both Republicans, over their refusal to award him Georgia’s 16 electoral votes, including in his January 2 call — “[Georgians] hate the governor, and they hate the Secretary of State. I will tell you that right now.”

Raffensperger and his wife, as well as other Georgia election officials, have received threats of sexual violence and even death.

At his Wednesday rally, instigating a crowd to go to the Capitol and block the Congressional confirmation of the Electoral College vote, Trump called Kemp and Raffensperger “corrupt”.

Nick Akerman, a former federal prosecutor in New York and member of the Watergate prosecution team, said of the Decmeber 23 call, “Oh my God, of course that’s obstruction — any way you cut it.”

Akerman noted that Trump’s effort to identify the investigator, obtain a phone number, and call “shows that he’s trying to influence the outcome of what’s going on”.

Robert James, a former prosecutor in Georgia’s DeKalb County, said proof of obstruction would hinge on Trump’s statements, his tone, and the clarity of his intentions.

James said this would be difficult to establish without audio. He said the later call with Raffensperger, released in full, is more damning.

An early draft of articles of impeachment, circulated by Democratic legislators on Friday , mentioned Trump’s call to Raffensperger as an example of “prior efforts to subvert and obstruct” Congressional certification of the election.

Pushing Out Atlanta’s Top US Attorney

Just before the top US attorney in Atlanta, Byung J. Pak, abruptly resigned on January 4, he was pressed by Acting Deputy Attorney General Richard Donoghue.

Pak was also upset by Trump’s criticism of him during the January 2 call with Secretary of State Raffensperger: “You have your never-Trumper US attorney there.”

The US attorney had planned to announce his departure on Monday, but accelerated the process and resigned immediately rather than giving notice.

The Justice Department’s Donoghue and Acting Attorney General Jeffrey Rosen have been berated by Trump for not achieving the reversal of Biden’s victory, according to “a person familiar with the conversations”.