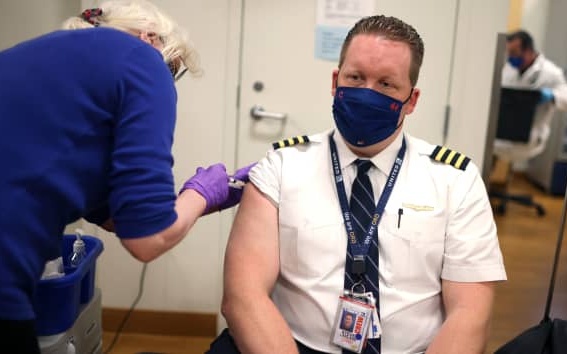 In a 6-3 decision, the Supreme Court blocks the Biden Administration vaccine-or-test requirement for large employers.

The Court does permit a requirement for about 10 million health care workers at facilities receiving federal money to be vaccinated. Conservative Justice Brett M. Kavanaugh and Chief Justice John Roberts joined moderate justices in a 5-4 majority.

While welcoming the ruling on health workers, President Joe Biden expressed disappointment in the verdict on the company requirements which were “grounded squarely in both science and the law”.

Biden issued the order for requirements last October, instructing all private companies with more than 100 workers to ensure vaccination or weekly testing: “Even after all of these efforts, we still have more than a quarter of the people in the United States who are eligible for vaccinations but didn’t get the shot.”

The order, covering more than 80 million workers, had an immediate effect with some employers. United Airlines has protected more than 99% of employees. Delta, with financial penalties and testing requirements, raised its rate to 90% from 75%. Tyson Foods’ vaccination take-up has soared to more than 96% from less than 50%.

The Biden Administration estimated that implementation would lead to about 20 million employees finally receiving vaccinations, as well as about 2 million in the health care sector.

Lawyers for the Administration said in federal court in late November that blocking the requirements would “likely cost dozens or even hundreds of lives per day”. But opponents claimed the Occupational Safety and Health Administration exercised its legal authority to implement Biden’s order.

Federal court rulings held up vaccination of more than two million workers in hospitals and nursing homes after Attorneys General of 14 states sued the Administration.

“Who Decides on Protection from COVID-19?”

The unsigned majority opinion said the pandemic’s risks did justify the requirements on businesses, as they were “a blunt instrument” and “a significant encroachment into the lives — and health — of a vast number of employees” which had not been authorized by Congress.

Dissenting Justices Stephen Breyer, Sonia Sotomayor, and Elena Kagan countered that the ruling blocked “the federal government’s ability to counter the unparalleled threat that COVID-19 poses to our nation’s workers”.

Underlying everything else in this dispute is a single, simple question: Who decides how much protection, and of what kind, American workers need from Covid-19? An agency with expertise in workplace health and safety, acting as Congress and the president authorized? Or a court, lacking any knowledge of how to safeguard workplaces, and insulated from responsibility for any damage it causes?…

As disease and death continue to mount, this court tells the agency that it cannot respond in the most effective way possible.

The decision leaves a patchwork of different pandemic responses across US states, as individual companies decide whether employees must vaccinate or test weekly. Three of America’s largest employers, Walmart, Amazon, and JPMorgan Chase have issued no requirements.

In the case of health workers, in facilities receiving funds for Medicare or Medicaid, the 5-4 majority ruled that the federal requirements were within the Congressional authority given to the Health and Human Services Secretary.

Federal judges in Missouri and Louisiana had blocked the vaccinations, suspending implementation in about half of US states.

The Supreme Court majority responded — in contrast to the dismissal of health considerations in the case of private companies — by citing health and safety requirements for federal employees.

All this is perhaps why health care workers and public health organizations overwhelmingly support the secretary’s rule. Indeed, their support suggests that a vaccination requirement under these circumstances is a straightforward and predictable example of the “health and safety” regulations that Congress has authorized the secretary to impose.

Writing for the minority, Justice Clarence Thomas argued that without “exceedingly clear” Congressional authorization, the Federal Government cannot require health care workers “to choose between losing their livelihoods and acquiescing to a vaccine they have rejected for months”. He insisted, “These cases are not about the efficacy or importance of Covid-19 vaccines.”