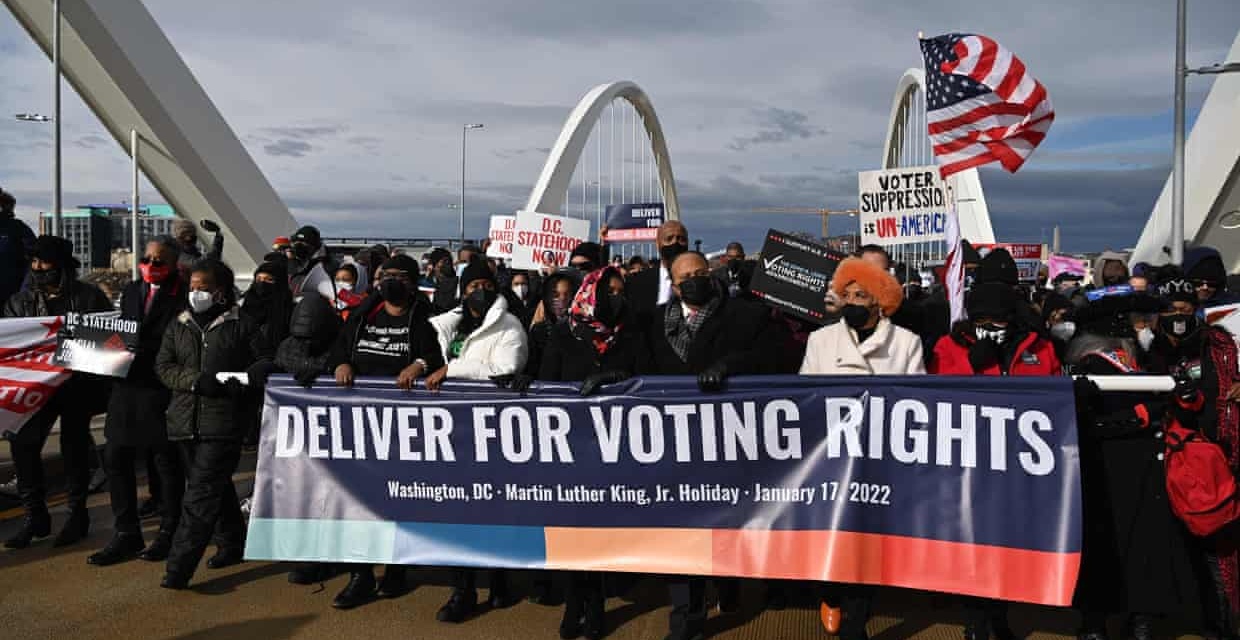 After a day of debate, the GOP invoked the filibuster for the fifth time to prevent further consideration of the bill, a combination of the For the People Act and the John Lewis Voting Rights Advancement Act.

In the 50-50 Senate, 60 votes are required to end the filibuster. The White House and Senate Democratic leadership are seeking an exemption for the voting rights bill — a step requiring only a simple majority — but Democratic Sens. Joe Manchin of West Virginia and Kyrsten Sinema of Arizona again joined Republicans in preventing any revision of the blockade in a 52-48 vote.

Throughout the day, proponents of voting rights presented emotional, reasoned arguments. Sen. Raphael Warnock of Georgia — where the Republican-controlled state legislature has imposed further restrictions on those rights — said, “History is watching us.”

Vice President Kamala Harris said she presided over the session to show “the President and I are not going to give up on this issue. This is fundamental to our democracy.”

But Senate Minority Leader Mitch McConnell of Kentucky responded with a simple dismissal: “The Senate will be saved tonight.”

The Senate opened debate of voting rights legislation on Tuesday, with the Democratic leadership facing an uphill battle over a Republican blockade supported by Democratic senators Joe Manchin of West Virginia and Kyrsten Sinema of Arizona.

Voting rights supporters are seeking an exception to the filibuster, which prevents consideration of a bill unless it is overturned by 60 votes in the 100-seat chamber.

“If the Senate cannot protect the right to vote, which is the cornerstone of our democracy, then the Senate rules must be reformed,” Majority Leader Chuck Schumer said on the Senate floor.

Win, lose or draw, members of this chamber were elected to debate and vote, especially on an issue as vital to the beating heart of our democracy as voting rights. The public is entitled to know where each senator stands on an issue as sacrosanct as defending our democracy.

The National Association for the Advancement of Colored People wrote Democratic senators, “What good is preserving a dysfunctional tradition of bipartisanship if bipartisanship cannot even preserve democracy?. It is morally inconsistent to praise voting rights legislation while allowing a procedural rule to tank it.”

But Senate Minority Leader Mitch McConnell continued the obstruction by vilifying the Democrats, “A faction this desperate for unlimited short-term power is a faction that must be denied it.”

Sen. Manchin, who has enabled the Republican intransigence on issues from voting rights to climate change to the Biden social and environmental budget, repeated on Tuesday that he will not back a change to the filibuster: “I just don’t know how you break a rule to make a rule.”

The annual peace across the Frederick Douglass Memorial Bridge took place on Monday amid the Republican blockade in the Senate — enabled by Democratic Senators Joe Manchin and Kyrsten Sinema — of the For The People Act and the John Lewis Voting Rights Advancement Act.

The Senate returns on Tuesday to debate the legislation. However, a Republican filibuster will prevent any vote unless there are 60 votes to overcome the obstacle — a near-impossibility in a 50-50 chamber.

Last week, in a passionate speech, President Joe Biden finally backed a change in fiiibuster rules, an alteration requiring only a majority vote. However, Manchin and Sinema have been steadfast in opposing any modification.

DaMareo Cooper, the co-chairman of the Center for Popular Democracy, said during the march:

I hope they do the right thing tomorrow. But if not, expect to hear from our communities. Expect for this not to just be something that you get to do and hide behind the filibuster.

We are paying attention. We will be in the streets. We will protect our rights.

Alabama State Rep. Terri Sewell invoked King’s “mountain top” from his speech at the 1963 March on Washington: “We are once again at that precipice. This is our mountain moment. Will we give up? Give out? Or will we keep pressing forward?”

At a subsequent news conference, Martin Luther King III spoke of Manchin and Sinema, recalling his father’s words about the “white moderate who is more devoted to order than to justice”: “History will not remember them kindly.”

My father was surrounded by people who told him to wait until a more convenient time and to use more agreeable methods. Fifty-nine years later, it’s the same old song and dance.

Arndrea Waters King, the president of the Drum Major Institute and the wife of Martin Luther King III, offered a positive message, “We’ve seen what President Biden and Senate Democrats can do when they commit. They delivered a historic [$1 trillion] bill that will improve our country’s infrastructure.”

Pelosi summarized, “If you really, truly want to honor Dr. King, don’t dishonor him by using a congressional custom as an excuse for protecting our democracy.”

“Our Freedom to Vote is Under Assault”

Our freedom to vote is under assault….Voter suppression laws can make it more difficult to vote for as many as 55 million Americans, or one out of six people in the country.

The proponents of these laws are not only putting in place obstacles to the ballot box; they are also working to interfere in our elections, to get the outcomes they want and discredit those they do not. That is not how democracy works.

On Martin Luther King Jr. Day, we must commit to his unfinished work – of delivering jobs and justice, and protecting the sacred right to vote. pic.twitter.com/kS1sRnGAwS

It’s critical that we shift our priorities so that our freedom to participate in the democracy via the vote isn’t threatened and thwarted by bipartisanship politics and agendas, but is cemented in our constitution and in our collective conscience.

We must say to our Senate that voting rights is not an ephemeral effervescent domestic issue that can be kicked about by reactionary guardians of the status quo. It is rather an eternal moral issue which may well determine the destiny of our nation.

In Washington, Monsignor Raymond East, 71, of Avila Catholic Church, explained why he was marching in freezing rain: “I can’t think of another time in my life when we were at a juncture like this — where we have the opportunity for us to do the right thing and act on the side of justice and democracy.”