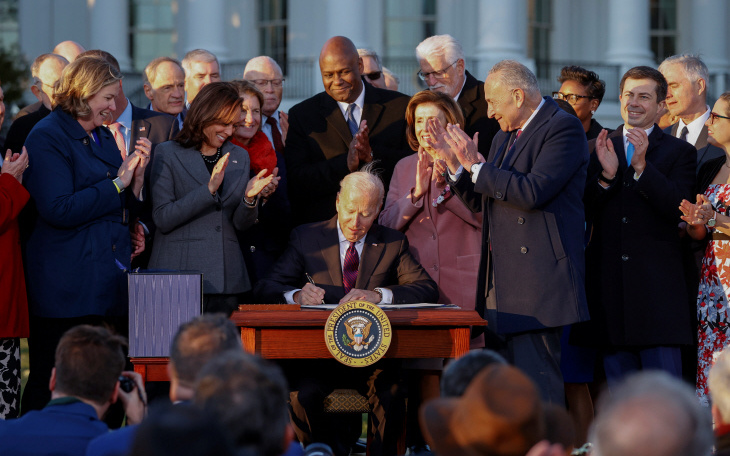 Surrounded by a bipartisan group of legislators who negotiated the final version, Biden said on the South Lawn of the White House:

Let’s remember what we’ve got done for the American people when we do come together. I truly believe that 50 years from now, historians are going to look back at this moment and say, that’s the moment America began to win the competition of the 21st century.

Biden said of the legislation, with more than $550 billion in new funding, “My message to the American people is this: America is moving again and your life is going to change for the better.”

Folks, too often in Washington the reason we didn’t get things done is because we insisted on getting everything we want. Everything.

With this law, we focused on getting things done. I ran for president because the only way to move our country forward in my view was through compromise and consensus.

The President also hopes for passage of the $1.85 trillion social-environmental budget this week. Combining that with infrastructure, he will visit a New Hampshire bridge on Tuesday, and tour a General Motors’ electric vehicle assembly plant in Detroit on Wednesday. Other senior Administration officials, including Vice President Kamala Harris, will be travelling through the US.

See also Threats Against 13 House Republicans Who Voted for Infrastructure

Republican Sen. Rob Portman of Ohio, one of the 10 senators who negotiated the revision of Biden’s original $2.3 trillion proposal, said at the White House ceremony, “This bipartisan support for this bill comes because it makes sense for our constituents, but the approach from the centre out should be the norm, not the exception.”

A final vote is still awaited on the $1.85 trillion budget for social and environmental policies, with six Democrats withholding their assent until a nonpartisan analysis confirms costs and revenues.

The vote for infrastructure, initially labelled the American Jobs Plan by the Biden Administration, was completed on Friday night. It came after weeks of negotiations among Democrats about the linkage with the budget, which has been blockaded by Senate Republicans and Democratic Sens. Joe Manchin and Kyrsten Sinema.

The infrastructure plan, with $550 billion in new money over 10 years, funds repair and construction of tunnels, bridges, roads, and broadband. There is $50 billion for climate resilience as communities face fires, floods, storms and droughts from global warming.

President Joe Biden said in a statement after the vote, “Tonight, we took a monumental step forward as a nation. Generations from now, people will look back and know this is when America won the economic competition for the 21st century.”

He will speak from the White House about the plan at 9:30 am Saturday.

At 9 pm, Biden appealed for legislators to pass both infrastructure and the budget, initially called the American Families Plan but renamed the Build Back Better Act.

An hour later, five centrist Democrats issued a written commitment to back the budget in mid-November if the cost and revenue assessment upholds its numbers. That persuaded progressives, who have insisted on the linkage of the bills, to proceed with the infrastructure vote.

Speaker Nancy Pelosi said about the day’s negotiations, “Welcome to my world — this is the Democratic Party. We are not a lock-step party. It’s an additional challenge, but I see every challenge as an opportunity.”