Rep. Jordan: I Will Not Cooperate with House Committee Investigating Capitol Attack 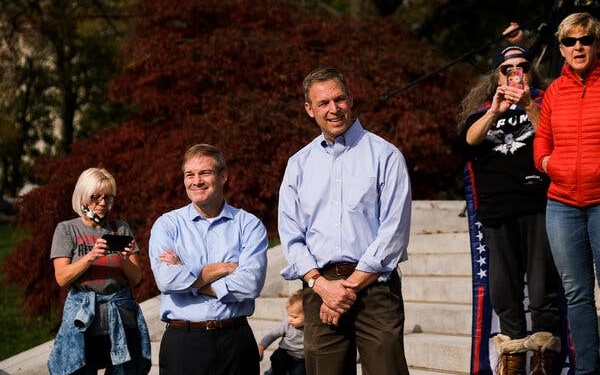 Rep. Jim Jordan of Ohio, one of six Republican legislators involved in planning with the Trump camp before the January 6, 2021 attack on the US Capitol, says he will not cooperate with the House select committee investigating the event.

Jordan wrote committee chairman Rep. Bennie Thompson of Mississippi on Sunday night, “Your attempt to pry into the deliberative process informing a Member about legislative matters before the House is an outrageous abuse of the Select Committee’s authority.”

Rep. Scott Perry of Pennsylvania, another of the six Republicans, has also defied the committee’s request.

A committee spokesperson said the panel will respond to Jordan’s letter in the “coming days” and will “consider appropriate next steps”:

Mr. Jordan has admitted that he spoke directly to President Trump on January 6th and is thus a material witness. Mr. Jordan’s letter to the committee fails to address these facts.

See also EA on PTV World: Biden, The Capitol Attack, and the Defense of US Democracy
Biden and Harris on Capitol Attack Anniversary: “The American Spirit is Being Tested”

Peter Navarro, a senior advisor in the Trump White House, has spoken openly about the plot to block Joe Biden from becoming President.

Beginning with the recitation of Trump’s lie of a “stolen election”, Navarro said on Tuesday that “100 Congressmen and Senators were ready to implement” the plan to deny certification of Biden’s victory in six states — Michigan, Pennsylvania, Georgia, Wisconsin, Nevada, and Arizona.

Navarro insisted that the process was legal. He did not mention the objections of White House counsel Pat Cipollone that the plan by Trump attorney John Eastman — for seven states rather than six — was “political suicide”.

Cipollone made his statement in a White House meeting on January 4, two days before the Congressional certification of Biden. Vice President Mike Pence’s refusal to go along with the scheme effectively blocked it.

Navarro insisted that the plan started “beautifully” on January 6 when Sen. Ted Cruz of Texas and Rep. Paul Gosar of Arizona led objections to the certification.

Challenged by host Ari Melber, “Do you realize that you are describing a coup?”, Navarro responded with the conspiracy theory that Secretaries of State in Pennsylvania and Michigan were “put in power by George Soros”, and blame of a “betrayal” by Vice President Pence’s office.

The House committee on the Capitol Attack has asked Rep. Jim Jordan of Ohio, one of the Republican legislators involved with Donald Trump’s plot to overturn the November 2020 election, to appear for an interview with committee investigators.

The panel wants to interview Jordan, a diehard Trumpist, about his messages with Trump, Trumm’s legal team, and others scheming to block the Congressional certification of Joe Biden’s Electoral College victory: “We understand that you had at least one and possibly multiple communications with President Trump on Jan. 6. We would like to discuss each such communication with you in detail.”

Jordan was involved in planning meetings with senior Trump officials, including at Trump campaign headquarters in Arlington, Virginia in November 2020 and at the White House last December.

On January 5, Jordan forwarded a message to White House Chief of Staff Meadows from a former Pentagon inspector general, setting out a plan for Vice President Mike Pence to block Biden’s certification. Pence, who was chairing the joint session of Congress, refused to intervene.

The Ohio Republican has acknowledged speaking with Trump on January 6, but claims he cannot remember how many times they spoke or when the calls occurred.

The committee also wants to discuss with Jordan whether he spoke with Trump about pardons for those involved in any aspect of criminal activity on that day.

Rep. Scott Perry of Pennsylvania, one of six GOP legislators involved in Donald Trump’s schemes to overturn the November 2020 election, is defying a subpoena from the House select committee investigating the Capitol Attack.

They join other former Trump personnel such as chief strategist Steve Bannon, White House Chief of Staff Mark Meadows, and Justice Department official Jeffrey Clark. Bannon and Meadows have been charged with contempt of Congress, and Clark is likely to follow.

Perry, the incoming chair of the hard-right House Freedom Caucus, called the committee “illegitimate”: “I decline this entity’s request and will continue to fight the failures of the radical Left who desperately seek distraction from their abject failures.”

On Monday, the committee sent a letter seeking testimony and documents from Perry, the first legislator to be summoned. Spokesman Tim Mulvey said:

Representative Perry has information directly relevant to our investigation.

ORIGINAL ENTRY: Alongside Donald Trump and his Chief of Staff Mark Meadows, six Republican Representatives were central in the plot to overturn the November 2020 election of President Joe Biden.

The House members were part of the hard-right House Freedom Caucus, which Meadows led before he joined the Trump Administration. They harassed the Justice Department with unsupported claims of voter fraud. They supported Trump and Meadows’ pressure on State legislatures to throw out Biden’s electors and replace them with Trump’s slate. And they schemed to disrupt Congressional certification on January 6, the day of the Capitol Attack, of Biden’s Electoral College victory.

The six men are:

*Rep. Scott Perry of Pennsylvania, the coordinator of the group;

*Rep. Jim Jordan of Ohio, the bombastic former wrestler who made his name with insults and misinformation on cable TV and in House hearings;

*Rep. Andy Biggs of Arizona, who built his political career on a $10 million sweepstakes win;

*Rep. Paul Gosar, the Arizona dentist who was criticized by his siblings as he spread conspiracy theories and spoke at a white nationalist rally. This autumn, he posted an animated video depicting him killing Rep. Alexandria Ocasio-Cortez of New York and assaulting President Biden;

*Rep. Louie Gohmert of Texas, another purveyor of conspiracy theories and a Coronavirus denier who sued Mike Pence over the Vice President’s refusal to block Biden’s certification

*Rep. Mo Brooks of Alabama, who called on listeners to stop Congress’s confirmation of Biden’s victory in his warm-up act for Trump’s January 6 speech outside the White House.

On December 27, Perry called Deputy Acting Attorney General Richard Donoghue to assail him with the false claims of a stolen election.

Perry and others had been given Donoghue’s mobile phone number by Trump, who was increasingly frantic in his attempts to cling to office.

Donoghue refused to bow to pressure, as Trump rebuffed the Justice Department officials’ statements that there was evidence of widespread election fraud: “Just say that the election was corrupt + leave the rest to me and the R. Congressmen.”

On January 4, Trump tried to replace Acting Attorney General Jeffrey Rosen with a loyalist, Jeffrey Clark, who had promoted the fraud claims. The effort was blocked by a threat by senior Justice Department officials, including Rosen and Donoghue, to resign en masse. White House counsel Pat Cipollone warned Trump that the step would be “political suicide”.

Meadows and Clark, then a Justice Department official, now face contempt of Congress charges for their refusal to cooperate with the House select committee on the Capitol Attack.

The Plot with Trump and Meadows

The meeting set out the tactics: declare a fraudulent election and announce legal action. McEnany said at a press conference later in the day, “This election is not over. Far from it.”

The Congressmen flooded cable TV, radio, and rallies with the false declarations. Brooks said he would never certify Biden’s victory. Jordan proclaimed that ballots were illegally counted in Pennsylvania after the election, contrary to state law. Gohmert claimed “rampant” voter fraud and pushed the false conspiracy theory that the US military in Germany seized computer servers which had switched votes from Trump to Biden. Gosar demanded that Arizona Gov. Doug Ducey investigate voting equipment that was at the heart of the conspiracy theories.

When Attorney General William Barr — who had protected Trump through the Russia and Ukraine investigations — said on December 1 that there was no evidence of widespread fraud, the representatives escalated their efforts.

As Gohmert suggested the FBI could not be trusted to investigate election fraud, Biggs said the Trump camp needed “the imprimatur” of the Justice Department.

Meanwhile, Meadows coordinated with the organizers of the “Stop the Steal” rallies for January 6. He mediated disputes, including over whether there should be one or two gatherings before the march on the Capitol. The plan was developed for Trump to declare election fraud in his speech, then for legislators to take over the certification process with the disinformation.

The Plot and the Capitol Attack

On December 21, Trump met with Meadows and members of the Freedom Caucus, including Jordan, Gosar, Biggs, and Brooks.

Gosar tweeted afterwards, “This sedition will be stopped.” Perry introduced Trump to Jeffrey Clark, laying the foundation for the plan to install him as Acting Attorney General.

After the December 27 phone call from call from Perry — “I had never heard of him before that day” — Deputy Acting General Donoghue passed the legislator’s claims to Scott Brady, the US Attorney for the Western District of Pennsylvania. Brady assessed that the claims “were not well founded”.

But the plot continued. As the “Stop the Steal” rallies were organized, Jordan forwarded a message to Meadows from a former Pentagon inspector general:

On January 6, 2021, Vice President Mike Pence, as President of the Senate, should call out all the electoral votes that he believes are unconstitutional as no electoral votes at all — in accordance with guidance from founding father Alexander Hamilton and judicial precedence.

The proposal intersected with a two-page memorandum from Trump’s lawyer John Eastman — who would speak at the January 6 gathering outside the White House — for Pence to throw out Biden electors from seven states. That would take the decision to the House, where a Republican majority of state delegations would choose Trump.

But just before noon on January 6, Pence issued a letter that he would not block certification, saying the choice of the President belonged “to the American people, and to them alone.”

Trump denounced Pence for not having “the courage to do what should have been done to protect our country and our Constitution”.

Within an hour, his supporters invaded the Capitol building, with some calling for the executions of Pence and legislators.

Despite the failure to keep Trump in the White House, the six Representatives have benefitted politically: Perry is now leader of the Freedom Caucus, and Jordan is in line for a committee chair if the Republicans retake the House majority in 2022.