Biden and Harris on Capitol Attack Anniversary: “The American Spirit is Being Tested” 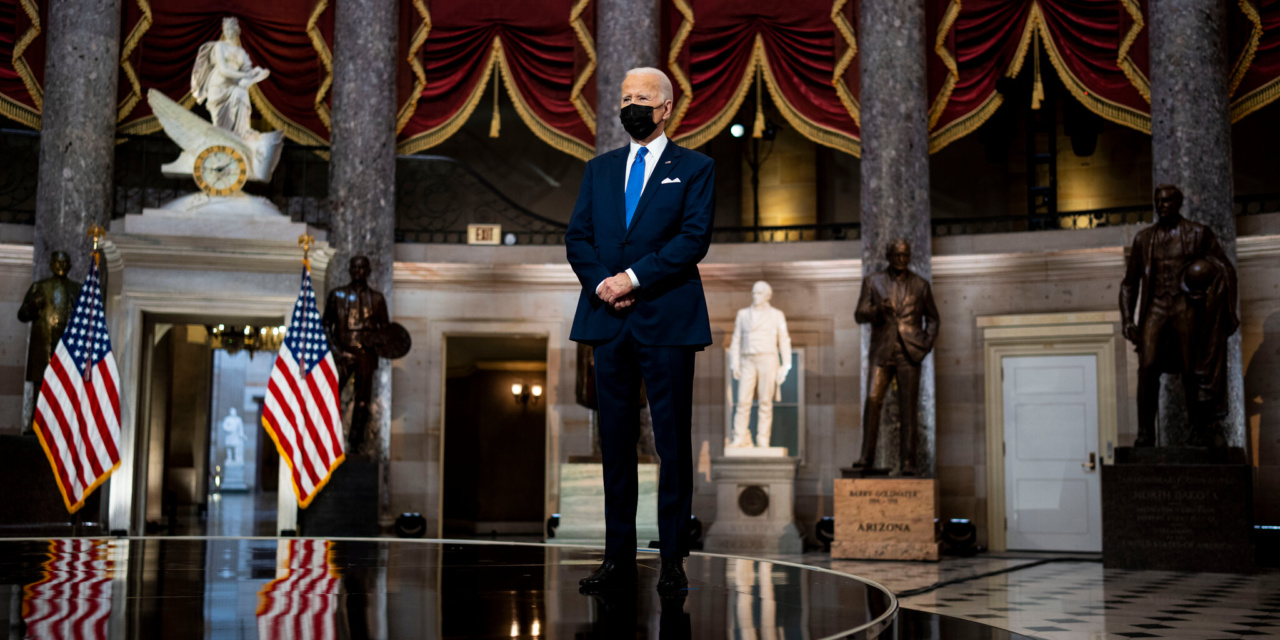 Marking the first anniversary of the Trumpist attack on the US Capitol, President Joe Biden and Vice President Kamala Harris have called for a revival of the “American spirit” while calling out Donald Trump’s incitement of the assault.

At a solemn ceremony at the Capitol on Thursday morning, Harris opened with a reflection on the invasion by hundreds of Trump supporters, just after Trump had spoken at a rally outside the white House

What the extremists who roamed these halls targeted was not only the lives of elected leaders. What they sought to degrade and destroy was not only a building, hallowed as it is. What they were assaulting were the institutions, the values, the ideals that generations of Americans have marched, picketed and shed blood to establish and defend.

On January 6th, we all saw what our nation would look like if the forces who seek to dismantle our democracy are successful, the lawlessness, the violence, the chaos. What was at stake then and now is the right to have our future decided the way the Constitution prescribes it by we the people, all the people. We cannot let our future be decided by those bent on silencing our voices, overturning our votes, and peddling lies and misinformation by some radical faction that may be newly resurgent, but whose roots run old and deep.

She then invoked the challenge for the US, both generally and over specific issues such as voting rights.

The American spirit is being tested. The answer to whether we will meet that test resides where it always has resided in our country, with you, the people. And the work ahead will not be easy. Here in this very building, a decision will be made about whether we uphold the right to vote and ensure free and fair elections.

Biden on Trump: A “Web of Lies for “His Own Interest”

Using testimony from officers who were attacked on January 6, Biden recreated the threat:

The President then turned to his predecessor’s central role in the attack:

We must be absolutely clear about what is true and what is a lie. And here’s the truth. The former President of the United States of America has created and spread a web of lies about the 2020 election. He’s done so because he values power over principle, because he sees his own interest as more important than his country’s interest than America’s interest. And because his bruised ego matters more to him than our democracy or our Constitution.

Biden noted the ongoing prominence of the Trumpists despite the assault: “While some courageous men and women in the Republican Party are standing against it, trying to uphold the principle of that party, too many others are transforming that party into something else.”

But he then reached out, “I will always seek to work together with them to find shared solutions where it possible. Because if we have a shared belief in democracy, then anything is possible. Anything.”

After further detailing the “big lie” of Trump and his supporters as they tried to overturn the election, Biden issued his call for a renewed American democracy:

For January 6th marks not the end of democracy, but the beginning of a renaissance of liberty and fair play. I did not seek this fight, brought to this capital one year ago today, but I will not shrink from it either. I will stand in this breach. I will defend this nation and I will allow no one to place a dagger to the throat of democracy. We will make sure the will of the people gets heard, that the ballot prevails, not violence. That authority in this nation will always be peacefully transferred.

Where Are the Republicans?

The scale of the task ahead was highlighted by the absence of Republicans from the anniversary ceremonies. Only one of the 262 GOP legislators attended: Rep. Liz Cheney of Wyoming, accompanied by her father, former Vice President Dick Cheney.

The only Republican event was hosted by diehard Trumpist Rep. Matt Gaetz of Florida and QAnon supporter Rep. Marjorie Taylor Greene of Georgia, who has been reprimanded and removed from House committees for her falsehoods. They used the gathering to repeat their conspiracy theories denying the reality of the Capitol Attack, and later appeared on the podcast of former Trump chief strategist Steve Bannon to declare “a fedsurrection not an insurrection”.

Liz Cheney told reporters, “I think it’s a reflection of where our party is.”

Senate Minority Leader Mitch McConnell of Kentucky issued a statement about January 6 as “a dark day for Congress and our country”. However, continuing to block voting rights legislation, he declared that Democrats were seeking to “exploit this anniversary to advance partisan policy goals that long predated this event”.

Rep. Steve Scalise, the second-ranking Republican in the House, insisted that Democrats had turned the anniversary into “a politicized day….They want every day to be about January 6.” Sen. Lindsey Graham, a close friend of Trump, proclaimed, “Their brazen attempts to use January 6 to support radical election reform and changing the rules of the Senate to accomplish this goal will not succeed,”

Rep. Tom Rice of South Carolina was among the few Republicans who focused on “the day we nearly lost the country our founders fought for:

Any reasonable person could have seen the potential for violence that day. Yet, our president did nothing to protect our country and stop the violence. The actions of the President on January 6 were nothing short of reprehensible.

On Fox TV, Tucker Carlson — a friend and informal advisor of Trump — told his viewers, “January 6 barely rates as a footnote. Really not a lot happened that day if you think about it.”

Ted Cruz grovels apologetically to Tucker Carlson for his "sloppy" comments about January 6 being a "terrorist attack" pic.twitter.com/ZBPgLLBWIL