After 6 Days, Kurdish-Led SDF Retakes Control of Prison from ISIS in NE Syria 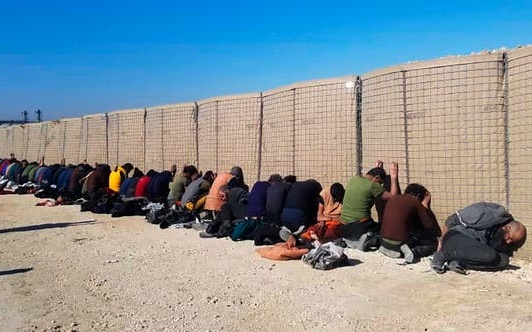 After six days of fighting, the Kurdish-led Syrian Democratic Forces have regained control of a prison in northeast Syria from the Islamic State.

SDF spokesman Aram Hanna said ISIS fighters had finally given up after holing up in part of the Gweiran complex: “The future was clear to them if they didn’t surrender. The area was completely besieged and completely under the control of our forces. They had no other option.”

Kurdish officials said they were still trying to determine casualties. An SDF spokesman has said that at least 30 SDF troops and more than 100 ISIS fighters were slain.

It is unknown if any of an estimated 850 juveniles in detention were killed.

Hanna did not say how many escaped ISIS detainees remained at large, or how many SDF troops were still held captive by the faction.

As fighting between the Islamic State and the Kurdish-led Syrian Democratic Forces continues, UN officials say about 45,000 people have been forced from their homes near the Gweiran Prison in Hasakah Province in northeast Syria.

The UN children’s agency UNICEF said late Sunday that the evacuation of almost 850 juveniles in the prison is essential as they are at “immediate risk”.

The SDF claimed that they retook part of the prison on Monday, with the surrender of at least 300 ISIS fighters. They said other fighters are in other buildings in the complex.

Kurdish officials said at least 180 detainees and ISIS fighters and 27 SDF personnel have been killed since the initial Islamic State attack last Thursday.

ISIS has not mentioned any casualties among its fighters, while claiming the killing, injuring, and capture of SDF troops.

Clashes between the Islamic State and the Kurdish-led Syrian Democratic Forces continue, more than 60 hours after ISIS attacked Gweiran Prison in northeast Syria and freed hundreds of its members.

Clashes between ISIS and PKK militants are continuing in its 3rd day with all intensity after ISIS had launched an attack on the Sana prison in the city of Hasaka, located in the east of #Syria and under the control of the #US-backed SDF (PKK) militants. pic.twitter.com/NtcVL2uqiy

The Islamic State released a video claiming to be of scores of captured SDF troops. Many appeared to be beaten.

The SDF acknowledged that 17 of its soldiers had been slain.

The Pentagon acknowledged US airstrikes to help the Kurdish forces regain control of the prison and the nearby neighborhoods. Arab tribal figures said American troops had taken up positions.

Arab tribes and relatives claim that many detainees are held because they resisted forced conscription, with juveniles among those imprisoned. The SDF denies the accuastion.

Human Rights Watch says about 12,000 men and juveniles suspected of Islamic State affiliation, including 2,000 to 4,000 foreigners from almost 50 countries, are being held by the SDF in overcrowded and inhumane conditions.