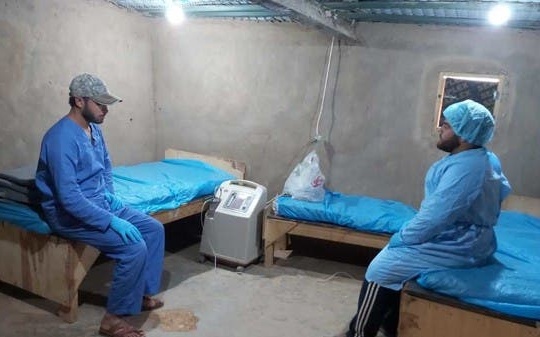 Sources inside Rubkan camp confirm that oxygen tanks have finally been delivered to assist residents with serious cases of Coronavirus.

The camp’s resident organized efforts for the much-needed supply, contacting humanitarian activists to pursue arrangements amid the long-running shortages of medical equipment and basic care.

Humanitarian activists and residents have confirmed the first death from Coronavirus in the Rukban camp, in southeast Syria near the Jordanian border.

The victim is a man who was taken to the al-Wahat checkpoint after he could not get necessary treatment in Rukban because of a lack of essential medical supplies.

Three families left Rukban earlier this week because of the situation in the camp. However, sources says one male member of the families is still being held and questioned by regime officials.

The two critically-ill patients in the Rukban camp are improving and are no longer receiving oxygen.

The three families who have departed the camp have been transferees to Homs. One of the returnees is being questioned by the regime’s security personnel.

Humanitarian activists and camp residents report two more critical cases of Coronavirus among the 12,000 people in the barren area of Rukban in southeast Syria.

The patients are receiving oxygen. It is unclear if the emergency supply was provided by the US military base at Tanf, northeast of Rukban on the Iraq border.

Besieged by Russia and the Assad regime, residents have been pleading for American assistance amid the potential of thousands of Coronavirus cases.

The Assad regime has been hoping that the pandemic will bolster their years-long campaign to force resident back to their home areas. However, only three families — all from the Homs area in central Syria — chose transfer this week.

Humanitarian workers said two residents tested positive after they were taken to the US military base at Tanf on the Iraq border. One died and the other was returned to Rukban.

There are about 12,000 people in the barren area of Rukban, near the Jordan border — 8,000 in the camp and 4,000 nearby. Residents say about half of the adults — an estimated 3,000 men and women — are showing symptoms such as persistent cough, headache, diarrhea, and fever. However, there are no tests for confirmation. The camp has no vaccinations, few masks, no hand sanitizers, and no drugs except paracetamol.

Staff at the camp’s rudimentary clinic have just have enough masks for themselves. They are advising patients to consult via phone, with the instruction to avoid coming to the medical point in person.

The US-supported, anti-Assad faction Maghawir al-Thawra, which provides security for the camp, has issued a series of measures to try and limit the virus. They include closure of schools until January 2, cancellation of all gatherings, no congregation in markets and shops, and social distancing.

Anyone who has symptoms “should stay at home until their condition is confirmed, even if the symptoms are not serious”.

Siege and A Medical Crisis

Rukban has been besieged by Russia and the Assad regime since autumn 2018, with the main route cut off and only three UN aid convoys allowed since then. The Jordan border was closed in 2016 after an Islamic State suicide bombing, and the US military at Tanf has refused to provide assistance.

As a result, the camp has only a rudimentary clinic and few medicines, let alone the protective equipment and ventilators needed for a Coronavirus outbreak. Food and essential supplies, including winter-ready shelter, are in short supply. Disease is exacerbated by lack of adequate water and sanitation.

The displaced fled to Rukban in 2015 from Homs Province in central Syria amid an Islamic State advance. The camp once held about 75,000 civilians, but Russia and the regime have used the siege and the threat of starvation and medical crisis to forcibly transfer many people back to Homs. The remainder have persisted, fearing detention, interrogation, and even “disappearance” if they return.

Humanitarian activists have struggled to get even emergency cases to either Jordan or the Tanf base for treatment. In one instance, a woman was able to get an urgent Caesarean section, but another and her newborn son died in the camp.