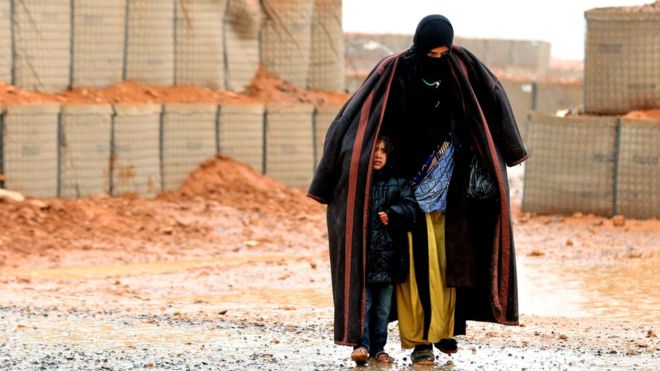 The manager of the Sham medical point has responded to questions about the death of Sahar al-Muhammad.

He said al-Muhammad was in good condition when she was checked on Tuesday night, but was suffering from cold limbs, pallor, and difficulties with breathing when she came back at 5 am on Wednesday. She worsened at 9 am, and passed away at 1:15 pm.

Her son, al-Muhammad’s first child, was delivered by Ceasarean section after al-Muhammad’s death, but soon died because of a lack of life-support equipment for newborns.

The manager said the clinic contacted the Syrian Arab Red Crescent but no one answered the phone.

A pregnant woman has died during childbirth in Syria’s Rukban camp, near the border with Jordan.

Sahar al-Muhammad perished on Wednesday after Jordan authorities refused to allow an ambulance into the camp despite a distress call. She died from a heart attack after internal bleeding could not be stemmed.

Her son soon died because of severe bleeding and dislocation of the placenta.

Pro-opposition sites claimed the Jordanian authorities cited a shortage of staff because of the Eid al-Fitr holiday at the end of the holy month of Ramadan. The Syrian Arab Red Crescent also did not answer the pleas for assistance.

Video was posted of al-Muhammad’s struggle as other residents waited for the aid that never came.

Pregnant women in the camp have spoken of their dilemma with the lack of adequate facilities and prohibitive cost of medicine. A 19-year-old summarized, “This is my first child. A woman’s first birth is difficult, and I’m scared that something bad might happen. There are no doctors here.”

But if they leave Rukban, the women worry about their futures and that of their children. One summarizes, “I’m scared of getting arrested. What will happen to me?”

Trapped Between A Siege and Fears of Returning Home

About 30,000 displaced Syrians are still in the besieged camp. They have endured shortages of food, medicine, and basic supplies after Assad regime forces cut routes last autumn. The situation has been compounded by Jordan’s closure of the border since an Islamic State suicide attack in June 2016.

Under pressure from the regime and Russia, several thousand residents have returned to home areas, which they fled in 2015 amid ISIS attacks. But others remain despite the hardship, fearing detention, forced conscription, and harassment if they go back to regime territory.

Several men have reportedly been killed by regime personnel in centers in Homs Province after leaving Rukban. Others have disappeared amid interrogation.