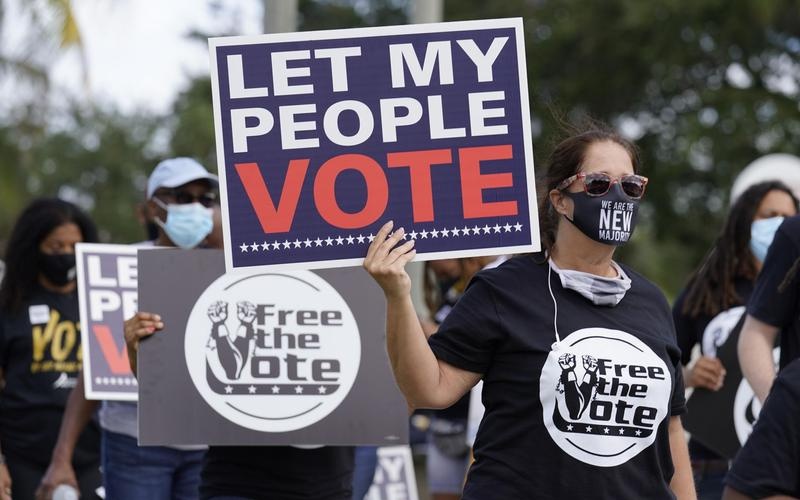 The John Lewis Voting Rights Advancement Act was supported 51-49, but was short of the 60 votes needed to bypass the Republican filibuster. The only GOP senator to join all 50 Democrats was Lisa Murkowski of Alaska.

Senate Democrats said they will now step up discussions about altering the filibuster, used by the Senate Minority Leader Mitch McConnell of Kentucky to blockade all legislation except that which can be advanced through “budget reconciliation”.

“Just because Republicans will not join us doesn’t mean Democrats will stop fighting,” said Senate Majority Leader Chuck Schumer of New York. “We will continue to fight for voting rights and find an alternative path forward.”

The John Lewis Act, named after the civil rights leader and long-time Representative who died last year, would again require jurisdictions with a history of discrimination to win prior approval from the Justice Department or federal courts before changing their voting rules.

The Supreme Court invalidated the requirement in a 2013 decision, and it further weakened safeguards against discriminatory election practices in a ruling this year.

With the Court weakening the Voting Rights Act, Republican legislatures across the US have passed measures restricting ballots.

“We wouldn’t be dealing with some of these terrible, draconian measures in Georgia right now if preclearance were on the books,” said Sen. Raphael Warnock, who won a special election in the state in January. “And so, let’s get this done.”

ORIGINAL ENTRY, OCT 21: For the third time this year, Senate Republicans block the Freedom to Vote Act for voting rights.

All 50 Democrats voted on Wednesday to bring the Act to the floor, but all 50 Republicans voted No to maintain their blockade.

To circumvent a GOP filibuster, the Democrats needed 60 votes.

These laws will make it harder for millions of Americans to participate in their government. If there is anything worthy of the Senate’s attention, if there’s any issue that merits debate on this floor, it is protecting our democracy from the forces that are trying to unravel it from the inside out.

But Senate Minority Leader Mitch McConnell of Kentucky maintained his obstruction, “As long as Senate Democrats remain fixated on their radical agenda, this body will continue to do the job the framers assigned it and stop terrible ideas in their tracks.”

The bill is a compromise version, agreed with Democratic Sen. Joe Manchin of West Virginia, who opposed the original For The People Act passed by the House in August. It sets federal standards for early and mail-in voting and makes Election Day a national holiday. Voters must provide some form of identification before casting a ballot.

Leading Democrats said they will now try to persuade Manchin and other senators to restrict the filibuster, used by McConnell to block consideration of any measure unless it falls under “budget reconciliation”.

See also EA on Monocle 24 and ANews: The Battle Over Voting Rights in the US