Biden on Voting Rights Restrictions: “Have You No Shame?” 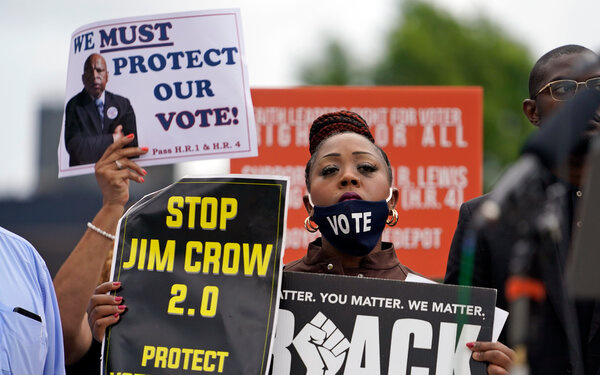 President Joe Biden calls out Republicans restricting voting rights and backing the disinformation of Donald Trump over the November 2020 election.

Biden said in Philadelphia on Tuesday that the restrictions are the “most significant test of our democracy since the Civil War” amid Trump’s “big lie”.

He appealed to Republicans “in Congress and states and cities and counties to stand up, for God’s sake”:

Help prevent this concerted effort to undermine our election and the sacred right to vote. Have you no shame?…

The President promoted the legislation, the For The People Act and John Lewis Voting Rights Advancement Act, which has been blocked by Republicans in the US Senate.

He noted a Supreme Court decision earlier this month weakened the last enforcement clause in the 1965 Voting Rights Act, after the justices struck down its core provision in 2013: “The court’s decision, as harmful as it is, does not limit the Congress’s ability to repair the damage done. As soon as Congress passes the For the People Act and the John Lewis Voting Rights Advancement Act, I will sign it and want the whole world to see it.”

But Biden acknowledged that the GOP’s use of the filibuster, preventing any final consideration of the legislation, was likely to hold both bills up during the two-year Congressional session. He turned to the hope of victories in the 2022 Senate and House elections to change the balance at the US Capitol, even with Republican-controlled State legislatures trying to tilt the ballots through the restrictions.

We’re going to face another test in 2022. A new wave of unprecedented voter suppression, and raw and sustained election subversion. We have to prepare now….

[We must] educate voters about the changing laws, register them to vote and then get the vote out.

Despite many Democratic legislators pressing for an end to the filibuster, Biden avoided taking a position on the issue in answers to reporters.

Instead, he said in his speech that the Justice Department will try to dismantle “racially discriminatory laws like [its] recent challenges to Georgia’s vicious anti-voting law“.

The Department’s Voting Rights Division will be doubled to try and prevent voter suppression, both in the courts and in elections.

Earlier on Tuesday, in a vivid display of the challenge, Texas Democrats held a press conference in Washington to highlight the Republican effort to ram through restrictions in their state, and to back the effort for national legislation.

The Democrats left the Texas capital Austin to prevent a quorum for the State Senate to complete the passage of a restrictive bill, demanded by Trump-supporting Gov. Greg Abbott.

The Texas legislation — similar to bills already passed in states like Florida and Georgia — bans 24-hour voting and drive-through voting; prohibits election officials from sending absentee ballot applications to voters who have not requested them; adds new voter identification requirements for mail-in voting; limits assistance to voters; and expands the authority of partisan poll watchers.

We can’t listen to more speeches. I’m incredibly proud not only as a Democrat but also an American of what President Biden has accomplished in his first few months in office.

But protecting our democracy should have been at the very top of the list, because without it none of these issues matter.