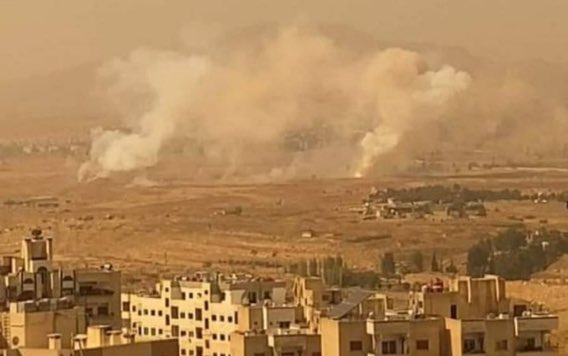 Claimed image of an Israeli missile strike on a base near Damascus, Syria, October 30, 2021

The Assad regime’s military added that six soldiers and a civilian were injured early Wednesday morning. It acknowledged damage to several structures while issuing its standard, unsupported claims that missiles were downed.

The Russian military said the strike was carried out by six Israeli F-16 jet fighters who fired 12 guided missiles from Lebanese airspace.

In their third airstrikes on Assad regime territory in nine days, Israel’s warplanes have struck sites near Homs and Tartous in western Syria.

Assad’s military said the attack was in the early evening on Monday. Among the targets was Shayrat airbase near Homs, from which the regime has launched conventional and chemical attacks.

The attacks were Israel’s sixth within the past month.

A military official told SANA news agency that surface-to-surface missiles, fired from northern Israel, struck the Zakia region outside the Syrian capital and caused “material damage” just before 3 a.m. He did not give any information on targets or casualties.

The second set of Israeli strikes in six days on pro-Assad targets has killed at least two troops near Damascus.

Israeli missiles fell on bases on Saturday in a rare daytime raid.

The regime’s military issued its template statement that most of the missiles were intercepted and destroyed, but acknowledged the casualties and damage.

Israel has regularly targeted bases with Iranian personnel in the Damascus suburbs, seeking to hinder transfer of weapons to the Lebanese organization Hezbollah.

Both Iran and Hezbollah have been essential in propping up Bashar al-Assad and his military since the Syrian uprising began in March 2011.

Warplanes fired missiles on positions near the town of al-Baath, close to the Israeli-occupied Golan Heights. Two large missile depots were said to have been hit.

There is no news yet on casualties. As usual, the Israel Defense Forces refused comment.

Israel has carried out hundreds of airstrikes inside Syria since the country’s uprising began in March 2011. Israeli Governments under Benjamin Netanyahu and, since June, Naftali Bennett have targeted Iranian weapons transfers to Lebanese ally Hezbollah, pressed for Iran’s military withdrawal after Tehran propped up the Assad regime, and sought to prevent Tehran and Hezbollah establishing a military presence near the Golan.

Last week Israel allegedly assassinated a senior Assad regime intelligence office, Midhat as-Saleh, on the Syrian side of the Golan.