From Sleaze to Brexit: The UK Government’s Culture of Impunity 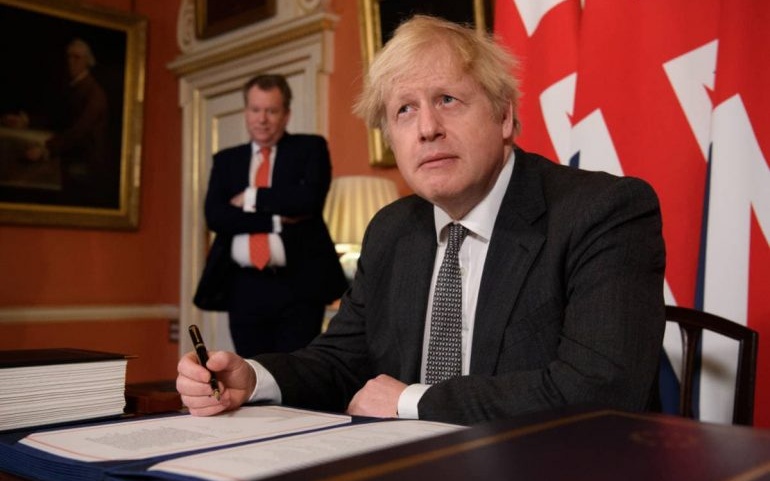 So the UK’s Johnson Government has fouled itself with another scandal of possible corruption and confirmed abuse of power.

Conservative MP Owen Paterson, a former MP, was reprimanded on October 26, 2021 by the Parliamentary Standards Committee over undeclared consultancies amounting to almost three times his £82,000 annual salary. One of the companies who paid the MP, Randox, was awarded a new £347m Coronavirus testing contract, even thought its kits were recalled over the summer because of concerns about contamination.

The Committee summarized, “No previous case of paid advocacy has seen so many breaches or such a clear pattern of behaviour in failing to separate private and public interests.”

Business Secretary Kwasi Kwarteng pressed the independent Commissioner, Kathryn Stone, to resign: “I think it’s difficult to see what the future of the commissioner is, given the fact that we’re reviewing the process, and we’re overturning and trying to reform this whole process.”

The Government ultimately failed. The motion over the committee’s future passed 248 to 221 on November 3, but even Tory MPs who followed the whip to vote Yes were uneasy. Criticism, including from tabloids normally promoting the Conservatives, was rampant.

The day after the House of Commons vote, Prime Minister Boris Johnson U-turned. There would be no alterations to the system. Rather than enduring his suspension, Paterson resigned as an MP.

But what connects Paterson and sleaze with Brexit?

A culture of impunity: “exemption from punishment or freedom from the injurious consequences of an action”.

Johnson has been the subject of multiple investigations, by the Parliamentary Standards Committee and by the London Assembly, over his conduct as Mayor of London and as Prime Minister. The Leader of the House of Commons, Jacob Rees-Mogg, failed to declare £6 million in cheap personal loans from one of his companies. The Government is trying to stave off a Coronavirus inquiry which, beyond Paterson and Randox, could explore Ministers’ links to other companies awarded lucrative contracts without tender.

It is the same Government which unlawfully tried to prorogue Parliament to avoid scrutiny of its Brexit withdrawal agreement, which sought to violate international law with a unilateral change to that agreement, and which even now is threatening a suspension of the Northern Ireland Protocol to break the agreement.

The silver lining of the Paterson affair for Johnson and his cronies has been the diversion of attention from Brexit throughout November.

Trade and supply issues, including in Great Britain’s supermarkets, continue. Annual inflation set another record for the past decade, reaching 4.2% in October after September’s mark of 3.1%. And the Government continued to bluster and stall over the Northern Ireland Protocol.

In October, after months of the UK Government’s barracking of a Protocol to which it had signed up, the European Union proposed a reduction of customs paperwork by 50% between Northern Ireland and Great Britain. Checks on food would be cut by 80%.

The Johnson Government’s response was to dismiss the proposal, despite the benefits of restored trade flows across the Irish Sea, by moving the goalposts. The hardline negotiator David Frost said the European Court of Justice would have to be removed from arbitration, an unacceptable condition for the EU.

Frost again threatened invocation of Article 16 of the Protocol, an effective British withdrawal reviving the prospect of a “hard border” between Northern Ireland and the Republic of Ireland as well as European Union tariffs.

Last week, Frost said there had been progress in talks with European Union counterpart Maroš Šefčovič, after Housing Minister Michael Gove — who was replaced by Frost as chief negotiator and by the tougher UK line in March — welcomed the European Commission’s “constructive approach”.

But Frost then implicitly brushed away Gove, telling the House of Lords that the Government has not shifted its position from July’s Command Paper with Article 16 on the table. He restated his demand excising the European Court of Justice from the process and threatened fast-track legislation to replace EU measures.

Šefčovič said there had been some movement over supplies of medicines from Great Britain to Northern Ireland, but he called out Frost for covering up the UK Government’s continued stonewall on broader issues.

Referring to Frost’s rhetoric of “more urgency” in the talks, the European Commission vice-president said on Sunday, “Sometimes I have the feeling that in our meetings I’m the only one who pushes for urgent solutions”. Even on medicines, Frost was dragging his heels over a resolution.

I was waiting [to see] if we can deliver on that solution jointly. And I have to say that [as of] today this is not the case.

I don’t think that it will solve the most pressing issue for the people of Northern Ireland and therefore we might be acting alone to make sure that the Northern Ireland people have the medicines they need.

Meanwhile, Frost was replacing dialogue with another blast in the UK’s right-wing tabloids. Writing for The Mail of Sunday, he effectively denounced Brexit’s arrangement keeping Northern Ireland in the European single market with the customs line down the Irish Sea.

Goods which both we and the EU agree aren’t going to leave Northern Ireland should not be treated as if they were moving from one country to another – because they are not.

But at the moment the EU says it is impossible. I urge them to think again.

He highlighted the consequences of the Government’s approach while trying to shift the blame to the EU: 200 retailers have stopped delivering to Northern Ireland and Marks & Spencer has withdrawn its entire click-and-collect range for Christmas “because of the uncertainties in delivery timetables”.

The Limits of Impunity

But as with the Paterson affair, the Johnson Government may have reached the limit of impunity with Brexit.

Before his latest talks with the EU’s Šefčovič and pose in the House of Lords, Frost met political and business leaders in Northern Ireland. He was met with opinion polls showing a rise in support for the Protocol. While the Democratic Unionist Party — trying to rebuild a shaky political position — is backing the Government’s hard line, a majority of parties in the Northern Ireland Assembly support the arrangement.

Perhaps most importantly, Northern Ireland’s businesses are profiting from their “best of both worlds” trade and investment position. The region’s exports to Ireland have soared 60% this year, compared with a 32% drop in Great Britain’s exports to the Republic.

In a marker of the optimism, Ardagh Packaging, one of the world’s largest packaging companies, announced plans to build a $200 million beverage can plant near Belfast to export both to British and EU markets. About 170 jobs will be created.

Days earlier, the Northern Irish pharmaceuticals group Almac announced it is creating 1,000 jobs over the next three years as part of a global expansion. It hailed the Brexit arrangements offering “unique, unfettered, and flexible access to the UK, Europe, and beyond”.

Stephen Kelly, chief executive of Manufacturing NI, summarized, “Our exporters are having the time of their lives at the moment.”

The Johnson Government’s impunity would undo the uplift in the only part of the UK to see a Brexit boost. Kelly explained:

[Businesses are] concerned the uncertainty created around triggering Article 16 would be viewed as real jeopardy. The minute it’s done, Northern Ireland will be viewed as legally challenging and boardrooms and customer orders will begin to be impacted that very same day, that’s just the reality of it.”

A business leader, who asked to remain anonymous, added, “Triggering Article 16 would create another uncertainty lasting another 12 months if not longer, just as we’re entering the Christmas period.”

Already facing Scotland’s independence movement, would the UK Government risk punishment and alienation of Northern Ireland? Gove’s statement indicated a recognition of the political and economic reality — only to be doused within hours by Frost’s posturing.

So a Johnson Government which won the December 2019 election with “Get Brexit Done” may still have enough impunity to pursue Get Brexit Undone.

But as Šefčovič noted on Sunday, “We cannot undo Brexit.”