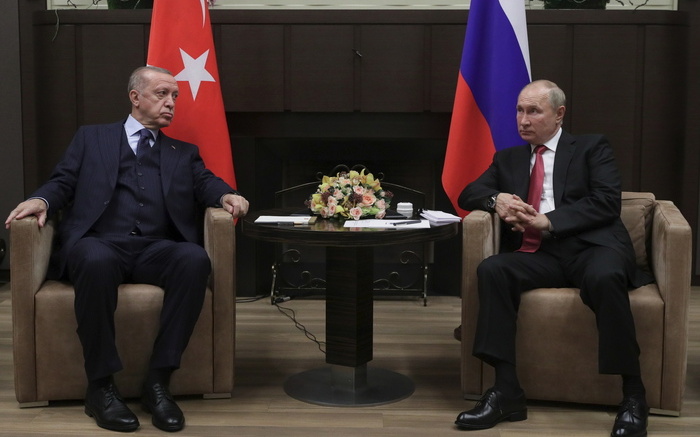 The Assad regime is unhappy with last Wednesday’s summit between Russian President Vladimir Putin and Turkish counterpart Recep Tayyip Erdoğan, particularly with a lack of apparent support for its desire to overrun opposition-held northwest Syria.

The discontent is expressed through Al Watan, linked to the regime. The site posts a lengthy article on Sunday complaining that the “road map” for Idlib Province — the ceasefire agreement between Putin and Erdoğan is “unclear” with “no complete agreement on its line”.

Citing “sources”, Al Watan suggest that “differences” in the summit are evident with Russian airstrikes on opposition territory, and the “terrorists” of Erdoğan — Turkish-supported anti-Assad factions — firing on regime forces. The sources express frustration over fortifications along the M4 and M5 highways to prevent a regime advance.

Al Watan recycles the regime’s periodic disinformation that “terrorists” are planning a chemical attack, seeking to blame the use of “missiles with toxic warheads” on the regime’s military.

ORIGNAL ENTRY, SEPT 29: Russian President Vladimir Putin and Turkish counterpart Recep Tayyip Erdoğan have offered no answers from their Wednesday summit about Syria, including the future of the opposition-held northwest.

The two leaders met in the resort city of Sochi in southern Russia. The encounter came against the backdrop of escalating attacks by Russia and the Assad regime on Idlib Province in the northwest, breaking a March 2020 ceasefire announced by Putin and Erdoğan in their last face-to-face meeting.

Bashar al-Assad has insisted that he will regain “every inch” of Syria. Before the March 2020 announcement, an 11-month Russia-regime offensive seized all of northern Homs Province and part of neighboring Idlib.

In the past week, both sides postured for the summit. Russia bombed the positions of Turkish-backed, anti-Assad factions across northern Syria. Turkey said it moved thousands of troops, including air defense units, south of the vital east-west M4 highway in Idlib.

Putin and Erdoğan gave no clues to their discussion yesterday, saying only that it was “useful” and “productive”.

Erdoğan’s official summary said only, “Our joint steps regarding Syria are of great importance. Peace over there depends on Turkey-Russia relations.”

The two men did not speak to reporters.

Russian and Turkish media featured Putin’s post-meeting message to Erdoğan, “We will be in touch.”

Amid the lack of substance on Syria, leading US outlets like The New York Times ignored the topic. Instead, they referred to discussions of “weapons deals, trade and a nuclear reactor Russia is building in Turkey”, and fretted, “Amid Tensions With U.S., Erdoğan Praises Ties With Russia”.

The Kremlin also preferred attention to its role in Turkey’s nuclear program. Spokesman Dmitry Peskov said, “A new, advanced, high-tech economic sector is being created in Turkey, clean in terms of all green transitions. Russia, of course, helps Turkey with this and intends to further expand cooperation.”