UPDATE: 1st US Talks With Taliban Since Afghanistan Withdrawal 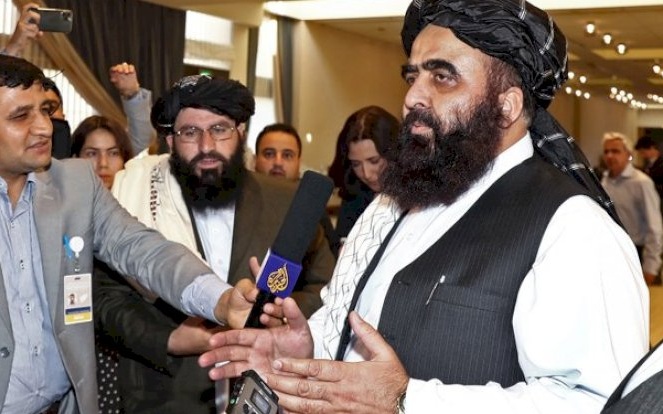 Acting Foreign Minister Amir Khan Muttaqi is leading the Taliban delegation in talks with US officials in Doha, Qatar this weekend (File/AFP)

At the conclusion of two days of talks with the Taliban in Doha, Qatar, US officials have spoken of “candid and professional” discussions.

The Americans gave no details of any agreements, but Taliban representatives said the US committed in the “positive” encounter to some humanitarian aid for the country.

The discussions were candid and professional with the US delegation reiterating that the Taliban will be judged on its actions, not only its words.

The US delegation focused on security and terrorism concerns and safe passage for US citizens, other foreign nationals and our Afghan partners, as well as on human rights, including the meaningful participation of women and girls in all aspects of Afghan society.

ORIGINAL ENTRY, OCT 10: US officials have met Taliban representatives for the first time since the Islamist group took control of Afghanistan in August.

The talks are expected to last two days, with the American priority on “terrorism”, including attacks by the Islamic State Khorasan. The agenda includes safe passage out of Afghanistan for American and other foreign nationals and at-risk Afghans; the US call for the Taliban to form an inclusive government and respect the rights of women and minorities; and humanitarian issues.

See also 1st-Hand from Afghanistan: A Family Flees Kabul
EA on ANews: Why US “War on Terror” Kills Afghanistan’s Civilians

A “senior Administration official” emphasized in a conference call with reporters:

This meeting is a continuation of the pragmatic engagements with the Taliban that we’ve had ongoing on matters of vital national interest.

This meeting is not about granting recognition or conferring legitimacy. We remain clear that any legitimacy must be earned through the Taliban’s own actions.

The Taliban’s Muttaqi said discussions “hihlighted that Afghanistan should be assisted” in a vaccination campaign against Coronavirus. The State Department would not comment on reports that the US has agreed to send vaccine doses to the country.

Muttaqi added, “A number of political issues came up for discussion. We have made it clear to them that destabilizing Afghanistan and weakening of the Afghan government is in the interest of no one.”

Taliban spokesman Suhail Shaheen said on Saturday that the group has no interest in working with the US against “terrorism”: “We are able to tackle Daesh [ISIS-K] independently.”

The Biden Administration has frozen almost $10 billion in Afghan government assets held by the Federal Reserve. Both the World Bank and the International Monetary Fund, reportedly under US pressure, have suspended aid and lending programs.

See also Zarlasht Wali Is Still Determined to Educate Afghanistan’s Girls
More Than The Taliban: The Factions in Afghanistan’s Battle for Power