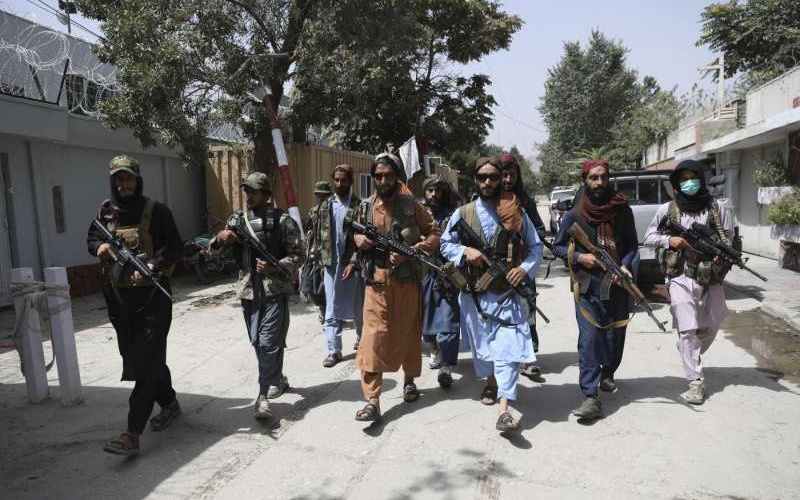 “Three men were lined up and shot right in front of the kids from the orphanage.”

This is what “Rias Ahmed” witnessed on the day the Taliban took over Afghanistan’s capital Kabul.

August 15 was a Sunday morning that started as usual, even with the concern about the Taliban’s advance. Ahmed, an official in a Government ministry, was gearing up for a meeting.

“We were watching the news about the Taliban militia waiting at the city limits. None of us could have guessed at breakfast that Kabul would fall before lunch,” he recalled.

Just after 2 pm, a group of frantic government staff ran towards him screaming that the Taliban had taken over Kabul: “We’ll be killed, move quickly.”

In the rush that ensued, memories of past violence flashed through Ahmed’s mind. He raced down the stairs, leaving his possessions in his desk.

My driver refused to take me anywhere, fearing we’d all be dead if they saw us in a government vehicle. There was heavy traffic anyway, and I had to walk back home for an hour. What I saw in front of the orphanage was enough for me to decide to leave.

Although I was a child when the Taliban last came to power, I still remember the violence and the brutality to which I lost my father, and I was always on the alert about how to react if they came back.

In the 1990s, Ahmed lost his father, friends, and acquaintances in Taliban revenge killings. Passing the Presidential Palace 25 years later on his route home, he recalled brutal images. In September 1996, the bodies of former President Mohammed Najibullah and his brother, Shahpur Ahmadzai, tortured and killed by the Taliban, were strung up from a traffic-control pole just outside the palace gates.

Now the clock had been turned back, with the fate of government staff, rebels, dissenters, and soldiers was in the hands of the resurgent group.

Standing outside the palace, Ahmed knew he had to discard all his identification cards.

I began walking faster and faster. That’s when I arrived near this orphanage. There were security guards and men dressed as prisoners, trying to flee with the vehicles parked outside. I watched three men get shot, in front of the kids.

We were told that the transition was going to be peaceful, yet here we were, watching people getting killed mercilessly. My colleagues later told me that at least 100 people were killed in the next 36 hours in and around the capital.

Many government officials had already fled to the rural parts of the country or had gone into hiding. Ahmed pondered, “If the Taliban was going for a peaceful transition, why are so many people witnessing violence and death? More and more people are being killed while less and less is being reported in the media.”

A month later, the bone-chilling moment is just as vivid in his mind. Ahmed believes he got lucky and passed through the Taliban checkpoints because he was wearing perahan tunban, traditional Afghan dress.

“I usually wore a suit. But many of us in the ministry wore traditional clothes that day. I would have been on my knees facing death if it wasn’t for the non-Western clothes.”

On the way home, he watched shops being looted and men in prison clothes walking around freely: “It was total mayhem.

Fleeing For A Life

When Ahmed reached home, there was no time to explain to his family where they were fleeing to. “The Taliban blocked the exit from the city and only those who left before dusk could make it out,” he explained.

They packed the bare minimum and immediately went to a relative’s house. “No one in the neighborhood knew which ministry I was working for and what my position was, but I later found out that the Taliban soldiers went to my place during a door-to-door killing spree,” Ahmed said.

The family moved from one spot to another until they found that they were expected at Kabul airport to be evacuated. The tight deadline of August 31 was fast approaching. But each time he switched on his phone, the message was about the Taliban leaving a carnage of dead bodies.

Within two weeks of the city falling, more than 120,000 people were airlifted out of Afghanistan by various countries. The turn of Ahmed’s family arrived, and without packing anything, they set out to leave behind their past life. The only things he carried were his new phone and the clothes he wore.

“I hid my phone under the sole of my shoe and couldn’t even take a bottle of water. We were to pretend that we were just passing the road towards the airport to meet a relative on the other side,” he explained.

Thousands were waiting outside. Ahmed’s family had to pass a Taliban checkpoint to get into the airport. “They didn’t stop us because the crowd was overwhelming and the Taliban fighters couldn’t handle the swell.” Many were not so lucky, and were detained by the fighters.

It took Ahmed and his family more than seven hours just to cross the checkpoint. “Hours went by without water and no knowledge of when we’ll board the plane. We just had to wait. The evacuation representative asked me to wear a pre-decided accessory so the evacuation team would recognise me,” he said.

He was lucky that a European evacuation team had a list of names which included his. The crowd at the airport’s Abbey Gate was so large that a stampede could have killed many.

There were army personnel of many nationalities – Germans, Americans, French, and others – who were dealing with the chaos. I remember one of them saying that the Taliban would not enter the airport until we were all taken to safety. I felt reassured, yet the long journey ahead was filled with fear and a sense of guilt that many were still left behind.

I sat there, and we were getting news about the threats of explosions at the airport. After 24 hours of waiting, we got on the evacuation flight. There were children, men and women of all ages. We were all strangers there, but have now become a family — we share a dreadful past and a common fate as refugees.

When did he finally feel free? He whispers cautiously, “Even when the plane took off, many of us feared the Taliban might shoot it down. We felt a sense of relief when we finally landed in Uzbekistan. The journey was brief, but it was nothing less than an encounter with death, every single minute.”

Those Who Left — and Those Left Behind

Ahmed’s family and the other refugees landed in Germany a day later, finding out that an explosion had struck the Abbey Gate. At least 175 people were killed, including 13 US military personnel and 28 Taliban fighters.

Countless other people at risk never had the chance that Ahmed’s family took. Some have since been killed or taken by the Taliban. Others are still stuck in the country, or risking their lives to find ways out.

The killing of four alleged kidnappers in Herat in western Afghanistan on September 25 has heightened fears. They were shot and their bodies were hung in public squares in broad daylight. Morteza Samadi, a 21-year-old photojournalist, was arrested by the Taliban more than 5hree weeks ago while covering women’s protests in the city. On the evening of September 30, he was released and is resting at home, his brother Mostafa Samadi told local media.

Fears are growing among activists and others at risk who have applied for evacuation and are yet to receive a response. Open Democracy spoke to one of them, who has applied to multiple countries, but failed to receive a response. With the borders now closed, he sent a video to Open Democracy from his hiding place. His house had been set on fire, allegedly by the Taliban.

According to the United Nations, around half a million Afghans are expected to flee the country by the end of the year. This will be added to the 2.2 million refugees who have taken sanctuary in neighboring countries, mainly in Iran and Pakistan.

Analysts have warned that the refugee influx of Afghan refugees could intensify populist backlash, especially in Europe. French President Emmanuel Macron sparked criticism on August 16 when he said the continent must “protect itself from significant waves of illegal migrants”. The German election campaign was riven with comments from top politicians that the “2015 Syrian refugee crisis” should not be repeated. In the US, senators expressed concern about “reports that ineligible individuals, including Afghans with ties to terrorist organisations or serious, violent criminals, were evacuated alongside innocent refugee familie”.

Meanwhile, those left behind are facing increased threats with each passing day. Residents in Kabul tell Open Democracy that drinking water, food supplies, and medical aid will soon become scarce.