UPDATE: Horse-Riding Agents Crack Down on Haitian Migrants in Texas 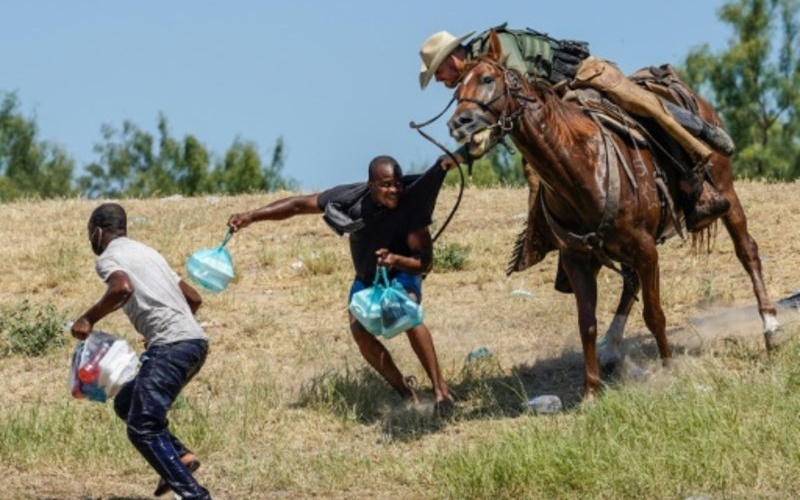 Harris’ chief spokesperson Symone Sanders said in a statement, “The Vice President raised her grave concerns about the mistreatment of Haitian migrants by border patrol agents on horses, and the need of all agents to treat people with dignity, humanely and consistent with our laws and our values.”

Sanders asserted that Mayorkas shared the concern: “[He] also spoke with the Vice President about the efforts DHS has underway to address the humanitarian needs of people at our border in Del Rio through the provision of food, shelter, clothing, and medical care, as well as engagement with non-governmental and international organizations.”

The Vice President told a reporter on Tuesday, “What I saw depicted about those individuals on horseback, treating human beings the way they were, is horrible. And I fully support what is happening right now, which is a thorough investigation into exactly what is going on there.”

UPDATE, SEPT 21: Horse-riding Border Patrol agents have cracked down on almost 15,000 Haitian migrants who moved from Central and South America to Texas.

Videos and photographs showed the agents on Sunday trying to grab the migrants in Del Rio for deportation. One agent shouts, as a girl jumps out of the path of the horse, “This is why your country’s shit, because you use your women for this!”

Initial claims on social media said the agents were cracking whips, drawing parallels with treatment of Black Americans in the 20th century. But examination of the videos confirmed they were swinging the reins of their horses.

Homeland Security Secretary Alejandro Mayorkas traveled Monday to the makeshift migrant camp under a highway overpass. He told reporters that his department would look into the incidents in the videos.

The department said in a statement that Mayorkas has directed its internal oversight office to send personnel to the camp for “full-time” oversight of agents: “We are committed to processing migrants in a safe, orderly, and humane way. We can and must do this in a way that ensures the safety and dignity of migrants.”

Border Patrol head Raul Ortiz said he deployed the horse-riding agents to “find out if we had any individuals in distress, and be able to provide information and intelligence as to what the smuggling organizations were doing in and around the river”.

The Biden Administration has faced a surge in migration since January and a system disrupted and distorted by the Trump Administration’s “zero tolerance” policy, with mass detentions, denial of asylum rights, and separation of children from parents. In late July, US agencies began a “fast-track” approach to deportation of migrants, including families.

The Path to Del Rio…and to Haiti

Believing that they would be accepted by a Biden Administration which has refused to deport Haitians in the US before July 29, the migrants left stable jobs and homes in countries such as Chile, Brazil, and Panama.

Nicodeme Vyles, who had been working in Panama since 2003 as a welder and carpenter, said from the Haitian house of his younger sister:

I thought the United States was a big country, with laws. They treated us terribly. They didn’t even give me an interview with an immigration agent.

What am I going to do? I don’t know this country [Haiti] anymore.

Vyles’ girlfriend and their youngest child were living in Maryland with Temporary Protected Status, given to Haitians displaced by a 2010 earthquake. He took his 9-year-old son out of school and crossed several countries, wading across rivers, and spending time in a Mexican jail before reaching the dusty ditch near the Del Rio International Bridge.

After four days in detention, he was told by a Spanish-speaking agent that he ahd his son would be sent to a less crowded place and then released. But “the next thing I knew, they put us on a plane”.

Thousands of migrants crossed the river from Mexico each day last week. Authorities closed off the main crossing point used by migrants to enter the US and return to Mexico for supplies, worsening food shortages in the camp. An agent said conditions improved significantly Monday as Mayorkas arrived, with the addition of 600 agents and other personnel for staffing and security.

Mayorkas said 6,500 migrants and asylum seekers have been taken into custody. He added that thousands of migrants will be moved to other Border Patrol sectors with capacity to process them.

But two flights of Haitians were sent back to Haiti on Monday, even though some of them have not been in the country for years. The deportations included 128 parents and children who came to the US as part of a group. Some migrants were put in hand and ankle cuffs after protesting

Deportees echoed Vyles’ account of no interview with an immigration agent and of assurances that they were being released or sent to Florida.

Homeland Security spokeswoman Meira Bernstein, did not respond to a question about the claims.

The migrants were deported under an emergency Coronavirus provision, Title 42. A federal judge ordered the Biden Administration last week to stop using the public health order to return family groups, but he stayed implementation until the end of September as the Administration appealed.

Mayorkas said up to three flights per day will carry migrants to the capital Port-au-Prince, amid rising gang violence, the assassination of President Jovenel Moïse in July, and a 7.2-magnitude earthquake last month. He said:

We are very concerned that Haitians who are taking this irregular migration path are receiving false information that the border is open or that temporary protected status is available.

This administration is committed to developing safe, orderly, and humane pathways for migration. But this is not the way to do it.

Of about 11,000 migrants still in the camp, about 8,000 are part of family groups, according to an agent at the site.

Aminadel Glezil sold his house, furnishings, and car in Chile to go north with his wife and two children.