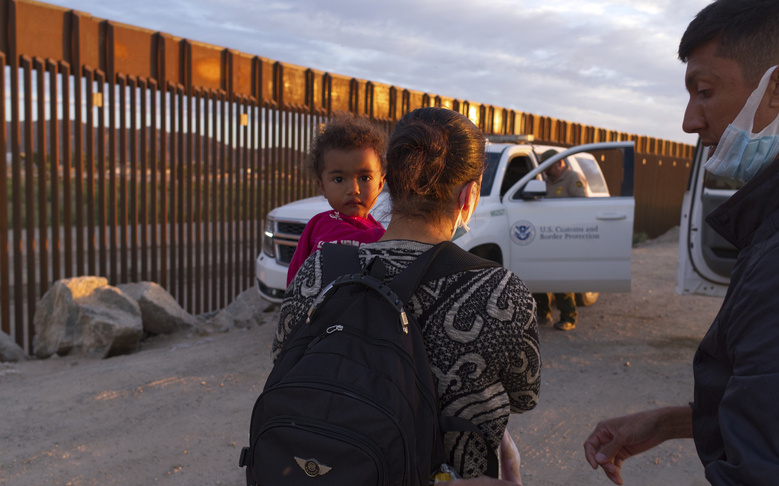 A mother and child from Brazil waits to be processed by US Border Patrol, June 2021 (AP)

The Biden Administration orders the fast-track removal of migrant families whom officials rule do not qualify for asylum after an initial screening.

The Department of Homeland Security said in a statement, “Expedited removal provides a lawful, more accelerated procedure to remove those family units who do not have a basis under U.S. law to be in the United States.”

The Administration has been using a “Title 42″ emergency order, issued by the Centers for Disease Control and Prevention during the Coronavirus pandemic, for the authority to deport to Mexico migrants who cross the southwest US border without a visa.

However, some Mexican border states are refusing to accept families with young children or those who have traveled from countries outside Central America, such as Brazil, Ecuador, India, and Venezuela.

Thousands of families refused re-entry by Mexico have been processed by the US Border Patrol and released to shelters, required to check in with Immigration and Customs Enforcement or to appear in immigration court for a hearing.

Lee Gelernt, a lawyer at the American Civil Liberties Union, responded to Monday’s announcement, “Jamming desperate families through an expedited asylum process would deny them the most basic due process protections and can hardly be called humane.”

Linda Rivas, the executive director of Las Americas Immigrant Advocacy Center, summarized the disappointment, “The announcement we had been hoping for was about an end to Title 42. This administration continues to seek efficiency over safety and due process for migrant families.”

In June, Border Patrol apprehended 188,800 people, the highest monthly number in more than a decade. There have been one million apprehensions since September 30.

The end of the Trump Administration’s “zero tolerance” policy — emphasizing detention, separation of children from families, and denial of asylum — has contributed to a rise in migration since January.

The Administration has dealt with the influx of unaccompanied minors by moving almost all of them from detention to shelters, but faces issues with capacity.

On June 7, Vice President Kamala Harris tolds Central America’s migrants not to seek entry into the US, while pledging assistance to deal with local conditions.

See also EA on Monocle 24: Immigration and Kamala Harris’s Trip to the Border

The Vice President said the US will invest $48 million in entrepreneurship programs, affordable housing, and agricultural businesses, part of a four-year, $4 billion plan for Central America.