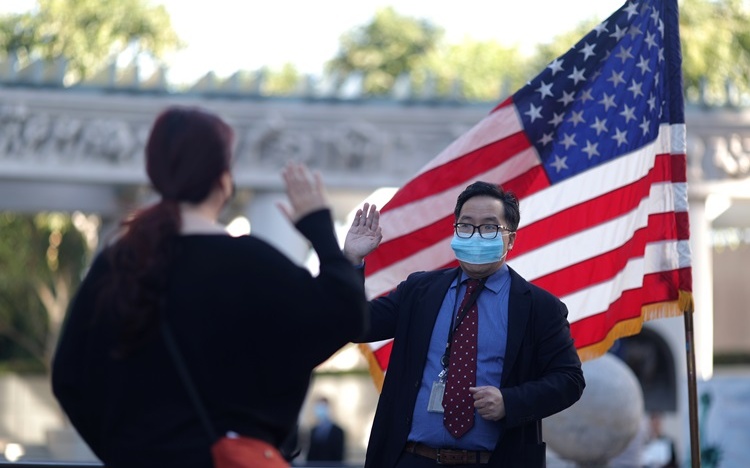 An immigrant takes the oath of US citizenship in an outdoor naturalization ceremony, Los Angeles, California, February 5, 2021 (Lucy Nicholson/Reuters)

President Joe Biden lifts the Trump Administration ban on permanent residency for new immmigrants to the US.

Biden said in a proclamation that the ban did “not advance the interests of the United States”.

Trump imposed the halt on green cards last April, claiming the need to protect US jobs during the Coronavirus pandemic. The ban affected an estimated 660,000 people.

To the contrary, it harms the United States, including by preventing certain family members of United States citizens and lawful permanent residents from joining their families here. It also harms industries in the United States that utilize talent from around the world.

The President said the Administration found that “the unrestricted entry…[is] not detrimental to the interests of the United States”.

Trump and anti-immigration advisors like Stephen Miller used Coronavirus as a pretext to extend their restrictions on punishment. The “zero tolerance” steps had included separating children from undocumented parents, stopping the right to claim asylum in the US, and threatening legal immigrants who receive any public assistance with the removal of green cards — and the possible consequence of deportation.

Another Biden order on Wednesday redressed the challenge to legal immigration, revoking the 2018 order that commanded agency heads to review programs such as food stamps, Medicaid, and housing assistance and imposing new work requirements.

Biden has acted quickly through executive orders to turn back some of the repressive measures. In his first days in office, he protected about 800,000 “Dreamers”, who came to the US as children of undocumented immigrants, from deportation that had been threatened by the Trump Administration. A taskforce will reunify the immigrant families separated at the US-Mexico border, after the Trump seized about 3,000 children from parents and sent them hundreds and even thousands of miles away.

On Monday, the Administration introduced its legislation for immigration reform through the Citizenship Act of 2021, the most significant changes in immigration law in more than 30 years.

The bill includes an eight-year path to citizenship for most of the 11 million undocumented immigrants living in the US as of January 1. Other provisions remove limits on family-based immigration, enabling spouses and children to join families already in the US, and expand worker visas. More resources are provided to process migrants at ports of entry, and there is $4 billion over 4 years for Central American countries, hoping to ease the pressure for migration from economic crisis and lack of security.

In other orders, Biden reversed Trump’s attempt to cut funding from cities labelled as “lawless” and “anarchist jurisdictions”, and he halted the Trump mandate that federal buildings should be designed in a classical aesthetic.