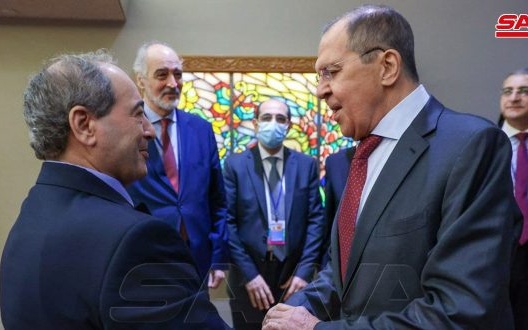 Russian State media paid little if any attention to the encounter, while Syrian State news agency SANA put out an anodyne report that the meeting was on “various aspects related to enhancing the distinguished bilateral relations between the two friendly countries at all political and economic levels which witnessed a new momentum through the recent summit held between Presidents Bashar al-Assad and Vladimir Putin in Moscow”.

See also Assad Visits Putin in Moscow — But Why?

SANA declared that both ministers stressed the need to continue fighting terrorism until it is completely eliminated, ending the illegitimate foreign presence on Syrian territory, and removing unilateral coercive measures imposed on Syria”.

However, Russia has been cautious in the extent that it is enabling Bashar al-Assad’s assertion of retaking “every inch” of Syria.

Moscow’s officials have brokered negotiations, amid Assad regime shelling, which enabled the regime to reoccupy towns and cities in Daraa Province in southern Syria.

Russia has also periodically bombed areas in Idlib and Aleppo Provinces in northwest Syria, breaking a ceasefire declared by Moscow and Ankara in March 2020, as the Assad regime shelled the opposition-held territory. However, Russian officials have balked at allowing a regime offensive to overrun the area with more than 3 million people, many of them displaced from other parts of Syria.