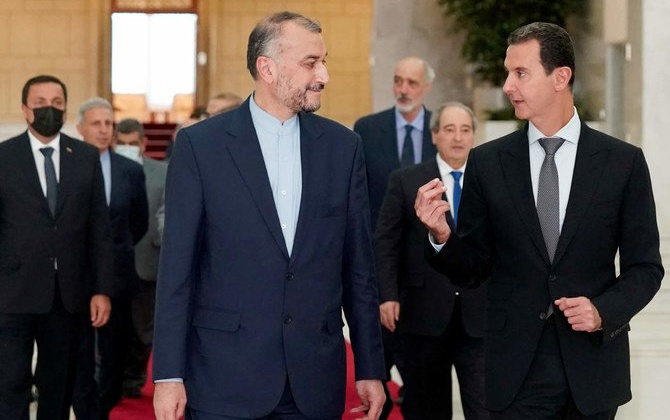 Assad regime media posted platitudes about the meeting such as discussion of “the strategic relations between the two countries” and “steps taken by the two countries to enhance bilateral cooperation with the aim of reaching a higher level of partnerships at various levels, particularly in the economic and trade fields”.

Abdollahian also briefed Assad on the Baghdad conference, where the Foreign Minister tried to snub Saudi Arabia publicly but only caused irritation. Tehran, which had proclaimed its regional influence through the conference, subsequently chided the leading role of French President Emmuanuel Macron and derided the absence of the Assad regime.

Iranian media feature the Foreign Minister’s proclamation, “With the will of the leaders of the two countries, Iran and Syria will take big steps to fight against economic terrorism and to help the two countries’ people.”

ORIGINAL ENTRY, AUG 23: Amid economic crisis in its areas of Syria, the Assad regime has struck a pose with a meeting with Iran’s Ambassador in Damascus.

Earlier this month, as he swore in the new Cabinet, Bashar al-Assad shifted his priority from the post-2011 conflict to “production and finding job opportunities”. He also offered no ideas or programs beyond platitudes.

GDP has fallen by about 70% across Syria since the Syrian uprising began in March 2011. Food prices have risen almost 250% in a year in regime areas, with sharp reductions in subsidies for essentials such as bread. About 12.4 million Syrians are “food insecure”. There are regular blackouts and shortages, including of petrol, with the regime unable to fill tenders for key imports.

In July, as he was inaugurated after a staged election, Assad blamed conditions in neighboring Lebanon, where a financial crisis has affected the accounts of the regime elite and many Syrian businesses and individuals.

Iran has provided billions of dollars in lines of credit for the Assad regime since 2011, but the assistance has been limited by Tehran’s own economic problems. The new Raisi Government is facing inflation of more than 50%; a currency, already historically low, which is weakening; rising unemployment; and protests over shortages and blackouts.

SANA declares that “the Iranian Ambassador, for his part, asserted that his country will continue to provide support for the Syrian people in the face of the unjust sanctions imposed on them, and in the stage of reconstruction”.