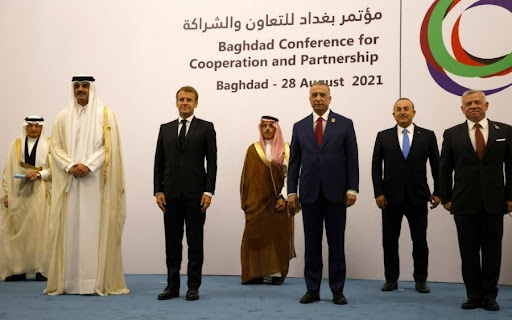 Amir Abdollahian said in a televised interview on Monday night, “I think I stood where the real position of the Islamic Republic of Iran and its representative was.”

Amir Abdollahian played down any snub to Saudi Arabia after refusing to stand next to its Foreign Minister for the conference photo. He said that “there was a greeting” with his Saudi congratulating him and saying that Riyadh is “waiting for the new [Iran] government to be established”.

See also Iran: No Resumption of Nuclear Talks for “2 to 3 Months”

ORIGINAL ENTRY, AUG 29: Iran has suffered a diplomatic setback at a regional security conference in the Iraqi capital Baghdad.

For weeks, Iranian officials and media played up the conference as an opportunity for Tehran to projects its regional influence. Iraq’s Prime Minister Mustafa al-Kadhimi was celebrated when he made the invitation during a visit to the Iranian capital. Iran’s outlets spoke of reconciliation with long-time rival Saudi Arabia, with whom diplomatic relations were broken in January 2016.

But Saturday’s conference ended with Iranian media venting anger at France’s Emmanuel Macron, who took the headlines with his call for a united front against the Islamic State, and with a dispute over the placement of Iranian Foreign Minister Hossein Amir Abdollahian for the official photograph.

Referring to developments in Afghanistan, including Islamic State Khorasan’s killing of more than 170 people in a bombing on Thursday, Macron said:

Given the geopolitical events, this conference has taken a special turn….

We all know that we must not lower our guard….No matter what choices the Americans make, we will maintain our presence in Iraq to fight against terrorism.

After a meeting with Macron, Kadhimi upheld Iraq and France as “key partners in the war against terrorism”.

#Iran's IRGC-linked Tasnim news agency has criticised the organisers of the Baghdad summit for omitting Syria and accused France of trying to carve out a place for itself in the Middle East following the US' "defeat" in Afghanistan.https://t.co/xqMiZNfBFk

With Abdollahian in Damascus on Sunday, the Assad regime’s Al Watan snapped, “The ‘Cooperation and Partnership’ conference reveals the hypocrisy of the majority of its attendees and their attempt to evade support for terrorism.”

Expectations of an Iran-Saudi rapprochement at the summit appeared to be dashed by the dispute over positioning for the conference photograph.

Abdollahian’s spot appeared to be in the second row, next to the Saudi Foreign Minister, but he moved up to the front alongside other leaders.

Tasnim insisted that Abdollahian was meant to be at the front all along; however, the site undercut its assertion with its photo showing an empty spot in the second row.

Telegram channels linked to the Revolutionary Guards hailed the episode as a snub to the Saudis, praising Abdollahian’s “commendable” and decisive” decision.

A signal of strength from Tehran. pic.twitter.com/IzvbILGfQz

The State English-language outlet Press TV ignores the incident, and the criticism of Macron, with its focus on Abdollahian’s more diplomatic line: ““What we need more than ever today is ‘sustainable regional security’ with the participation of the countries of the region.”