Iran Shakes Fist at Israel After Tanker Explosion Near Syria 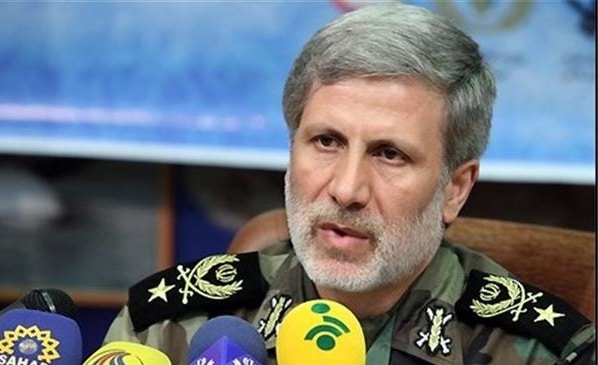 Iran’s Defense Minister has shaken his fist at Israel after Saturday’s explosion on a tanker off the coast of Syria and this month’s blast at the Natanz nuclear complex.

Brig. Gen. Amir Hatami (pictured) proclaimed on Sunday, “The power wielded by the Islamic Revolutionary Guards Corps and Army have provided the country with security today and awarded it with active deterrence capability.”

He asserted that while Iran’s enemies have a hard time with this reality, they should know that Iran’s troops “will resolutely keep on the path of the country’s martyrs in their purpose to safeguard the nation and Islam” under the Supreme Leader’s command.

He did not ascribe responsibility to Israel for Saturday’s explosion, near the Syrian port terminal of Baniyas.

Iranian media have put out conflicting accounts about the blast, which reportedly killed three people.

Some outlets initially said the cause was an Israeli drone attack, but others retreated from this and claimed a welding accident. Still others ignored the incident.

TankerTrackers said the damaged tanker is Beirut-registered, but assisting an Iranian supertanker in offloading oil.

Multiple sources have described an Israeli campaign to deny oil to Syria’s Assad regime, which is facing a fuel crisis, with attacks on Iranian tankers. The Israeli daily Haaretz claimed that “several dozen” have inflicted “billions of dollars” of damage.

Western and Israeli officials have said that the explosions are also targeting Iran’s transport of weapons, including to its Lebanese ally Hezbollah.

Israel has periodically struck Assad regime and Iranian targets during Syria’s 121-month conflict. The attacks have tried to limit production of conventional and chemical weapons and to restrict the movement of Iranian weapons. They have also supported the demand of the Netanyahu Government for the withdrawal of Tehran’s forces, which — along with Russia and Hezbollah — have prevented the fall of Bashar al-Assad.

Hatami also did not specifically cite the April 11 attack on the Natanz complex, one of Iran’s two primary facility for nuclear research and development. The blast damaged centrifuges, just after President Hassan Rouhani had hailed the installation of advanced units, breaking the limits of the 2015 nuclear deal.

As talks over the deal continue in Vienna, Iran has announced its first enrichment of uranium to 60%, just short of the 90% requred for military use.

Last Thursday, an Assad regime anti-aircraft missile exploded in the air about 20 miles short of Israel’s nuclear complex at Dimona.

Defense Minister Benny Gantz and the Israeli military said the missile was stray fire, aimed at an Israeli warplane in Lebanese airspace carrying out an attack in southwest Syria.

Iran did not claim a deliberate attack, but Revolutionary Guards commanders hinted at the possibility. Gen. Mohammad Reza Naqdi said, “What happened…could not be covered up, so when someone commits evil, he should expect his evil to return to himself.”