President Rouhani — Iranians “Have Right” to Protest Lack of Water 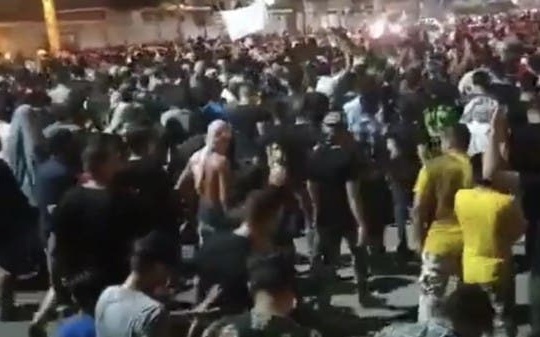 A demonstration in Susangerd in Khuzestan Province in southwest Iran, protesting lack of water, July 2021

President Hassan Rouhani has said that citizens have the right to protest, as demonstrations n southwest Iran over water shortages entered a second week.

Rouhani said on State TV that those in Khuzestan Province, the center of the rallies, “have the right to speak, express themselves, protest, and even take to the streets within the framework of the regulations.”

The President’s comments came amid confirmation that a 20-year-old demonstrator was killed and two teenagers wounded in Lorestan Province.

Activists say at least eight people have been slain. Iranian officials have acknowledged four deaths, claiming all were killed by “rioters”, as well as that of a police officer.

Rouhani backed the official narrative, “It is possible that a malicious person could take advantage of the situation, come in the middle of it all and use a gun, shoot and kill one of our dear citizens….If there is a problem, I ask the people of Khuzestan to solve it legally.”

The secretary of the Supreme National Security Council, Ali Shamkhani, said, “The security forces had been ordered to immediately release those detained during the recent incidents in Khuzestan who had not have committed a criminal act.”

In his first, brief comment on the situation, the Supreme Leader wrote on Instagram on Wednesday, “Authorities are obligated to solve problems in Khuzestan. Anyone who cares about people, cannot remain indifferent to the difficulties facing Khuzestan. This is the definite task and permanent and immediate duty of all governments to care about people.”

Protests in southwest Iran over water shortages are ongoing, with reports of more killing of demonstrators.

Activists claim at least seven protesters have been slain since the rallies began last Thursday. Iranian officials put the toll at three, claiming all were killed by “rioters” rather than security forces.

The authorities continue to restrict the Internet in an attempt to suppress news of the demonstrations; however, some videos are still being circulated.

"I want my rights," he adds before what sounds like a gunshot is heard. "Don't shoot. Be a man." https://t.co/GVWgyEFbru

And the Iranian Labor News Agency has acknowledged the seriousness of the situation, interviewing Professor Hussein Raghfar. He cites poverty, unemployment, bread shortages, and drought across southern Iran from Khuzestan to Sistan and Baluchestan Provinces.

“What we are witnessing today is the product of the rule of thought that has ruled the country’s economy and politics for more than three decades,” Raghfar says.

Khuzestan Province in southwest Iran has seen a fifth night of protests over water shortages.

Demonstrations were reported in cities such as Ahvaz, Ramhormoz, and Susangerd.

Videos are slowly emerging on Twitter of a fifth night of protests over water shortages in #Iran's Khuzestan Province.

The video below, which was reportedly filmed in Ahvaz, shows protesters chanting in Arabic. Children are seen among the protesters.pic.twitter.com/924Y0C2aMq

Protests over water shortages are continuing in Khuzestan Province in southwest Iran:

Protests in Khuzestan Province continued for a fourth consecutive night amid reports of internet disruptions, which may explain why so few videos were available yesterday compared to previous days.

Trying to restrict the gatherings, authorities have almost shut down the Internet in Khuzestan. “Severe disruptions” have also been reported in the capital Tehran.

At least two people have been killed in the demonstrations since last Thursday.

In his speech on Monday for the Hajj pilgrimage, the Supreme Leader did not mention the protests, the shortages, or blackouts throughout Iran. Instead, he proclaimed “resistance in the face of the interference and evil of America and other transgressing countries”.

At a ceremony for agricultural projects, President Hassan Rouhani tried to assuage concern: “Water is the source of life for all creatures; however, in the discussion of agriculture, soil also has an important place and is a great asset that we must do our best to preserve.”

Rouhani blamed shortages on a 52% drop in rainfall this year and 50 years of drought: “Unfortunately… the dear people of Khuzestan and some other provinces are in trouble.”

Amid the pressure on Iran’s electricity grid, factories making auto parts have lost power for up to six hours each day. Production costs have increased 20%, and output reduced by 30%.

Manufacturer Reza Rezaei says, “When the electricity is suddenly cut off, the raw material turns into waste. Amid rising prices of production inputs, the producer suffers a great loss.”

Up to 1 million Iranians working in the auto industry may be affected.

Protests over lack of water are in a third day in Khuzestan Province in southwest Iran.

The shortages came amid the worst drought in 50 years. Demonstrations began on Thursday across several cities and towns.

The top official in the town of Shadegan blamed the demonstrators for the death: “During the rally, rioters shot in the air to provoke the people, but unfortunately one of the bullets hit a person present at the scene and killed him.”

Rouhani said on Wednesday that the refusal to pass bills for Iran’s accession to the Financial Action Task Force, had perpetuated sanctions and limits on the banking sector.

He noted that foreign and local investors will not be willing to particapate in necessary projects, as long as the Expediency Council has not resolved the outstanding bills on FATF.

“It is not possible to do anything without capital and with empty hands. Today, it must be explained to people what the problem is and why we cannot bring enough investments into the country’s market,” Rouhani added.

The President, who leaves office in early August, cited infrastructure projects, such as in the water industry, which require between $200 billion to $300 billion.

The Financial Action Task Force is the global monitor of money laundering and terrorist financing. Hardline Iranian politicians have blocked any Iranian involvement, claiming it limits the country’s sovereignty.

An angry woman chides a local bureaucrat and takes off her hijab in protest:

"To hell with your compulsory hijab. I'm taking it off in front of you".

As Iran is in the throes of serious power outages, this brave woman showed up at the state-run electricity company and said "enough with this regime".

Many Iranians are at a breaking point with the regime pic.twitter.com/eo74UYtIpF

Facing a potential crisis over the electricity grid, the Iranian Government is limiting industries to 10% of their normal consumption.

First Vice-President Es’haq Jahangiri issued the decree on Tuesday, “The Energy Minister is allowed from tonight to prohibit industries from using more than 10% and any breach will with be dealt by the required action.”

President Hassan Rouhani has apologized to Iranians for unplanned blackouts, behind the scheduled cuts of power amid surging demand, damage to Iran’s infrastructure, and mining of cryptocurrency.

The manager of State electricity company Tavanir said cuts will initially be implemented in large manufacturing units where electricity consumption is high.

Fars, the outlet of the Revolutionary Guards, warned on Wednesday that the continuation of high demand could lead to “deep economic and social crises in the country”.

Iran’s energy sector has been struck by a series of explosions and fires this spring and summer.

In the latest incident, a pipeline exploded in an oilfield in western Iran, killing three workers and injured four.

Most of Tehran and nearby Karaj were dark from Saturday night at 11 p.m. The outage was not part of scheduled cuts imposed in recent months, including one on Saturday between 8 and 10 p.m.

Some parts of the capital were blacked out until 5 a.m. Sunday.

Other cities from Rasht on the Caspian Sea in the north to Bandar Abbas on the southern coast also went dark.

Iran’s power consumption has increased by more than 10%, compared with last year, to surpass 60,000 megawatts per day. Use peaked at 64,000 megawatts on June 29. Meanwhile, electricity generation has remained about 50,000 to 56,000 megawatts.

The gap has been compounded by the loss of the Bushehr nuclear reactor since June 20. State media said the reason was a “technical overhaul”. However, the outage came amid recent attacks on Iranian facilities, including the main nuclear research and development complex at Natanz, which have been blamed on Israel.

Authorities are also concerned about the drain on the grid by miners of cryptocurrency. In May, the Government banned the mining until mid-September. However, the Industry Minister then issued licenses to 30 mining operators.

Parliament Speaker Mohammad Baqer Qalibaf criticized the unplanned outages in a Monday morning tweet: “If the increase in consumption and excess demand is not covered in the short term for any reason, at least stick to the announced blackout schedule so that people can plan for the problems. People are upset by all this.”