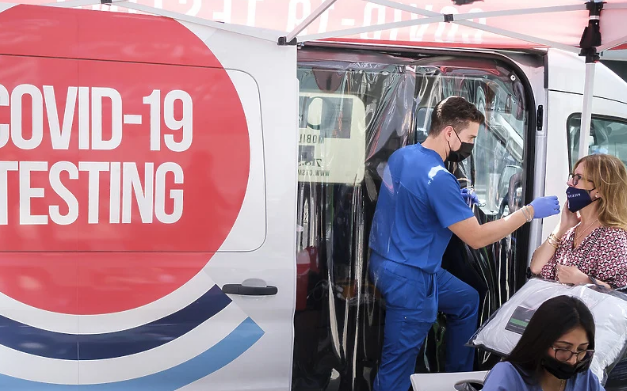 The director of the Center for Diseases Control and Prevention says the US is at a “pivotal point” as the Delta variant of Coronavirus spreads and a minority of Americans refuse vaccinations.

Rochelle Walensky said the country is “not out of the woods yet” despite the administration of almost 340 million doses and the full vaccination of 162 million US adults.

There were 362 deaths yesterday, bringing the total for the pandemic to 610,177.

But Republican legislators continued to hedge on statements urging vaccinations, portraying the issue as one of personal choice.

Rep. Greg Murphy of North Carolina maintained, “This vaccine is a medicine, and just like with any other medicines, there are side effects and this is a personal decision.”

The Republicans had said the conference was to promote vaccinations, but spent much of their time declaring that China had released a human-made virus on the world and Democrats covered up Beijing’s actions.

Gov. Ron DeSantis of Florida, a Trumpist and likely 2024 Presidential candidate, loudly held out against containment measures on Thursday despite the state’s leading position in the Coronavirus surge.

DeSantis said there will be no mask mandates in schools or Covid-related restrictions this autumn.

Florida has contributed about 20% of the rise in US cases in recent weeks. There were 8,000 on Wednesday. Some major hospitals have restored visitation limits and cut back on elective surgeries.

But the governor insisted earlier this week, “It’s a seasonal virus and this is the seasonal pattern it follows in the Sun Belt states,” expressing the belief that cases will drop in August.

Asked about DeSantis’s portrayal of masks as juveniles “muzzled and having their breathing obstructed all day long”, White House Press Secretary Jen Psaki said, “If I were a parent in Florida, that would be greatly concerning to me.”

The Surgeon General supports local mask mandates as Coronavirus cases surge in the US.

Murthy referred to Los Angeles County, which reintroduced a mandate last week, in a Sunday interview: “It’s very reasonable for counties to take more mitigation measures like the mask rules you see coming out in L.A., and I anticipate that will happen in other parts of the country too.”

The Centers for Disease Control and Prevention said in May that fully vaccinated individuals do not have to wear masks when shopping, dining at restaurants, or gathering indoors. The Los Angeles mandate requires both vaccinated and unvaccinated people to wear masks inside public locations.

The chair of the Los Angeles County Board of Supervisors, Hilda Solis, noted cases reached 1,900 a day last week: “I’m not pleased that we have to go back to using the masks in this manner, but right now it’s going to save lives and that’s what most important.”

Vice President Kamala Harris emphasized the need to maintain vaccinations, with almost one-third of adults still not receiving or refusing a first dose.

This Delta variant is no joke. Get vaccinated.

A CBS News poll found 72% of fully vaccinated Americans are concerned about the Delta variant, compared to only 48% of unvaccinated and partially vaccinated.

The good news is not only is the vaccine highly effective at preventing severe infection, like hospitalizations and deaths, but even if you do have a breakthrough infection, which, again, happens in a very small minority of people, it’s likely to be a mild or asymptomatic infection. So my hope is that people will feel reassured by that.

ORIGINAL ENTRY, JULY 18: Daily Coronavirus cases in the US have spiked to their highest point in 2 1/2 months, as the Delta variant spreads through the country.

Authorities reported 51,891 cases on Friday, the highest level since April 30. The 7-day average is 30,704, the greatest number since May 18 and a 70% rise in a week. The 7-day average for hospitalizations has increased 36% in the past week.

The 7-day average had fallen to 11,311 on June 23, a decline of more than 95% since early January as the Biden Administration oversaw a mass vaccination campaign across the US.

But in recent weeks, the Delta variant — which originated in India, but spread rapidly through much of the world including Europe — has taken hold in parts of the country, making up than more than 70% of cases in some states. At the same time, a minority of Americans are continuing to refuse vaccinations.

Florida, with about 47% of residents vaccinated, accounted for 20% of new cases last week. Four states were responsible for more than 40%.

Rochelle Walensky, director of the Centers for Disease Control and Prevention, said Friday:

There is a clear message that is coming through: This is becoming a pandemic of the unvaccinated. We are seeing outbreaks of cases in parts of the country that have low vaccination coverage because unvaccinated people are at risk, and communities that are fully vaccinated are generally faring well.

Walensky confirmed that the unvaccinated make up more than 97% of hospitalizations and almost all deaths.

Surgeon General Vivek Murthy highlighted the damage of misinformation about vaccines and the virus, calling on social media platforms, news organizations and individuals to “call this activity out”.

President Joe Biden was even blunter on Friday afternoon, in a comment about those spreading misinformation on Facebook: “They’re killing people.”