Fauci: Coronavirus “Going In Wrong Direction” Because of Vaccination Refusals 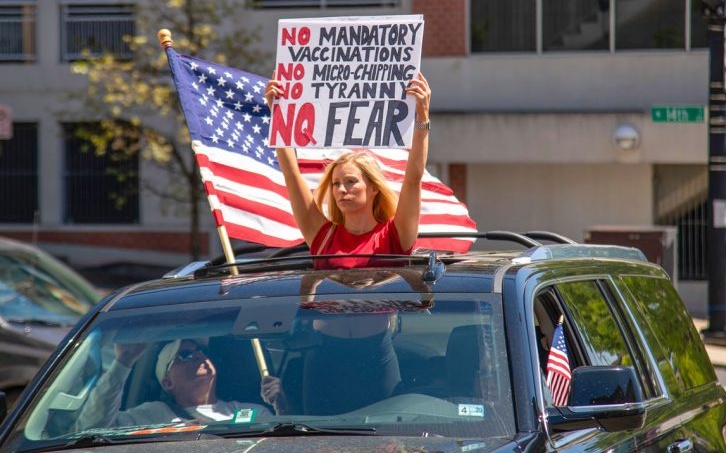 A woman objects to the Coronavirus vaccine in a Virginia demonstration, April 2020 (Matthew Rodier/SIPA USA/AP)

Dr. Anthony Fauci, the White House’s top Coronavirus expert, says the pandemic is “going in the wrong direction” in the US because of those refusing vaccinations.

Fauci spoke on CNN on Sunday about the recent rise in cases and deaths, following a sharp drop amid the Biden Administration’s mass vaccination drive.

“It’s not going to be good,” he said bluntly.

The rate of vaccinations has fallen more than 80% since mid-April because of the refusals, amid widespread disinformation about the vaccines. About 69% of American adults have had one dose, while 60% are fully vaccinated.

Local medical and public health officials in Louisiana, one of the five states with the lowest rate of vaccinations, have spoken of the difficulty of persuading adults to protect themselves, their families, and their communities.

Right-wing attack sites and followers of Donald Trump feed the refusal with falsehoods such as vaccines as “experimental gene therapy”, killing thousands of Americans, and the Biden Administration sending people door to door to document unvaccinated Americans.

Louisiana has the second-highest average daily case count per 100,000 people in the US.

“We are unfortunately the leading edge of the Delta surge,” says Dr. Joseph Kanter, the state’s top health official. “We lost all the progress we had made.”

A similar story is unfolding in Alabama, which has the lowest vaccination rate in the US with just over 30% of adults inoculated.

“Until it starts hitting here really bad again, these people aren’t going to get the shot,” says Mike Melton, the vaccination project manager for Lauderdale County in northwest Alabama.

Fauci is facing a sustained campaign to undermine his reputation, led by the attack sites, Trumpists, and politicians like Sen. Rand Paul of Kentucky.

Dr. Fauci Calls Out Sen. Paul’s Coronavirus Disinformation: “You Do Not Know What You Are Talking About”

Many public health officials have been fired or resigned, including the top vaccine advisor in Tennessee.

Some Republican Governors, including in the states with the lowest vaccination rates, are making public appeals. Communities are debating local mask mandates.

But at least 15 state legislatures have passed or are considering measures to limit the legal authority of public health agencies. Legislatures in at least 46 states have introduced hundreds of bills seeking oversight of gubernatorial or executive actions during the pandemic or other emergencies.

Gov. Ron DeSantis of Florida — which is leading the US in surge of Coronavirus cases — loudly proclaimed last week that he will reject mask mandates and other containment measures.

In Shreveport in northwest Lousiana, the parish council voted last Thursday to postpone any measure. On Friday, Mayor Adrian Perkins — who was sued last year when he tried to implement a mandate — announced a new advisory urging residents to wear masks indoors.