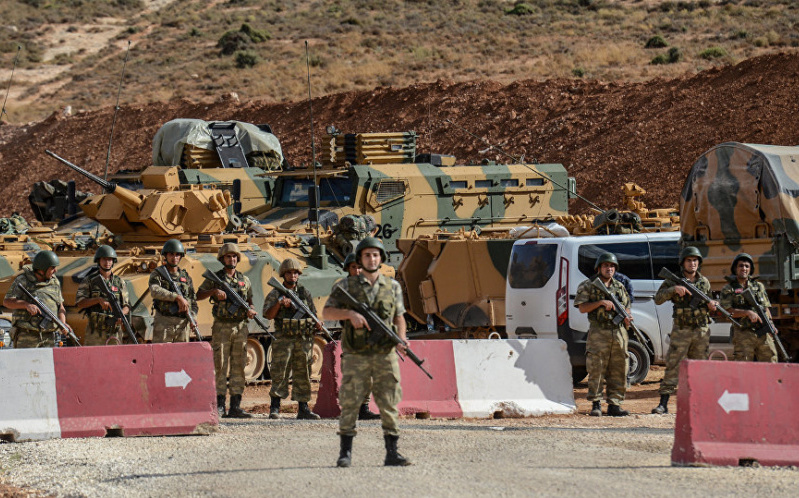 Turkish troops at an observation post in northwest Syria (File)

Local activists and the White Helmets civil defense report a barrage of Grad rockets on Afrin city in northwest Syria. They claim the firing came from areas held by the Kurdish-led Syrian Democratic Forces or the Assad regime.

Missile strikes hit the residential neighborhoods of #Afrin city and the Syria civil defense center. The missile attacks which were from the regime and SDF-controlled areas resulted in injuries of 8 civilians including 4 children, 2 women, and 2 men one of them seriously injured. pic.twitter.com/Z40yr4Onr8

Afrin is at the center of the Kurdish canton captured by Turkey and anti-Assad rebels in spring 2018.

#Syria: moment the Civil Defense center was struck by a Grad rocket today in #Afrin. pic.twitter.com/KvkLeT11sj

The troops were in an armored vehicle, on its way to a Turkish base, near Al-Bab in Aleppo Province.

The Defense Ministry said Turkish forces launched retaliatory fire at “terrorists”. The Ministry did not attribute responsibility to any faction.

However, a pro-opposition activist said Turkish forces fired artillery at an area, south of Azaz, held by the US-supported, Kurdish-led Syrian Democratic Forces.

#Syria: an artillery strike hit a #TSK base near Al-Bab in the N. #Aleppo countryside. Casualites among Turkish troops. Retaliatory fire ongoing. pic.twitter.com/n5zwGJfb5Z

In 2016, Turkish forces entered northern Syria, alongside anti-Assad factions, to push out the Islamic State. In spring 2018, a Turkish-rebel offensive seized most of the Kurdish canton of Afrin.

Turkey considers the Kurdish YPG militia to be part of the Turkish Kurdish insurgency PKK, which has fought Ankara’s security forces for almost 40 years.