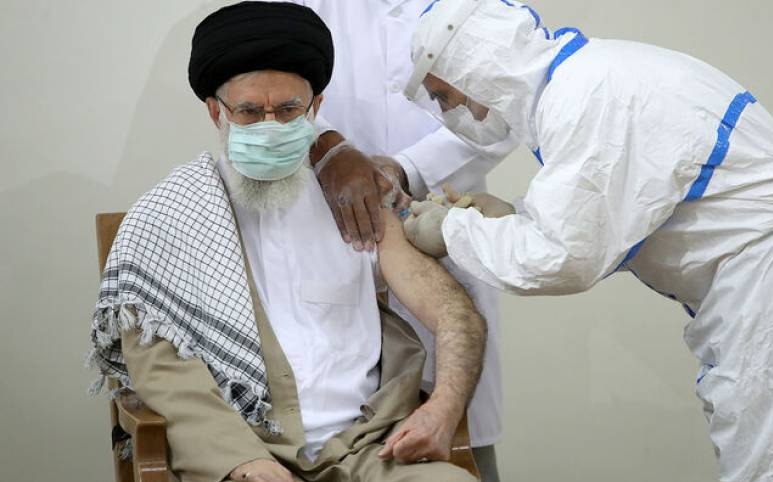 The Health Ministry announced 34,433 Coronavirus cases on Thursday, close to Tuesday’s daily record for the pandemic.

The Ministry reported another 292 deaths, bringing the total to 89,782.

The Health Ministry said 232 cities in the country are coded red (very high-risk), while 117 are in the orange zone (high-risk).

Based on a decision by the National Task Force for Fighting the Coronavirus, travel to and from these cities is prohibited.

The number of the country’s yellow (medium-risk) and blue (low-risk) cities are 99 and zero, ‎respectively, according to the ministry.

Iran has shattered its record for daily cases of Coronavirus.

The Supreme Leader has blamed “foreign vaccine sellers” for Iran’s new record in daily Coronavirus cases amid a “fifth wave”.

Ayatollah Khamenei issued the statement on Friday after receiving a second dose of the domestically-produced COVIran Baraket vaccine in Tehran.

“This issue once again reminded the people and officials that relying on others causes problems, so we must be able to stand on our own feet in all matters,” he proclaimed.

Khamenei contributed to Iran’s difficulties by barring all use of vaccines made in the US or the UK. The edict ruled out international deliveries include the Pfizer/BioNTech, Moderna, or AstraZeneca versions.

The rate of Iranians given one dose rose from 5.3% to 7.1%; however, less than 3% have been fully protected.

The Health Ministry reported 21,814 cases on Friday, following a record 27,444 on Tuesday. There were another 210 deaths.

Iran has set a daily record for Coronavirus cases amid its fifth wave of the pandemic.

The Ministry reported 250 deaths, the highest rate since May 24.

There was limited good news about vaccinations. A surge in inoculations in the past week has increased the number of Iranians receiving one doses from 5.3% to 7.1%. However, only 2.8% of the population is fully vaccinated.

Iran has officially recorded 87,624 deaths and more than 3.58 million cases.

Iran’s official daily toll of Coronavirus deaths has passed 200 for the first time since May 31.

The Health Ministry announced 201 fatalities on Thursday. The seven-day average of 171 is up 40% since June 25.

The Iran Red Crescent Society said that it received more than 1.1 million Coronavirus vaccine doses, bringing the total during the pandemic to more than 7 million doses.

However, more than five months after the first vaccination, only 2.6% of the population of 83 million is fully inoculated. Only 5.3% have had at least one dose.

Unable to get Coronavirus vaccinations amid the Government’s stuttering program, Iranians are travelling by air and land to neighboring Armenia for inoculations.

Thousands of people crossed the border, where there are more vaccine doses than people willing to take them among Armenia’s 3 million population.

Armenian officials announced in May that they would provide free vaccines to foreigners without registration. Mobile clinics have been set up in the streets.

Iran has only distributed 5.72 million doses, more than five months after the first inoculation, among its 83 million people. Only 2% of the population, 1.64 million, have received two doses.

The Health Ministry announced 17,664 cases on Sunday, bringing the seven-day average to 16,947 — more than double that of a month ago.

President Hassan Rouhani has issued a further gloomy report about the “fifth wave” of the Coronavirus pandemic in Iran.

Rouhani told the National Coronavirus Task Force on Saturday, “Every effort was made to keep the mutated virus trapped in the southern and eastern provinces, but despite all efforts, the [Delta variant] has penetrated deep into the country and the situation is more unfavorable than in previous week.”

The President said that the situation has been worsened by Iranians’ failure to observe health protocols: “Unauthorized gatherings and unnecessary traffic make the situation worse for this disease and it must be dealt with seriously.”

He found some consolation in a reduced mortality rate from the infections.

The Ministry announced 136 deaths yesterday, with a seven-day average of 144.

President Hassan Rouhani, who warned of a “fifth wave” earlier this week, told the National Coronavirus Task Force on Thursday that “all necessary measures” should be pursued for containment.

The number of cities declared as “red zones” has risen to 143. There are no longer any “blue zones” — areas where there is little risk — in Iran.

The meeting declared that vaccination targets will be reached in August; however, Iran has only administered about 5.7 million doses — 3.4% coverage of the population. At the current rate, only 10% of people will be protected by the end of February 2022.

Iran has officially declared 85,397 deaths with more than 3.33 million cases.

ORIGINAL ENTRY, JULY 3: Iran’s President Hassan Rouhani is warning of a “fifth wave” of the Coronavirus pandemic in the country, as cases and deaths rise again.

Rouhani told the National Coronavirus Task Force on Saturday, “Unfortunately, today we are in a special situation and we are facing an increase in the prevalence of this disease. Despite warnings in recent weeks, during the [Presidential and council] elections, the measures taken were not in line with health protocols.”

He noted the spread of the Delta variant, with “an acute situation in the southern provinces of the country”, and the prospect that cities will again be declared “red zones”.

Iran set records for cases and deaths in the fourth wave of the virus this spring. Cases more than tripled to a seven-day average of 24,003 per day and fatalities rose by 600% to a peak of 462 on April 27.

Renewed restrictions more than halved the daily cases and brought the death rate down by 70%. However, cases have climbed again in the last three weeks, reaching a seven-day average of 11,678 per day.

The Health Ministry reported 13,836 cases and 127 deaths on Friday.

Iran has officially recorded 84,516 deaths amid more than 3.23 million cases.

Rouhani tried to find hope on Saturday, “The situation in our country is getting better day by day in terms of vaccines, both foreign and domestic.”

However, five months after officials declared the launch of vaccinations, only 2% of the population is fully vaccinated and less than 5% has received one dose.

The Supreme Leader was inoculated on State TV with the first dose of a domestically-produced vaccine last week. But there is still no sign of a rollout of the CovIran Barekat doses.