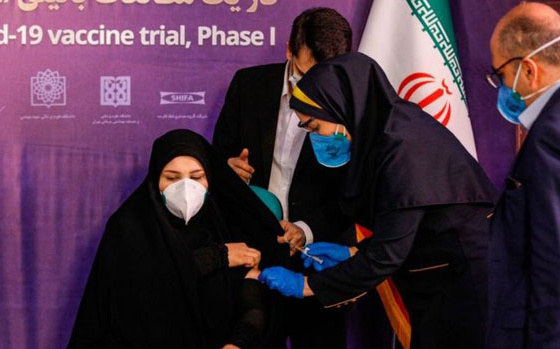 A woman is injected in Iran’s first trial of a domestically-produced Coronavirus vaccine, December 2020

After the Supreme Leader’s ban on Coronavirus vaccines from the US, UK, and France, President Hassan Rouhani has scrambled to reassure Iranians that the inoculations will proceed.

Whether the vaccine is made domestically or the vaccine is purchased from reliable companies that are 100% trusted, the Government will definitely take the necessary measures in this regard.

The President mentioned that the Government has paid for the vaccine from COVAX, the World Health Organization’s vehicle for delivery, claiming “millions of doses of the vaccine have been purchased and provided”.

But he did not mention that those “millions of doses” are effectively held up because of the Supreme Leader’s ban, backing the Revolutionary Guards who have claimed that vaccine manufacturers are seeking to reduce the world’s population by 20%.

The three vaccines approved for inoculations all have links to the US or UK: from the American company Pfizer and Germany’s BioNTech; from the US firm Moderna; or from Astra Zeneca and the UK’s Oxford University.

Ignoring the obstacle, Rouhani said, “We are also looking to provide vaccines from other sources. Therefore, I want to tell our dear people that they should not worry about this at all.”

He referred to a “homegrown” vaccine, but Iran’s domestic version is still in the early stages of trials on human subjects.

ORIGINAL ENTRY, JAN 9: After a public command from the Supreme Leader, Iran has halted its import of the Coronavirus vaccine developed by the US and Germany companies Pfizer and BioNTech.

A spokesman of the Iranian Red Crescent Society, Mohammad Hassan Qosian Moqaddam, said on Friday, “The import of 150,000 doses of the coronavirus vaccine [developed by] Pfizer Inc, from the United States to the country…is cancelled.”

Earlier in the day, Ayatollah Khamenei said in a televised speech, “I have already said it to Government officials, and now announce it publicly. The import of American and British vaccines is prohibited.” He also objected to imports from France.

See also Iran’s Supreme Leader Exploits Turmoil in Washington: “Even Their Friends Are Making Fun of Them”

The Rouhani Government had pursued the imports, and Central Bank head Abdolnasser Hemmati said last month that the US Treasury had waived sanctions so Tehran could purchase the vaccines with Iranian funds from South Korea. He added on January 5 that prepayment for 16.8 million doses had been made to COVAX, an initiative sponsored by the World Health Organization.

Iranian specialists in the US then prepared to ship the Pfizer/BioNTech doses.

But the Revolutionary Guards loudly objected, declaring that none of its troops would be vaccinated. Deputy Commander Brig. Gen. Mohammad Reza Naqdi said last week that vaccine producers are aiming to kill hundreds of millions of people, reducing the world’s population by 20%.

The Red Crescent spokesman responded to Khamenei’s statement that vaccines could be obtained from “reliable” nations: “We are ready to cooperate, if necessary, in case the Ministry of Health, Treatment, and Medical Education puts in a request from Eastern countries.”

The Health Ministry announced 82 deaths and 5,924 cases on Friday.

Rouhani: “No Foreign Testing on Iranians”

Bowing to the Supreme Leader’s will, President Hassan Rouhani added the symbolic if irrelevant remark on Saturday that foreign companies will not be allowed to test vaccines on Iranians.

No “foreign company” has requested trials on the Iranian population, but Rouhani maintained in a meeting of the National Coronavirus Task Force that “the Health Ministry prevented” the trials.

“We shall purchase safe foreign vaccines,” he declared, without saying which country would supply them.

Alireza Biglari, the geneticist in charge of the Pasteur Institute of Iran, said on December 28 that a binational project had entered its second trial phase. However, Iranian officials did not release the name of the partner nation.

Khamenei proclaimed on Friday, “In one case, they are testing a vaccine on human beings and it has proven to be successful.”