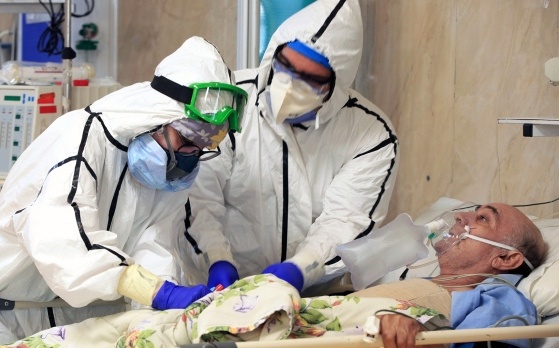 Medical personnel tend to a patient in a hospital in Tehran, Iran, October 14, 2020

Iran has set a record for daily Coronavirus deaths, with 496 on Monday.

Officials are warning that the situation will worsen in coming weeks, amid a “fourth wave” that began after gatherings for Iranian New Year and a failure to begin mass vaccinations.

Tuesday’s deaths surpassed the 486 officially recorded on November 16. The 7-day average of 420 is the highest level since 427 on November 30.

But Deputy Health Minister Iraj Harirchi warned, “The bad news is that for at least the next two weeks the mortality trend will be upward.”

The warning echoed President Hassan Rouhani, who told the National Coronavirus Task Force on Saturday, “The next two weeks are very sensitive. We have no choice but to intensify measures in the field of care and supervision.”

On March 27, a week after Iranian New Year, Rouhani told the same group, “I think the peak of this disease is over.” But daily cases have tripled since March 20, and deaths have risen 600%.

The Government finally imposed a partial lockdown in Tehran and other cities on April 10.

More than 2 1/2 months after publicly broadcasting the first vaccination, authorities are still struggling to provide inoculations. Despite receiving supplies of Russia’s Sputnik V vaccine and a first delivery from the international initiative COVAX, Iran has only administered 824,000 doses — less than 1.0% of the population.