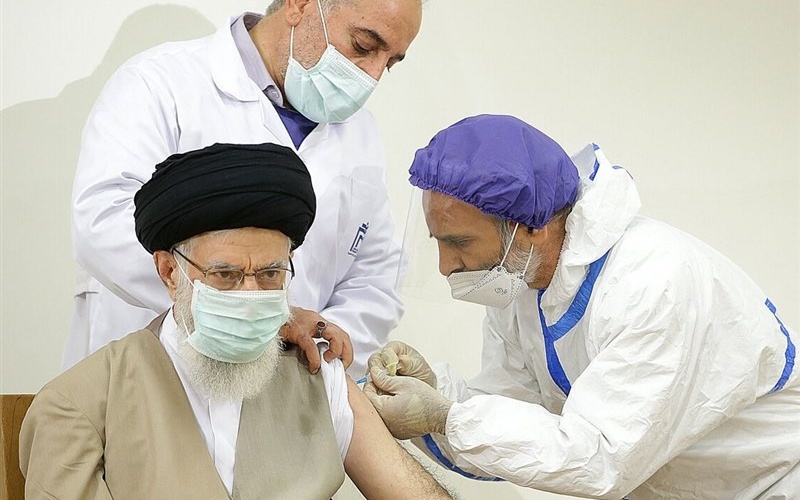 The Supreme Leader is the first recipient of Iran’s domestically-produced Coronavirus vaccine.

Ayatollah Khamenei was inoculated with the first dose of the COVIran Barekat vaccine on Friday.

Iran is still coming out of a deadly fourth wave, with 144 deaths announced on Friday. The official total for the pandemic is 83,588 with more than 3.15 million confirmed cases.

Only 1.2% of the population is fully vaccinated, 4 1/2 months after the first inoculation on State TV.

ORIGINAL ENTRY, JUNE 15: Iran’s officials say they have approved emergency use of a domestically-produced Coronavirus vaccine, as the country comes out of a deadly fourth wave of the pandemic.

He said another vaccine, produced jointly by Iran and Cuba, will be ready next week.

Namaki then pronounced that Iran will be known as a major global producer of the Coronavirus vaccine by the end of summer.

Iran proclaimed in early February that it had received supplies of Russia’s Sputnik V vaccine, with the first inoculation — of Namaki’s son — on State TV.

But the mass vaccination drive never materialized, and Iranians endured a trebling of cases between late March and mid-April, to a record of more than 25,000 per day. Deaths rose 600%, peaking at 496 on April 26.

The toll has declined since then, but cases have risen again in the last week with 10,715 on Monday. The Health Ministry announced another 119 deaths, taking the total to 82,217.

With no appearance of the promised vaccine campaign this spring, the Supreme Leader quietly withdrew his ban on vaccines produced in the US and UK. Oxford/AstraZeneca doses were in the first delivery by the World Health Organization’s COVAX program in early April.

Despite the shift, only 4.55 million doses have been administered. More than 4.3 million Iranians have received one dose but only 638,000 — 0.8% of the population — are fully vaccinated.

The domestic vaccine is produced by a subsidiary of state-owned conglomerate Setad. One of its officials said production began in early June, with “around 3 million doses” so far.