US Monitoring Iran Warships That Could Be Heading to Venezuela 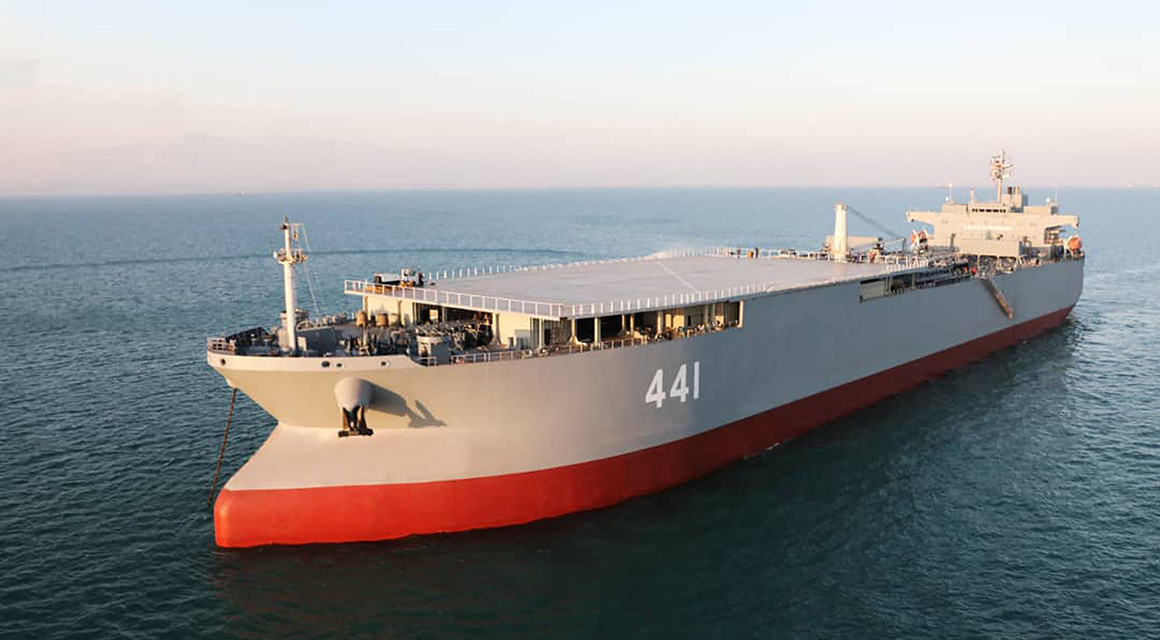 USNI News reports that satellite imagery shows the Iranian warship Makran, suspected of a mission to Venezuela, is carrying seven Fast Attack Craft which can be armed with missiles.

The craft are characteristic of the Peykaap boats used by Iran’s Revolutionary Guards.

Foreign Ministry Saeed Khatibzadeh said on Monday that Iran has “a legal right to move through all international seas”. He warned the US against any intervention with the Makran and the Iranian frigate alongside it.

ORIGINAL ENTRY, MAY 30: US authorities are monitoring two Iranian warships that may be moving to Venezuela.

“Three people familiar with the situation” told Politico that the ships are an Iranian frigate and the Makran (pictured), a former oil tanker converted to a floating forward staging base. The sources said they are moving south along the east coast of Africa.

American officials are not certain of the destination but believe it may be Venezuela. Iran has been shipping oil to the South American country, in defiance of US sanctions on both countries. Last summer, US authorities seized four Iranian ships taking cargo to Venezuela, claiming that they were part of a convoy traveling with an Iranian naval intelligence ship.

Tehran and Caracas have also been cooperating on joint projects such as automobile and cement factories.

One source said senior Venezuelan officials have been advised that welcome of the Iranian warships would be a mistake.

The Makran, commissioned last year, has been featured in Iranian media as a platform for electronic warfare and special operations missions. Iranian officials say the warship has advanced missile and weapons capabilities and can carry drones and six to seven helicopters.

In December, Adm. Craig Faller, the head of US Southern Command, said Iran’s strengthening military presence in Venezuela — including personnel from the elite Quds Force of the Revolutionary Guards — is “alarming”.

The tanker was seized on January 24 over a suspected illegal transfer of oil. A spokesman for the Indonesian Coast Guard, said the ship was allowed to go after a court decision earlier in the week.

The spokesman said the captain will be on a two-year probation without any fine.

Iran’s Foreign Ministry maintains the seizure was over “a technical issue [which] happens in shipping field”. However, industry analysts have said that Tehran is moving oil on the “gray market”, circumventing US sanctions with transfers at sea after vessels turn off transponders for GPS tracking.