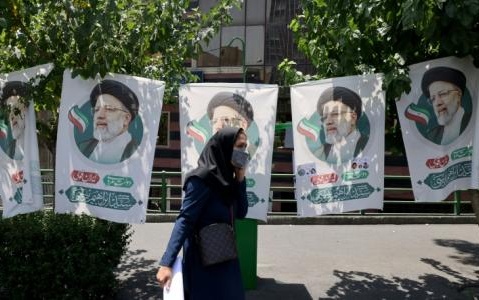 Embarrassed by the high number of protest/spoiled ballots in the Presidential election, politicians and officials are scrambling for an excuse.

Nasrullah Pejmanfar, the head of Parliament’s Article 90 Commission, is blaming the Interior Ministry for ballots that were “too similar” for the Presidential contest and those for the Assembly of Experts.

Pejmanfar said the commission has sent a letter to the Interior Ministry demanding an explanaton, and that “if the Ministry of does not respond properly, the monitoring capacity of this commission will be used to protect the people’s votes”.

Despite record low participation in a Presidential election in the Islamic Republic — a declared turnout of 48.8% and an effective turnout of 42.5% — the Supreme Leader has proclaimed that the vote is a defeat of “enemy propaganda”.

The great winner of yesterday’s election is the Iranian nation, which once again stood up against the propaganda of the enemy’s mercenary media and the temptation of ill-wishers, and showed its presence in the heart of the country’s political arena.

The US State Department expressed regret that Iranians could not participate in a “free and fair electoral process” in the Presidential ballot..

A spokesperson the US will continue the indirect talks with Iran in Vienna on renewal of the 2015 nuclear deal.

Israel’s Foreign Ministry noted Raisi’s role in the executions of tens of thousands of political prisoners in the late 1980s.

“The butcher of Tehran, Ebrahim Raisi, has been rightly denounced by the international community for his direct role in the extrajudicial executions of over 30,000 people,” said spokesperson Lior Haiat.

He continued that Raisi was “an extremist figure, committed to Iran’s rapidly advancing military nuclear programme and that the election “made clear Iran’s true malign intentions, and should prompt grave concern among the international community”.

The outcome of #Iran "election" was predictable. But nevertheless, that #EbrahimRaisi has risen to the presidency instead of being investigated for the crimes against humanity of murder, enforced disappearance and torture, is a grim reminder that impunity reigns supreme in Iran

Human Rights Watch’s Michael Page cited “repression and an unfair election” and said, “As head of Iran’s repressive judiciary, Raisi oversaw some of the most heinous crimes in Iran’s recent history, which deserve investigation and accountability rather than election to high office.”

So did Bashar al-Assad, whose regime has been propped up by Iran during Syria’s 123-month conflict.

The Interior Ministry, which provided no updates throughout the counting of ballots, has finally released an official tally for the Presidential election.

Iranian officials declared a turnout of 48.8%, below the previous record of 50.6% for a Presidential election, set in 1993.

However, even that is misleading. Of the 28,933,404 votes, there were 3,727,870 protest/spoiled/invalid ballots. That means the effective turnout, based on valid votes, was 42.5% — almost the same as the all-time low for an Iranian election, in the Parliamentary contests in March 2020.

In the 2017 Presidential election, the official turnout was 73%.

With the level of turnout yet to be confirmed, the Supreme Leader is proclaiming, “The great winner of the elections yesterday was the Iranian nation, which stood up once again in the face of the propaganda campaign waged by the enemy’s mercenary media and temptations of the ill-wishers and showed off its presence in the heart of the political field.”

Rouhani said, “We will stand by and cooperate fully with the President-elect for the next 45 days, when the new Government takes charge.”

The “preliminary” total of 28.6 million votes points to a turnout of just over 50%, avoiding the record low of 42%, in the 2020 Parlimentary election.

With Orf saying that about 10% of ballots have not been tabulated, the official declaration is likely to be above the low point of 50.6% turnout for a Presidential ballot in 1993.

Outgoing President Hassan Rouhani also said the winner was “clear” but he would avoid congratulating the “people’s choice” until the official announcement.

In the disputed 2009 election, Fars — the outlet of the Revolutionary Guards — declared before polls closed that President Mahmoud Ahmadinejad had gained 63% of the vote. Challenger Mir Hossein Mousavi called a press conference to offer indications that he was the actual leader in the count. The Iranian system then mobilized to declare Ahmadinejad’s first-round “victory” — with 63% of the vote — a few hours after the last ballot was cast.

More than a million Iranians took to the streets to protest the outcome, with the regime suppressing the dissent through thousands of detentions and the killing of scores of demonstrators. Mousavi; his wife, academic and artist Zahra Rahnavard; and fellow 2009 candidate Mehdi Karroubi have been under strict house arrest since February 2011.

A Managed Election for Victor and for Turnout?

This year the Guardian Council, whose 12 members are named by the Supreme Leader and the judiciary, disqualified all but 7 of 592 candidates. Potential frontline challengers to Raisi were banned, including 1st Vice President Esh’aq Jahangiri, former Parliament Speaker Ali Larijani, and ex-President Mahmoud Ahmadinejad.

Three of the seven approved candidates dropped out on the eve of the vote, leaving former Central Bank head Hemmati as the only alternative to the hardliners.

With Raisi’s victory all but assured in advance, attention turned to whether turnout would be a record low since the 1979 Revolution. Pre-election surveys indicated that the participation would be close to the record of 42% set in the 2020 Parliamentary elections, also dominated by hardliners.

The Supreme Leader tipped off concern on Friday morning as he voted. He told a reporter:

The reason we repeatedly ask people to participate in the elections is that this participation primarily influences the people. On the other hand, the country and the Islamic Republic of Iran will gain great advantages in the international arena due to the people’s participation.

Rouhani also urged Iranians to show up, after many centrists and reformists said that there was no reason for involvement in a pre-ordained outcome. He proclaimed an “epic and rare presence”: “Your glorious and enemy-breaking participation led to the remorse and dejection of enemies and those who wish ill on this nation.”

As with the votes, no figure has been given by the regime. State TV maintained through Friday that turnout was significant. Observers were far more cautious:

CNN are live in Tehran – our very own @fpleitgenCNN is on the ground at a polling station.