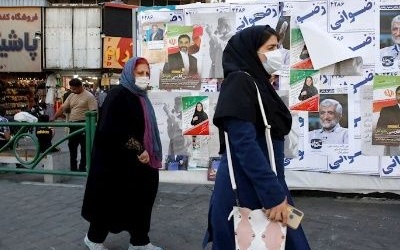 To gauge the mood of the Iranian people amid Friday’s Presidential election, one only has to hail a shared cab in the busy streets of Tehran. Once where you are going and for how much have been debated, conversation turns to the Rial v. Dollar exchange rate, when the Coronavirus pandemic will finally end, which football team has been playing well, and, more recently, the future of the Government.

Speculation is spreading that this election will have a low turnout, with the spread from 40% to 42% in spite of calls from the Supreme Leader to show up at the polling station. Some outlets are predicting turnout to be as low as 30%. If this transpires, Iranian officials will cite Covid-19. Others will assess that a proportion of the electorate feels there is no point in voting as the result is a foregone conclusion.

Polls inside Iran claim that there is more than 50% support for the favorite, the hardline judiciary head Ebrahim Raisi. The cab chatter bears this out. Driver Mohsen says he will support the cleric, purportedly backed by the Supreme Leader’s office, because he is tired of the failures of the Rouhani Government. Mohsen says he was a teacher and boasts of his degree in Geography; however, inflation and financial pressure forced him to driving the cab in his spare time to make ends meet.

A better economy is clearly the priority for many Iranians with the next government. The impact of US-led sanctions, the Coronavirus restrictions, and long-standing internal problems have put many on the point of substance.

Mohsen’s criticism of the Government was the staple of the hardline candidates, including Raisi, in the three televised debates. People want answers and accountability for the situation, especially the increase in fuel prices. The episode points to the limits on the President: Rouhani claimed that he woke up in the morning like everyone else to the sudden rise, but many questioned his leadership and integrity.

The seven candidates are now four, with the late withdrawals of hardliners Saeed Jalali and Alireza Zakani — both to support Raisi — and the reformist Mohsen Mehralizadeh to back the sole candidate outside the hardline-conservative camp, former Central Bank head Abdolnasser Hemmati. Nominally, the contest is between Raisi and Hemmati, but the Guardian Council’s bans — including of Vice President Esh’aq Jahangiri, former Parliament Speaker Ali Larijani, and ex-President Mahmoud Ahmadinejad — removed the most likely alternatives to the hardline cleric.

Supporters of Raisi claim that he can lead Iran out of the red and into the black. They cite his previous experience of managing the billion-dollar budget of the Astan Quds Razavi religious foundation, based at the Imam Reza shrine in Iran’s second city Mashhad. They uphold his ruthless fight against corruption and incompetence at the Justice Ministry.

But not everyone feels the same in the affluent Enghelab Sports Complex in the north of Tehran. Many people have no interest in voting or a concern about who wins. A middle-aged jogger, his dyed black hair contrasting with his white Apple Airpods, said he has not voted in the last 3 or 4 elections. He said he would rather use the time to meet friends, travel to the Caspian Sea in northern Iran, or spend time with his family.

The Guardian Council, the body of 12 men named by the Supreme Leader and the judiciary, have added to the latter sentiment with the mass disqualification of all but 7 of 592 candidates. The bans have dampened any desire for participation.

Rahim, a painter and decorator, was touching up ceilings with white paint and a tired-looking brush. He said in a thick Azeri accent that he had moved to Tehran from Western Azerbaijan Province in northwest Iran: “The only man I would have voted for is Ahmadinejad. He was on the only one who cared about the people of Iran. He was the one who took politics to the people outside of the capital city’.

So distaste for the current Government does not automatically translate into legitimacy for the next. The declared Presidential victor, almost certainly Raisi, will promise transparency and a Cabinet with the best-qualified ministers, featuring more women and younger representatives.

But no candidate has put forth detailed economic policies. The fate of the President, and arguably the Iranian system, may not be determined at the ballot boxes across Iran — but 4,000 km away in Vienna, the site of the talks over a renewed Iran nuclear agreement and the lifting of the American sanctions.

"James Lee" is the pseudonym of a political analyst who has been based in London and Tehran.