Obama: The Future of the Country Is At Stake 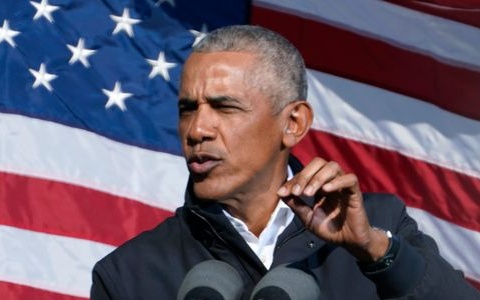 Former President Barack Obama at a Get Out The Vote Rally, Atlanta, Georgia, November 2, 2020 (Brynn Anderson/AP)

Urging Congress to pass legislation protecting and expanding voting rights, former President Barack Obama says the future of the US is at stake.

Obama and his wife Michelle spoke on Monday, a day before the Senate holds a test vote.

Republicans have blocked the For The People Act, with 60 votes needed in the 50-50 Senate to bypass the filibuster. Democratic Sen. Joe Manchin of West Virginia has led the drafting of the compromise measure after the GOP’s initial blockade.

In an interview with Yahoo News, Obama noted that many Republican-controlled state legislatures are trying to pass bills to restrict voting rights. Georgia and Florida have already done so, and only a Democratic walkout in the Texas Senate has prevented Gov. Greg Abbott from pushing through measures.

I have tried to make it a policy not to weigh in on the day-to-day scrum in Washington, but what is happening this week is more than just a particular bill coming up or not coming up to a vote.

I do want folks who may not be paying close attention to what’s happening…to understand the stakes involved here, and why this debate is so vitally important to the future of our country.

White House Press Secretary Jen Psaki said on Monday that Manchin’s compromise is a “step forward” in “a fight of [Joe Biden’s presidency”.

She said that if the For The People Act cannot clear the Senate vote, “The President’s effort to continue that fight doesn’t stop tomorrow at all.”

Sen. Manchin had held out against the original bill, but last week he introduced the compromise including 15 days of early voting, automatic voter registration, a ban on partisan gerrymandering, and voter ID requirements.

“We Are Not Immune”

Obama spoke about the danger to the US system, amid Donald Trump’s attempts to overturn the November election and the attack by Trump supporters on the US Capitol on January 6:

Around the world we’ve seen once-vibrant democracies go in reverse. It is happening in other places around the world and these impulses have crept into the United States….We are not immune from some of these efforts to weaken our democracy.

If we have the same kinds of shenanigans that brought about January 6, you know — if we have that for a couple more election cycles we’re going to have real problems in terms of our democracy long term.

Over the past few months, there’s been a movement in state legislatures all across the country to pass laws that make it harder for people to cast a ballot. That means we’ve got to pass the For the People Act before it’s too late.

This bill is one of our best chances…to ensure all of us have a say in our future – whether that’s issues like pandemic relief, criminal justice, immigration, healthcare, education, or anything else.