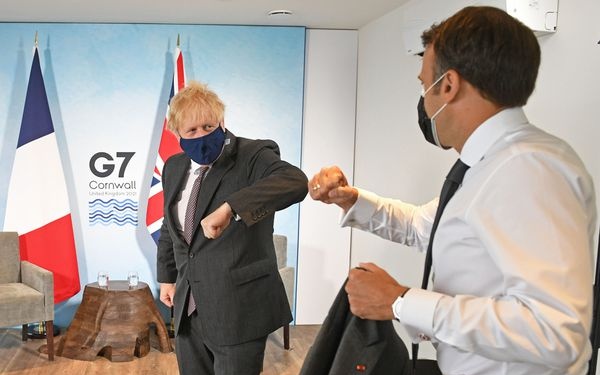 UK Prime Minister Boris Johnson had only one job.

Host the G7 Summit in Cornwall on June 12-13. Stand in the middle of the leaders’ photo with the English Channel behind them and a rare blue British sky above. Proclaim this as a recognition of “Global Britain”, even if reality is far different.

One job, Boris. Don’t pick a fight with the European Union. Don’t repeat falsehoods about the Northern Ireland Protocol, threatening to break it, the agreement with the EU, and international law.

On Saturday, French President Emmanuel Macron met Johnson and proposed a “reset of the Franco-British relationship”, provided the UK Government agreed to the Brexit deal.

But by then, Johnson and his inner circle had already fouled the G7 nest. They primed their preferred English outlets, including The Telegraph, that Macron had disgracefully suggested that “Northern Ireland was not part of the UK”.

They linked the remark to the whipped-up “sausage war” — following May’s “fish war” — of the EU threatening the supply of pork products from Great Britain to Northern Ireland. Johnson had asked Macron “what he would do if sausages from Toulouse could not be moved to Paris”, triggering the Frenchman’s supposed sin that “Paris and Toulouse [are] both part of the same country”.

The French noted that the Prime Minister’s office was being economical with the truth — some would say lying — in their leak to the media. Macron had not said Northern Ireland was outside the UK. He had noted, correctly, that Northern Ireland is on a different island from Great Britain (England, Scotland, and Wales).

But, damn the truth, the Prime Minister has his fist-pumping tabloid headlines. “Boris Johnson Engages in Tense Standoff with Macron”; “Boris Johnson Demands EU ‘Gets It Into Their Heads'”; “Sausage Wars: Boris Turns Up Heat”. Even the normally-detached Reuters joined in: “EU and UK’s ‘Sausage War’ Sizzles at G7″. The Daily Mail added the latest English victory, “Boris Johnson Trolled Macron With Jibe About Vintage Wine from ‘When France Last Won A Naval Battle”.

On Sunday morning, as leaders gathered for the summit’s second day, Foreign Minister Dominic Raab raised the battle standard again. He repeated that the EU were legally “purist” — in other words, observing the Brexit agreement and international law — about the Northern Ireland Protocol. He repeated the distortion, expanding it beyond Macron, “We have serially seen senior EU figures talk about Northern Ireland as if it was some kind of different country to the UK.”

Having done so, Raab declared, “We need a bit of respect here.”

The Sun headlined, “Bangers and Clash”.

You had one job, Boris, and you stomped all over it.

To understand why, it’s valuable to remember the cul-de-sac into which the Government has driven over Northern Ireland and the Brexit agreement.

To avoid a “hard border” between the North and the Republic of Ireland, the UK and the EU agreed to a “customs line” down the Irish Sea. Goods moving between Great Britain and Northern Ireland — on two different islands — would be subject to inspections and customs documents.

UK ministers such as Michael Gove assured that, when the agreement took effect on December 31, 2020, technical infrastructure would be in place to make the customs arrangements a light touch. There would be little hindrance to the movement of goods.

The Johnson Government had two alternatives: negotiate with the European Union, while working on the infrastructure, or undermine the Protocol.

Up to early March, the faction for negotiations still held sway. Gove was in discussions with the EU’s
Maroš Šefčovič, agreeing a grace period until July over implementation of food safety rules.

But Johnson has never accepted the Protocol. During the campaign for the December 2019 General Election, he was economical with the truth — some would say lie — that there was no customs line down the Irish Sea. He oversaw the attempt last September to scrap the provision unilaterally, breaking international law.

So Gove was suddenly replaced with David Frost, who promised a harder line with the EU. The discussions were frozen, as the July expiry of the grace period approached.

After another fruitless meeting with Frost on June 9, Šefčovič warned that the EU’s patience was “wearing very, very thin” and that the bloc would act “swiftly, firmly and resolutely” if the UK did not respect the terms of the Brexit agreement. Tariffs could be imposed on UK goods if there was no resolution.

The European leaders drove home the general message of a unified position. Macron’s office put out a pre-summit photo of the French President, German Chancellor Mario Draghi, Italian Prime Minister Mario Draghi, and the EU’s Ursula Von der Leyen and Charles Michel sitting outside a seaside café: “As always, the same union, the same determination to act, the same enthusiasm!”

So, damn the G7, Johnson’s camp decided to hit hard. The Prime Minister threatened to set aside the Protocol. Frost wore Union Jack socks to a summit meeting. The Daily Mail heralded the latest English victory, “Boris Johnson Trolled Macron With Jibe About Vintage Wine from ‘When France Last Won A Naval Battle”.

All of which begs the question: what did Johnson’s tactics achieve?

“Sausage wars” did not shift the EU. To the contrary, Von der Leyen and Michel told Johnson, publicizing the message, “The Good Friday Agreement and peace on the island of Ireland are paramount. We negotiated a Protocol that preserves this, signed & ratified….Both sides must implement what we agreed on. There is complete EU unity on this.”

The Biden Administration is frustrated with the UK Government. On the eve of the summit, the senior US diplomat in London, Yael Lempert, delivered a diplomatic démarche — effectively a reprimand — to Frost over the threat to the Protocol.

Canada and Japan maintained a polite science, but “Global Britain” came out of the G7 even more isolated.

Of course, this cannot be admitted by Johnson. (You had one job, Boris.) Retreat risks public humiliation, after all the calls to battle. So the Government will resort to diversion.

Two days after the summit ended, Downing Street trumpeted the signature of an outline for a UK-Australia trade deal. Johnson, with his typical grand statement, proclaimed a “historic” accord.

But the deal is not so grand. If and when it is completed, it will add a far-from-historic 0.01% to 0.02% to UK Gross Domestic Product. Services and investment are not covered, and Australia is already a relatively-open market for British goods.

Meanwhile, UK farmers are concerned about the challenge of Australian imports. The UK Government claimed “a cap on tariff-free imports for 15 years”, but the Australian Trade Ministry said all tariffs will end in five years for dairy products, and after 10 years for beef and lamb.

The challenge is accentuated by London’s possible acceptance of far lower Australian health and safety standards for livestock. Battery cages for poultry, sow stalls, and hot branding are legal. The regulations for live exports, including protection from intense heat and provision of food and water, are much more lax. Hormone-fed beef is permissible.

Perhaps Boris Johnson does have only one job, but it’s not the one we expected for the G7 Summit.

Perhaps that job is just to maintain his personal allure of power. Maintain it despite the cost to the G7, the UK’s relationship with many other countries as well as with the European Union, and even the security of the Union, at least when it concerns Northern Ireland.

Perhaps his job, amid the nine leaders on that Cornish beach, was to stand alone.